Energy consumption in Australia witnessed average annual growth rate of 0.6% since the last ten years, reaching 6,172 petajoules in FY18. Interestingly, every petajoule consumed contributed ~A$294 million in GDP. The pie of energy mix included 39% of oil followed by 30% of coal, 25% of natural gas and remaining from renewable energy sources in FY18.

The demand for oil and gas is expected to further increase due to the fuel need for automobiles, power sector, industries and indirectly to electric vehicles (electricity generation) to mention few. In the milieu of which, it is quintessential to overview the recent quarterly publication of the sector players.

For the same, let us gauge through the OSH and COE quarterly reports, published on 28 January 2020.

Oil Search Limited (ASX: OSH) is an Australia-listed oil exploration, development and producing company. The OSH interest lies in Papua New Guinea (PNG), with the company holding a 29% interest in ExxonMobil-operated PNG LNG Project and a material interest in the Elk-Antelope and P'nyang gas fields, which are likely to strengthen the planned construction of three additional LNG trains. Moreover, the company holds interests in the Pikka Unit in Alaska’s North Slope, US.

Oil Search production increased by 3% from the previous quarter to 7.01 million barrels of oil equivalent (mmboe) in the December 2019 quarter. Out of which, PNG LNG Project contributed around 6.3 mmboe net to OSH, based on the whopping 8.5 million tonnes per annum (MTPA) gross production rate.

The quarter was also proved to be beneficial for revenue collections, as over 24% growth was observed to US$446.7 million from the previous quarter, mainly because of higher recovery in production, shipment timings, and higher realised oil and condensate prices.

PNG LNG Production: The record gross production from PNG LNG increased by 2% from the previous record reached in 2017, and the stronger Q4 helped full-year production (2019) to reach 27.9 mmboe. This was despite the volumes being impacted by the scheduled plant maintenance and curtailment in output during Q2 and Q3, respectively, in addition to repairment work at the Kumul Marine Terminal offshore liquids loading facility.

In October 2019, around ten legislative amendments for the PRL 15 (Papua) Gas Agreement were passed. Moreover, discussions between PRL 3 (P’nyang) JV and the PNG Government related to the terms of the P’nyang Gas agreement continued. The decisions are yet to be finalized.

The JV members are prepared to progress the three-train LNG expansion into the Front-End Engineering and Design (FEED) phase, subject to the P'nyang Gas Agreement completion. Also, to sell additional production from the PNG project, discussions are underway with potential Asian customers, which are too subject to JV entering into the FEED arrangement on the expansion projects.

Pikka Unit Project: The Board approved entry into the FEED phase for the development of Pikka Unit in December 2019. The project is expected to start early production by late 2022 with an initial rate of up to 30,000 barrels of oil per day (bopd). At the full field development, it is likely to produce ~ 135,000 bopd from >100 wells from three well pads, through a new Nanushuk Central Processing Facility, which is scheduled to become operational in late-2024.

OSH has also planned to sell up to a 15% interest in the project and other Alaskan leases, with a sale targeted to be completed by the second half of 2020.

Similar to the previous quarter, OSH ended Q4 with US$1.15 billion in liquidity, encompassing US$396.2 million in cash and US$755.7 million in undrawn credit facilities. Also, PNG and Alaska Pre-FEED, exploration and development activities along with a scheduled PNG LNG project finance principal repayment were funded predominantly out of cash flows from operations. 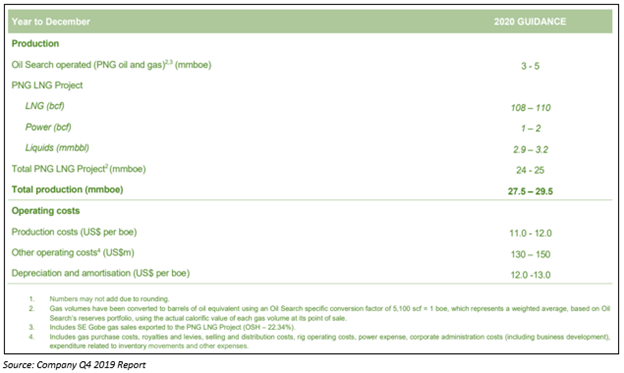 Cooper Energy Limited (ASX: COE) is an Australian listed oil and gas company, focusing on finding resources, as well as developing and commercialising the projects. The primary assets of the company are low-cost oil production from Cooper Basin, Otway Basin and Gippsland Basin.

Cooper Basin: The attributable oil production from the company’s Cooper Basin tenements in Q4 2019 or the December 2019 quarter was 48.1 kbbl (average 523 bopd) in comparison to previous quarter 52.1 kbbl (average 567 bopd) production. The share of COE in the basin includes ~25% in the PEL 92 joint venture and 30% at the oil-producing PPL 207.

Otway Basin: In Q4 2019, the attributable output from its offshore assets was 1.34 PJ of gas and 0.68 kbbl of condensate from Casino Henry. The lower production in comparison to the September 2019 quarter was due to the depletion of a well along with the cessation of Minerva gas field production and planned two-week shutdown at the Iona Gas Plant.

While, at the onshore, the flow test was completed to gauge the initial deliverability, existence of any reservoir boundaries and minimum linked volumes. The analysis reveals that the maximum measured gas rate surpassed 18 MMscf/d, reflecting good reservoir productivity.

However, assaying is currently halted by the Victorian state government, according to the moratorium on onshore gas exploration till June 2020.

Gippsland Basin: The company holds 100% of Sole gas field, Manta gas and liquids resource, Patricia-Baleen gas field, and exploration permits (VIC/P72 and VIC/P75) in the Gippsland Basin. It is planning to deliver ~24 PJ per annum from the Sole Gas project via the advancement of the Sole gas field and development of the Orbost Gas Processing Plant. In line with the same, COE started the upstream work to construct and link the gas field to the Processing Plant.

The commissioning of the plant was interrupted by the bushfires between December and January and hence the first phase of gas commissioning has been postponed to the latter half of February 2020 with full ramp-up expected before mid-March.

Whereas, the next step for Manta project involves planning the appraisal well, Manta-3, which would also evaluate the Manta Deep exploration potential. The well is to be optimised for best sequencing within the next offshore drilling campaign, which is expected to commence in 2021 and is subject to the availability of rig.

Also, on 3 September 2019, the VIC/P75 permit was granted to the company, situated in the centre of the Gippsland Basin bordered by key oil and gas fields. The permit is approved for a period of 6 years, of which the first 3 years is to encompass a guaranteed work program involving seismic reprocessing and geological or geophysical studies.

Tags:
ASX: OSH oil and iron ore
All pictures are copyright to their respective owner(s).Kalkinemedia.com does not claim ownership of any of the pictures displayed on this website unless stated otherwise. Some of the images used on this website are taken from the web and are believed to be in public domain. We have used reasonable efforts to accredit the source (public domain/CC0 status) to where it was found and indicated it below the image.