Letâs have a look at the recent developments of these three companies.

MLD, through a release dated 20th November 2019, announced to have secured a letter of award from a subsidiary of First Quantum Minerals Ltd, namely FQM Australia Nickel Pty Ltd. The letter of award is related to open pit mining services at the Ravensthorpe Nickel Project.

While commenting on the selection of the company as the preferred contractor, MACA Operations Director Geoff Baker stated that MLD is looking forward to developing a long-term working relationship with the First Quantum team at the project, which would generate 230 job opportunities, thereby aiding the local and regional communities.

On 19th November 2019, MACA updated the market regarding the issue of 1,906,909 performance rights, granted as equity compensation benefits to senior executives pursuant to the Performance Rights Plan of the company. The rights are vesting on 30 June 2022.

Also Read: MACA Limited reported a decline of 27% in its EBITDA in 1H FY19.

CIMIC Group Limited (ASX: CIM) is one of the leading global contractors, operating as a construction, mining and project development group. 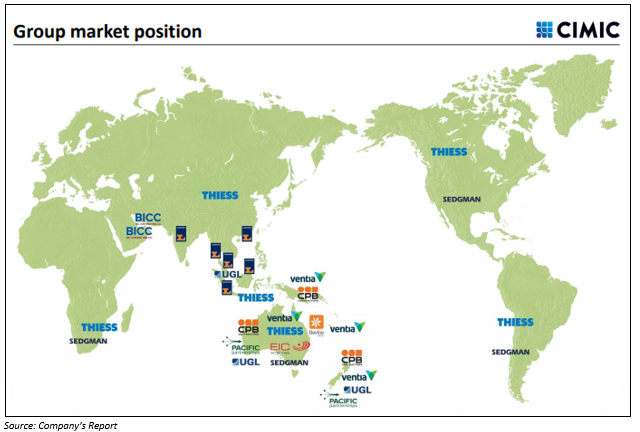 In a market release at the end of October 2019, CIMIC informed that its segment CPB Contractors won a design and construct contract, under which it would work on an upgrade to a northern section of Melbourneâs M80 Ring Road.

Recently, the company updated the market with results for nine months to 30th September 2019, wherein it reported growth in net profit after tax (NPAT) and solid operating cash flow.

For the remaining 2019, the company unveiled a pipeline of construction, mining and services opportunities worth $20 billion. Subject to market conditions, the company affirmed guidance for NPAT in the ambit of $790 million to $840 million during FY19.

Worley Limited (ASX: WOR) provides professional services in order to help its customers with project engineering, procurement and construction. The company is also engaged in offering consulting and advisory services.

The company through a release dated 19th November 2019 announced to have secured a framework agreement by Covestro Deutschland AG.

The company with the help of a release dated 12th November 2019, stated that XENDEE Inc. and Worley Group Inc (a wholly owned subsidiary of Worley Limited) have created a USA incorporated joint venture, named as VECKTA Corporation