How Has CIMIC Performed Over Last One Year?

The construction industry is one of the most thriving industry, which is concerned with building and renovating of the real estate properties. This industry can be grouped into:

The construction industry in Australia tumbled in recent years but is all set to return to its momentum. Emphasising on the pessimistic outlook for the residential sector in the current year, the industry’s output value in real terms is expected to rise. The increasing citizens of the country is impacting the growth in demand for the new constructions in both the domestic and industrial space. The non-service-related industry of Australia, the construction sector can be best characterised by the significant contribution of GDP.

The construction sector not only produces the higher GDP but also employ a large number of people in many distinct positions. Let us have a glance at one such company:

CIMIC Group Limited (ASX: CIM) is the parent company of Australia's largest project development and contracting group. It is engaged in construction, mining and mineral processing, public private partnerships, engineering and other services with a market cap of $10.69 billion (as on 1 November 2019).

CPB Contractors won the contract to deliver an upgrade to a northern section of Melbourne’s M80 Ring Road, which will enhance capacity, reduce overcrowding and improve safety for drivers and the work includes broadening and realignment of ramps, the construction of additional lanes, structural works, installation of a smart freeway management system, street lighting, traffic barriers, noise walls and landscaping. M80 upgrade will generate a revenue to CPB Contractors of approximately $331 million, the construction of which is likely to start in early 2020

Broad Construction has been selected to deliver stages 1 and 2 of the new Inner-City South State Secondary College in Brisbane, generating a revenue of approximately $110 million to the CIMIC Group. The new educational amenities include learning hubs, creative hub, multipurpose hall, administration and staff centre, canteen and health and wellbeing hub, learning plaza, outdoor areas, outdoor court, carpark, pick up and drop off zone and end of trip facilities.

CPB Contractors has been picked to deliver the next stage of works on the Sunbury Line Upgrade in Victoria, which will deliver power and track upgrades to back High Capacity Metro Trains travelling through the Metro Tunnel. The project will also renovate the open, already existing lines which comprises of overhead electrification related works amid Sunbury and South Kensington and at South Yarra, indicating power upgrades and further infrastructure at Calder Park sidings area. The project will help in generating an income of approximately $158 million.

The new Sydney Metro City & Southwest Pitt Street Station project was given to CPB Contractors, which will generate an income of $463 million to CPB. In five years, Sydney Metro is expected to deliver 31 metro stations.

CIMIC Group Limited has paid a fully franked interim dividend of 71 cents per share on ordinary fully paid shares on October 3, 2019 and has returned $294 million to its shareholders through dividends and share buyback.

Business Highlights: The company has secured a number of projects during the year and reached contract award for the $900 million Rail, Integration and Systems Alliance package of Brisbane’s Cross River Rail, and Thiess was awarded a $1.3 billion mining services extension at the Curragh Mine in Queensland. 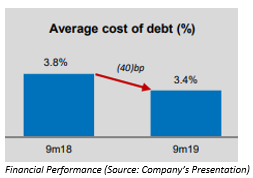 Outlook: The company came up with an optimistic outlook across the Group’s core markets. The mining market is expected to strengthen, and strong PPP pipeline will offer prospects in Construction and Services. The strong balance sheet offers flexibility to engage in tactical growth initiatives and capital allocation opportunities, and to deliver shareholder returns.

Stock Performance: The company took a number of important projects during the third quarter including a six-year contract extension secured by Thiess, CPB Contractors reached contract award for the Rail, new Sydney Metro City and Southwest Pitt Street Station etc. The company also demonstrated a stability in revenue and a strong EBITDA growth.