Meat Industry in the US and a Look at Beyond Meat

Undebatable to state that we need food to survive, and the meat industry is one of the elements that satiates this need while aiding businesses to make some bucks as well. In the past, few cultures considered the consumption of meat to be a luxury and occasional affair. However, presently, this section of food is one of the staples, with increased consumption and better availability.

The Meat industry deals with all the activities pertaining to an industrialised aspect of the livestock- production, packing, preservation and marketing of meat. The industry includes activities related to the agricultural segment as well as the industry segment.

The top three meat producers of the world are JBS S.A, which is a Brazilian company, followed by the American multinational, Tyson Foods and Shuanghui, a Chinese company.

The Meat Industry in the US: The US is amongst the biggest producers and consumer of meat and its supplements. According to the United States Department of Agriculture (USDA), Livestock and poultry alone are accountable for more than half of the USA’s agricultural cash receipts, and they often exceed $100 billion per year. The country has the largest fed-cattle industry in the world and is the world’s number one in production of beef, eggs and poultry.

It should also be noted that trade disputes with China, Mexico and Canada also impacts the trade relations of the meat industry, amongst other factors. 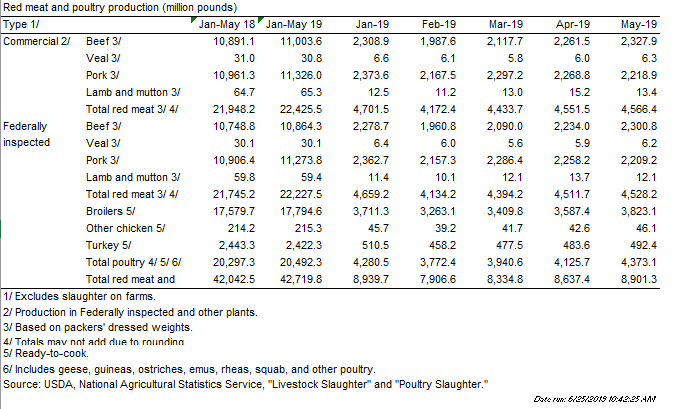 Outlook: As per the USDA’s recent reports, the U.S. agricultural exports for FY 2019 are projected at $137.0 billion, which is down by $4.5 billion, as per the February forecast this year. In this forecast, livestock, dairy, and poultry exports are lowered by $500 million to $29.9 billion. The country’s beef exports have been predicted of $300 million lesser on softer prices and volumes and the pork export forecast is lowered by $100 million. There has been a decline in the global consumer demand for leather goods, hence hides and skins exports are forecast at $200 million lower.

The imports are projected at $129.0 billion, which is up by $1.0 billion from the February forecast, wherein the livestock, dairy, and poultry are raised by $100 million to $17.2 billion.

Further, the U.S. exports of meat and poultry both are anticipated to rise above 4% next year. With less competition in the Asian market, the Beef exports are predicted to rise by 2.7%. With the U.S pork demand rising after tariff removal in Mexico, the Pork exports are anticipated to rise above 7% in 2020. Even broiler and turkey exports would increase by approximately 3 per cent. On the flip side, Lamb and mutton exports and eggs and egg products might witness a decline in exports in the next few months.

As per market experts, the meat production in the US this year would be marginally up compared to last year and would amount close to 103 billion pounds, even when the Per capita consumption is expected to decrease.

Are the substitutes taking over the meat industry? Apart from the mainstream industry knowledge, it is interesting to understand that climate change, increased discussions on sustainable and inter-dependant surroundings, animal welfare concerns and wellness drive, has taken the meat industry to an advanced level off late, as groceries and food joints are taking interest in plant-based meat substitutes.

In the light of the contexts discussed so far, let us look at few Meat Company Stocks that trade on the New York Stock Exchange (NYSE):

Another stock on the NYSE, pertaining to the meat industry is Beyond Meat Inc, which trades with the ticker BYND on NASDAQ. Let us now have a quick glance at this meat stock:

Beyond Meat’s Profile: Founded in 2009 by Ethan Brown and based out of Los Angeles, Beyond Meat is a producer of meat substitutes via plants. The company believes in its mission to create “The Future of Protein®”. BYND makes products that bear potential to replace chicken meat, beef and pork sausage. The company’s headquarters are in El Segundo, California and its products were available across the US in 2013. Also, in 2016, the first plant-based burger was sold internationally by the company.

Tyson Foods, amongst the top three global giant meat producers of the world, contributed in BYND’s venture funding amongst other associations and later purchased a 5 per cent stake in the company as well, exiting the investment recently in April, prior to BYND’s initial public offering.

BYND’s Financial performance: The company had recorded a revenue of $33 million in 2017, which rose to be $87.9 million in 2018. In the first quarter of 2019, the net revenues of the company were $40.2 million, depicting an increase of 215 per cent. The Net loss was $6.6 million, a better position when compared to the loss of $5.7 million in the year-ago period. The company’s adjusted EBITDA was a loss of $2.1 million ($4.3 million loss reported in the year-ago period).

On the outlook front, the company expects to generate Net revenues of above $210 million (140 per cent more than 2018) and a break-even EBITDA.

Company milestone: The company was bestowed with the award- Company of the Year in 2013 by the People for the Ethical Treatment of Animals (PETA). There was an increase in the company’s manufacturing space, when in June last year, BYND opened its second production facility in Columbia, Missouri.

Recent Updates: On 26 June 2019, the company announced that it was ready to launch, what it refers to its “latest product innovation”- Beyond beef®, which would be the first plant-based ground meat made without gluten, soy or GMOs.

On 20 June 2019, the company announced that Del Taco would be expanding its Beyond Meat menu options, with Beyond 8-Layer Burrito and Epic Beyond Cali Burrito. The rise in popularity of plant-based burgers is most likely to provide an extra edge to the company.

Beyond Meat in the market: The stock of the company was an instant blockbuster when it started trading on NASDAQ in May this year. As per the industry experts, the company’s stock was believed to register as the year’s best first day for a U.S. initial public offering. The initial public offering of the company was $25 per share. The IPO opened at $46 and closed its first day of trading up by almost 160 percent to $65.75. This took the market value of BYND to about $3.8 billion. Ever since, the company’s stock has soared by approximately 550 per cent, in the middle of June 2019. The market value of the company is close to $9 billion.

The company is well expanding and growing, even in times of the forecasted competitive environment, with speculations that its peer Impossible Foods and big players like Tyson Foods and Nestle would be enhancing and launching their respective plant-based meat substitutes, soon. 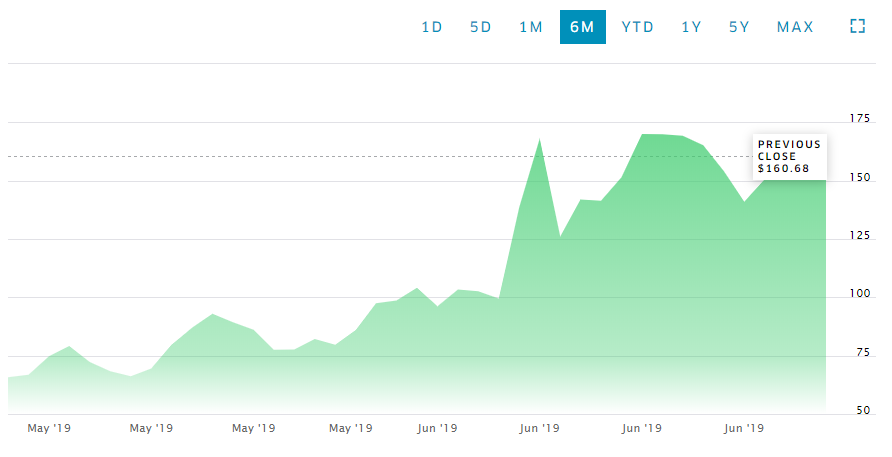