Chinaâs Vice-Premier Liu He, who leads the trade negotiations from the Chinese side, and US Trade Representative, Robert Lighthizer and US Treasury Secretary, Steven Mnuchin held telephone talks regarding economic and trade issues between China and the United States on 24 June 2019, as per the Chinese state media reports.

Both the sides have come to an agreement to continue with the communication. The talks between the top trade negotiators from the two countries were in line, with the instructions made by Chinese President Xi Jinping and US President Donald Trump, who are set to meet on the sidelines of the G20 summit in Japan. Beijing and Washingtonâs representatives have confirmed to meet face to face for discussions regarding their tense bilateral relation in recent years. A close watch over whether the two economies reach a breakthrough in their trade conflict is expected during the G20 economic summit, which is scheduled to be held at the International Exhibition Center in Osaka on 28 and 29 June 2019.

The call seems to be a positive sign that the two sides might restart negotiations to resolve their trade dispute. Meanwhile, a top Chinese official stated that both the sides would be required to make some compromise in order to reach a trade deal.

In 2018, the two economic powerhouses-imposed tariffs worth hundreds of billions of dollars on each otherâs imports. Initially in July 2018, the United States President, Donald Trump slapped a 25% border tariff on $34 billion worth of Chinese products like steel, aerospace and machinery that it imports from the Asian country, claiming to punish China for some of its most controversial trade practices. In a retaliative gesture, China also imposed a 25% tariff on the United States products like automobiles and soybeans worth $34 billion. China accused the superpower of initiating the largest trade war in the global economic history till date. So far, the United States has set tariffs on Chinese imports worth USD250 billion.

In May 2019, negotiations between the two largest economic powers in the world stalled. Recently, the US Head, Trump threatened to again hit the Asian economy with a tariff on products imported from China worth USD300 billion. The new tariffs, if imposed, would affect consumer products like clothing, computers and mobile devices.

Countries get into disputes over trade several times, however, this one between the two major superpowers (US and China) is rocking markets across the world, as well as resulting in a stagflationary outlook for the global economic growth by dampening global trade and undermining confidence. The ongoing tensions over trade agreements between the two largest economies in the world are expected to have long-term ramifications for global trade.

As per a statement by the International Monetary Fund in late-2018, if the trade dispute isnât resolved and US-China talks fail, the world could become âa poorer and more dangerous placeâ. The IMF, in April 2019, lowered its global growth forecast to 3.3%. This growth forecast is the lowest predicted by the IMF since the global financial crisis. Additionally, in May 2019, the Organisation for Economic Co-operation and Development reduced its forecast to 3.2%, factoring in the ongoing tensions between the US and China. Nearly $450 billion worth of global trade was impacted by the tariffs imposed by the US administration throughout last year, as per the World Bank.

The tensions between the two countries (US and China) are frustrating for Australia, as the trade war could have an impact on the country (Australia) as well. Though the country hasnât felt much of the effect of the trade tensions, Australia could suffer if the ongoing trade dispute escalates further. Australia has rich resources, including thermal, gold, coal and iron ore. It is majorly an export-based economy, with exports contributing nearly 22% to the countryâs GDP. Any policy changes that impact the markets where Australia exports would have a significant effect on its economy.

Australia is in a complex position between the two superpowers, as China is its major trading partner, while with the United States, Australia has a close relationship as the latter is its leading investor. Any negative impact on either of the countries is likely to have a consequence on the Australian economy.

In 2018, China accounted for over 30% of Australiaâs exports, reflecting that the direction of Australian exports is nearly towards China, according to data from the Department of Foreign Affairs and Trade of the Australian government. The figures below depict the trade relationship between China and Australia. 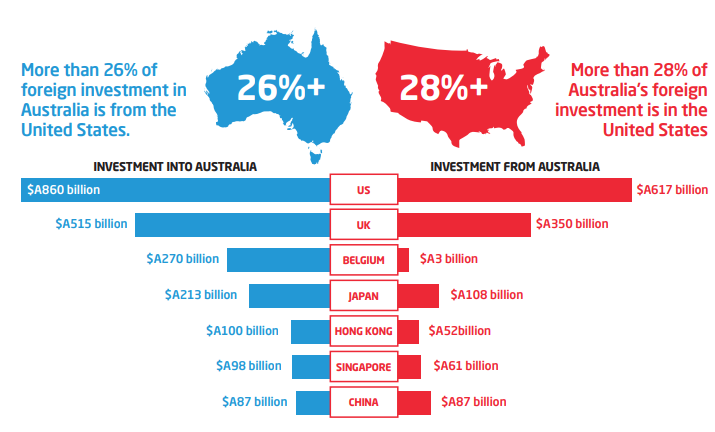 Source: US Studies Centre at the University of Sydney

Interest rate cuts, recent dip in the Australian dollar, increasing unemployment rate, declining housing prices and growing trend of negative equity from recent homebuyers are all reflecting how the Australian economy is performing.

Australia is currently in the 28th consecutive year of registering economic growth. It is the only country across the globe that has maintained this long-period of uninterrupted economic growth by managing to deliver a solid economic performance. According to the World Economic Outlook April 2018 by the IMF, the Australian economy was forecasted to outperform every other major advanced economy of the world and realise an average annual real GDP growth of 2.7% between 2019 and 2023. Though the Australian economy is capable of sailing through any crisis, it does not underestimate the challenges that it might face globally with trade tensions and is prepared to continue to grow. 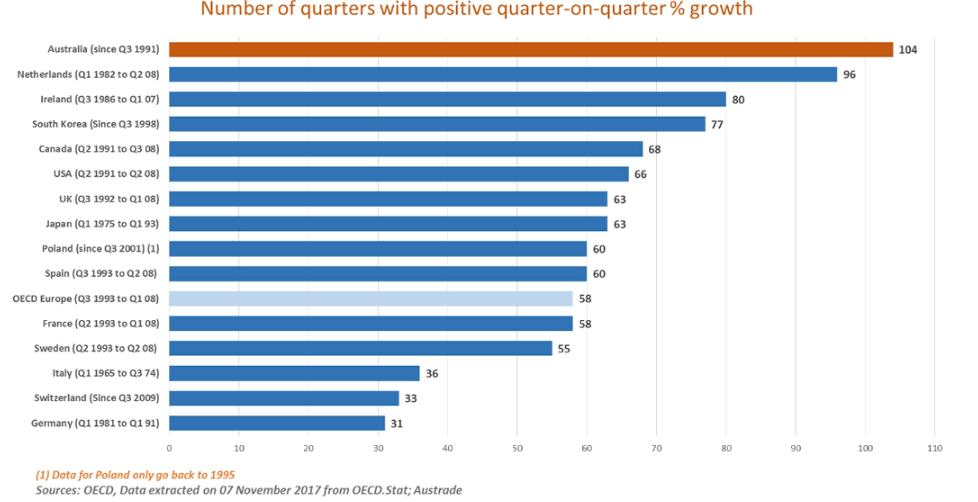