Consumer staples sector is one of the most important sectors in every economy, which enables the provision of essential goods to consumers. The goods supplied by the consumer staples companies are the ones the consumer will not cut out of the budget in case of an economic downturn. Therefore, the consumer staples goods always remain in demand, even during a recession, when people tend to reduce their expenses.

The importance associated with the sector makes the consumer staples’ stocks an interesting and attractive form of investment. There are multiple consumer staples companies listed on the ASX that are categorised under the S&P/ASX 200 Consumer Staples Index or XSJ. The index has delivered a pleasing return of 17 per cent in the last one year (calculated till 24th October 2019). 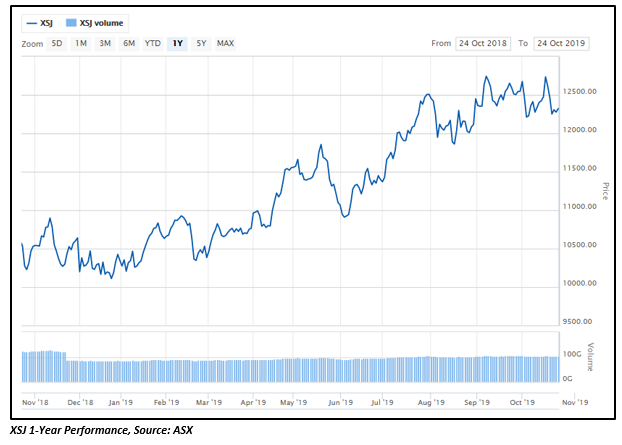 Let us discuss three ASX-listed companies operating in the consumer staples sector below:

The iconic brand of Australia, Elders Limited (ASX: ELD) has been a leading agribusiness throughout regional and rural Australia. The company has proficiently combined agribusiness knowledge and technical expertise to develop specialised services and products. The company offers many services to primary producers, endorsing their requirements over the entire production cycle.

In a recent update on the ASX, the company provided an update in relation to proposed acquisition of AIRR Holdings Limited by a scheme of arrangement. The company mentioned that the AIRR Holdings Limited's shareholders have approved the necessary resolutions to give effect to the Scheme for the proposed acquisition of 100 per cent of the fully paid ordinary shares in AIRR by Elders.

Elders and AIRR entered into a scheme implementation deed in July 2019 to acquire 100 per cent of AIRR’s shares for $10.85 per share.

As per Elders, AIRR will seek approval of the Scheme in the Australia Federal Court on 29th October 2019.

The company reported its half-year results for the period ended 31st March 2019 on 20th May 2019. The company recorded statutory net profit after tax of $27.4 million during the half-year, against a profit of $41.4 million announced in the prior corresponding period (pcp).

The company’s underlying EBIT was at $33.5 million in first-half, lower than the figure of $45.8 million recorded in pcp. The company noted an operating cash outflow of $13.1 million and an underlying return on capital of 18.4 per cent for the period. In addition, it declared a fully franked interim dividend of 9 cents per share.

ELD ended the trading session at $5.98 on 25th October 2019, with a fall of 1.16 per cent relative to the last closed price. The stock has delivered negative returns of 3.39 per cent, 15.86 per cent and 3.66 per cent during the last six months, three months and one month, respectively.

Natural health company, (ASX: BKL) is a leading company of Australia that currently employs more than 1,400 people in well-known markets across Asia-Pacific. The company was founded by naturopath pioneer Maurice Blackmore in 1932. The company won the prize for the Most Trusted Brand of Australia for vitamins and supplements in 2019.

As per Blackmores’ Chief Executive Officer, Mr Alastair Symington, the manufacturing facility will support the company’s strong focus on product innovation and growth, with improved R&D capabilities, and offer greater control over production.

The company also notified that the facility will be fully operational from 28th October 2019 and will supply about half of the company’s tablet and capsule requirements.

On 15th August 2019, the company published its full-year results for the period ended 30th June 2019. The company reported the following: 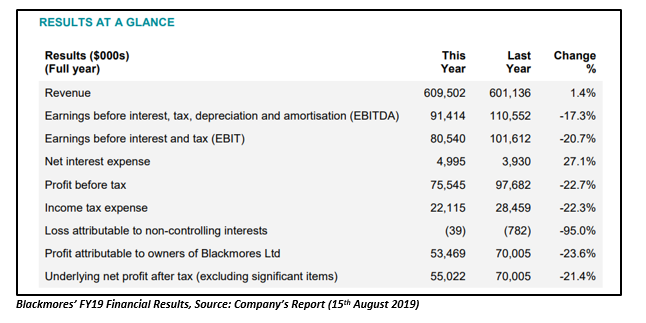 New Zealand and Australia’s biggest integrated poultry producer, Ingham’s Group Limited (ASX:ING) has a stable reputation for service and quality. The company’s model of business is vertically integrated, comprising 345 facilities and farms throughout Australia and New Zealand. The company also supplies a broad range of high-grade stockfeed to the dairy, pig, equine and poultry industries.

On 16th September 2019, Ingham’s released its annual report for the 12 months ended 30th June 2019. Below are the key highlights of the company’s annual report: