Despite these headwinds, CBA shares are still trading at a premium to its Big Four brothers. If compared by the most basis measure of valuation- price to earnings ratio, CBA has P/E multiple of 16.610x at current market price (as on 20 November 2019). This premium is obvious if we compare it with other four banks like NAB is sitting at a P/E multiple of 15.890x, WBC at 13.510x and ANZ at 12.100x (as on 20 November 2019).

Why is it trading at a Premium?

Also, in business lending, CBA has lifted its market share from 13.6 percent to 16.6 percent as per APRA data.

This shows that CBA is leveraging its dominance and branding in a very effective way as the banking sector of Australia is a very competitive landscape and CBAâs increasing ascendancy is a sign of a âwide economic moatâ.

Commonwealth Bank of Australia has confirmed that the bank has issued and allotted 16,500,000 CommBank PERLS XII Capital Notes to successful Applicants at the application price of $100 each, raising $1.65 billion.

PERLS XII are expected to commence trading on ASX under the trading code âCBAPIâ as follows:

The first distribution will be $0.9188 per PERLS XII and the distribution rate of 2.7488% was calculated as follows:

The distribution is expected to be fully franked.

The CEO of Commonwealth Bank, Mr Matt Comyn announced on 13 November 2019 that there were some changes made to the Groupâs Executive Leadership Team. Adam Bennett has decided to leave the Group by the end of January 2020.

In this challenging environment, highlighted by global macro-economic uncertainty and historical low interest rates, the Bank remains well placed. The Companyâs strong balance sheet and capital position were well placed to meet the need of the customers demonstrated by good volume growth in its core markets of home lending, business lending and household deposits. 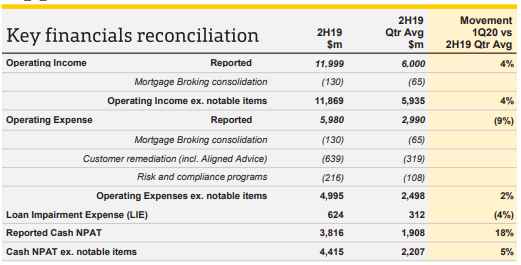 On 1 November 2019, the bank announced that the joint co-operation agreement with AIA Australia Limited (AIA) in relation to CBAâs Australian life insurance business (CommInsure Life) has been executed.

Commonwealth Bank has received an upfront payment of $500 million from AIA and the full economic interests associated with CommInsure Life have been transferred to AIA, with AIA attaining an appropriate level of direct management and oversight of the business.

The Australian distribution agreement between CBA and AIA of 25 years, has also initiated.

Commonwealth Bank of Australia expects its operating context to remain challenging as it adapts to heightened regulatory change, increasing competition, evolving customer preferences, and the need to invest in risk and compliance, and technology and innovation. It is focused on continuing to serve its customersâ needs and making the necessary changes to become a simpler and better bank.