Founded in 2006, Redbubble Group, which owns and operates Redbubble and TeePublic online marketplaces, has provided artists with a platform to showcase their talent and sell their creations. The group is connected with over 700k artists and designers, globally, with millions of passionate fans. On 23 October 2019, the group released first-quarter FY 2020 business update for the period ended 30 September 2019. 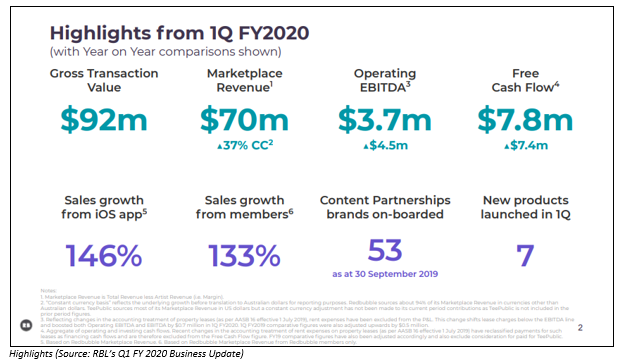 Further, gross profit margin increased 1.5 percentage points to 37.9%, based on marketplace revenue. The operating EBITDA profit of $3.7 million represents an improvement of $4.5 million from a loss of $0.8 million in Q1 FY 2019.

The group’s topline is being propelled by strong growth rates witnessed from TeePublic. Previously, the group had notified that Q1 FY2019 was strong and revenue growth of the September 2019 quarter was consistent with management expectations in Q1 FY2020.

According to the release, during Q1 FY2020, the group generated strong operating leverage with 48% gross profit growth, which was more than the growth of 22% in expenses that include an aggregate of operating and marketing expenses.

In Q1 FY 2020, the group demonstrated its prowess to generate improving gross margin and increase the effective take rate. The group’s branded marketplace is optimising its marketing, resulting in a short-term reduction in marketing spending. The branded marketplace is shifting from higher-cost marketing channels to brand associated channels that involve low cost. This process also involves improving customer retention through the Redbubble iOS app or other free or low-cost channels.

Further, it was said that both Redbubble and TeePublic are continuing to register profitable growth on the initial transaction from paid channels, with TeePublic continuing to boost Google Shopping.

The accounting change in AASB 16 was effective from 1 July 2019, resulting in the exclusion of rent expenses recognised on property leases in the P&L. It was mentioned in the group announcement that this change shifts lease charges below the EBITDA line and added $0.7 million to operating EBITDA and EBITDA in the first quarter of FY2020.

The group is progressing well with strategic investments that are crucial for the marketplace growth and profitability in the long run. During the quarter to September 2019, the group’s key initiatives propelled the business.

Further, the group had realised $1.3 million in synergies from the acquisition of TeePublic in the eight months from deal close to end of FY2019, and it is progressing with integration work.

The group has on-boarded a total of 53 brands and five new brands added in the Q1 under the content partners category. During Q1, the group focused on adding content for existing brands, resulting in licensed content growth of 76% on Q-o-Q basis to 620k. In addition, the group launched seven new products in the quarter.

Reportedly, the paid marketing initiative optimised bidding across paid channels, particularly Google Shopping. The group added new brands, including Rick and Morty. In Europe, the group was in a favourable position from the rollout of geo-location redirect and localised currencies in the UK, EU, Canada and Australia.

As per the release, the group is emphasising on executing across its four strategic initiatives and delivering on opportunities for growth prospects. Further, the business continues to demonstrate progress on the key drivers of operating leverage. Presently, the group is focusing on the upcoming holiday season in the immediate term.

On 22 October 2019, the group reported regarding the launch of its sponsored Level 1 American Depositary Receipts Program.

It was said that the group had received approval from the United States Securities and Exchange Commission (SEC) to initiate the ADR program in the country. The group’s ADRs would be traded under the symbol “RDBBY”, representing one ADR for every 10 ASX-listed RBL ordinary share.

Further, the group has appointed The Bank of New York Mellon (BNYM) as the nominated depository bank. The program would allow the group to gain direct exposure to the US capital markets and additional investors.