How tall Could ASX-Listed Iron Ore Miners Stand Against the Backwardation in Iron Ore Futures?

Iron ore prices are in doldrums again over the fall in demand and gradually increasing port stocks in China, the largest consumer of the Australian iron ore supply chain. The industry experts and market participants anticipate the iron ore prices to tumble gradually, which turns all eyes to the number one iron ore supplier to China- ASX-listed iron ore miners.

Iron ore prices rose slightly amid the restocking by the Chinese mills ahead of the national holidays in China, which in turn, propelled the prices to the level of RMB 667.50 (Day’s high on 8 October 2019) from the level of RMB 619.00 (Day’s low on 25 September 2019).

However, the prices again tumbled across the Dalian Commodity Exchange to the level of RMB 633.50 (Day’s low on 10 October 2019) over the increase in supply.

However, the lifted smog alerts in central and eastern regions of China, including the top steelmaking provinces-Tangshan supported the delivery of iron ore from the 35 major ports in China during the period of 5 October 2019 to 11 October 2019.

One of the top steelmaking provinces in North China- Hebei is all set to face a fresh round of environmental supervisions.

On the daily chart, the iron ore prices are consolidating in a narrow channel, which is resembling the bearish flag pattern; however, could not be confirmed as no of consolidation days are larger than the number of days it took for the prices to fall.

On applying the Fibonacci retracement, we can observe that the prices fell below the 61.8 per cent of the initial rally which started from the level of approx. RMB 471.00 to the level of RMB 817.20. The fall of more than 61.8 per cent of the initial rally instigated buyers’ interest, and the prices rose again in the market to reach above RMB 685.00; however, the bears soon took charge, and the prices fell again across the Dalian Commodity Exchange.

The 14-day Relative Strength Index is supporting the bullish stance as the value is above the mean of 50 (is at 54.352) and is rising upwards.

However, one major problem, which the bulls could face is the fall in volume i.e., post falling with heavy volumes, the recovery in prices of iron ore is not followed by heavy volume, which could be either associated to the weak speculative buying or the profit booking from the sellers.

To further investigate, it would be necessary to analyse the future, or the forward curve of the iron ore contracts. 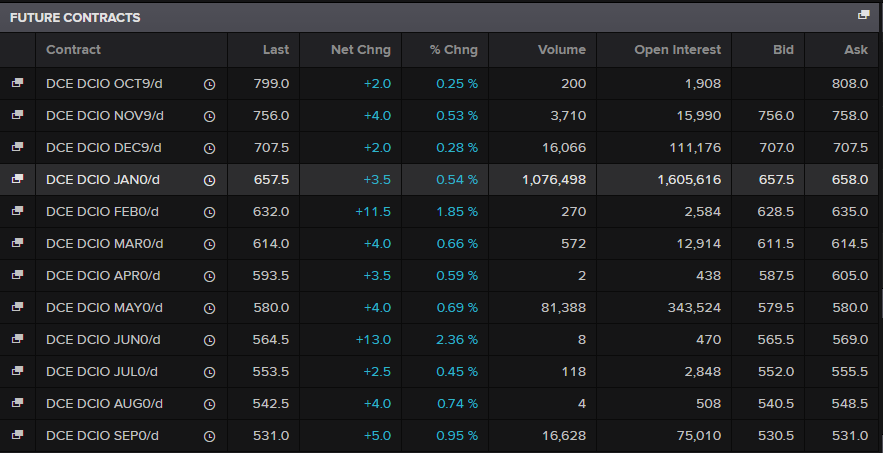 It can be seen from the quote table shown above, that the October 2019 series is in contango from the current series, with 1,908 open interest (i.e. longs and shorts, which is still unsettled), which in turn, establish the short-term outlook positive.

However, the major trend looks negative over the long-term, as other future contracts are in backwardation with highest open interest at the January 2019 series. 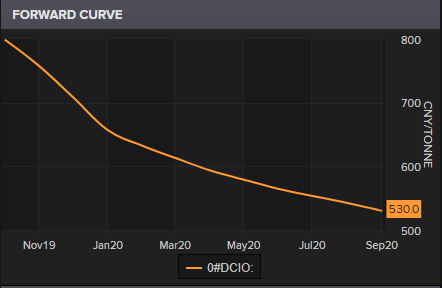 To Know More, Do Read: Things to Be Familiar With Before Fishing for Mining Stocks

ASX-listed iron ore miners such as Rio Tinto (ASX: RIO), BHP Group Limited (ASX: BHP), Fortescue Metals Group (ASX: FMG), which contributes significantly in the Australian economy, are relishing over the short-term positive outlook over the iron ore; however, these miners have multiple-commodity exposure, which reduces their correlation with a single commodity.