Iron ore and steel prices have shown promising recovery across the international markets post and in the middle of the Golden Week holiday session in China, respectively, which in turn, is now diverting all the eyes toward the ASX-listed iron ore and steel stocks.

The iron ore January 2019 future series rose during the session today to the level of RMB 667.5 (as on 8 October 2019 3:34 PM AEST, which in turn, marks an uptick of approx. 5.50 per cent from its previous low of RMB 633.00 before the National holidays in China on the Dalian Commodity Exchange.

The iron ore prices witnessed a sharp surge as mills instigated aggressive buying in the iron ore market post a weekâs holiday amid depleted inventory due to the market close during the National holiday week.

The high steel prices in the international market provided cushion to the falling share prices of steel manufacturers amid opaque steel demand in the global market; however, the re-entry of Chinese steel manufactures and exports in the supply chain after a week-long hiatus could exert some pressure on the steel prices.

The steel prices on the London Metal Exchange that spiked substantially in April 2019 took a jolt and fell to USD 395 per contract from its Aprilâs 2019 peak of USD 488.5 per contract, which marks a downturn of almost 24 per cent.

The steel price plunge exerted pressure on ASX-listed steel manufacturers, and the National holidays in China from 1 October 2019 to 7 October 2019 provided their stocks with a respite; however, the investors are now again keeping the steel manufactures under the radar to notice if the stock prices of these miners would continue the plunge or would they take a detour? 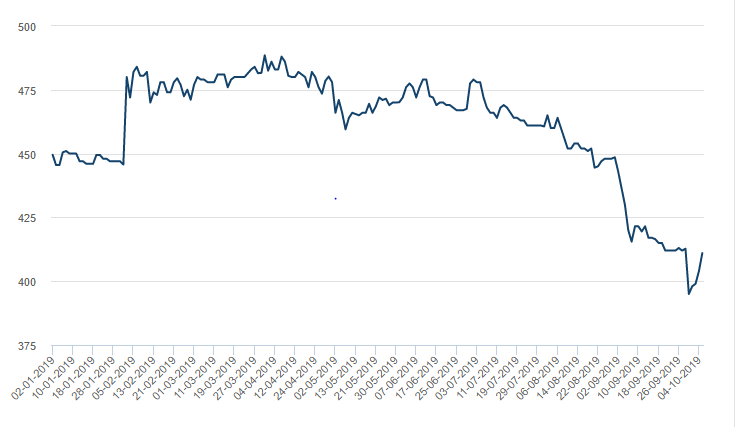 Chinaâs steel production remained robust from January to August 2019 to meet the high domestic demand amid infrastructure push provided by the government. As per the data from the China Iron and Steel Association (or CISA), China produced 55.51 million metric tonnes of more iron and steel in the initial eight months of the year 2019 as compared to the previous corresponding period in 2018.

The higher production was consumed domestically during the period, and the net exports from China dropped by 952,000 metric tonnes against the previous corresponding period in 2018.

The steel production in China during the initial eight months period of January 2019 to August 2019 remained as below:

Apart from topping the production of crude steel and iron products, the stainless-steel production, which utilises nickel as a raw material also witnessed a surge in China.

As per the latest figures posted by the International Stainless-Steel Forum on 3 October 2019, the global stainless steel melt shop production witnessed a 1.9 per cent yearly surge to stand at 26.1 million metric tonnes during the first half of the year 2019, of which China produced 14.4 million metric tonnes of stainless steel, up by 8.5 per cent against the previous corresponding period production.

China which dominated the global steel production during the first half of the year 2019 and later till August, faced the pressure from the escalated trade tussle between China and the United States, which reduced the steel demand in China.

Apart from that, the falling steel prices dragged the profit margins of the steel mills in China, and in turn slowed the production since August 2019; however, the recovery in Steel prices coupled with eased out environmental curbs could again prompt the steel mills to hit the throttle.

In the status quo, China removed the orange alert (when air quality index passes 200 reading for three consecutive days) from the highest steel making provinces of Tangshan, which was implemented ahead of the National holidays.