Nickel is a key raw material for steel industry and the importance of the chemical can be appreciated by the wide range of usage of its other alloys by sectors such as food, telecom, medical equipment, transportation, power, etc. Countries such as Australia, Canada, Indonesia, Philippines, Russia, Brazil, Cuba, Colombia, and New Caledonia are the biggest producers of nickel.

Industry-wise use of Nickel: Stainless steel industry is the prime user of the nickel as a raw material which accounts for ~78% of its total usage. This is followed by EV (Electric Vehicle) batteries, alloys, and plating representing ~3%, ~10% and ~4% of the total usage, respectively. Rest 5% is used by other industries. 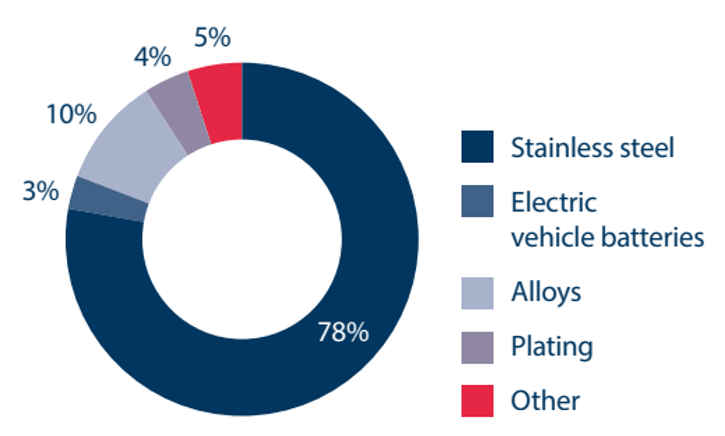 As per LME, consumption of Nickel has been growing at an annual rate of ~4% since 2010 whereas the key user, which is stainless steel industry, has witnessed an annual growth rate of ~6%. The recognition to green energy is playing a significant role for nickel. The increasing growth in electric vehicles and rising developments in battery technologies have led the demand growth of nickel. With decent outlook for nickel, companies are coming up with various plans to meet the growing demand of the same. 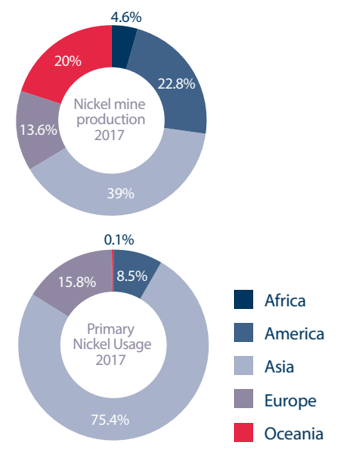 Looking at the long-term trends in vehicle electrification, increasing mobility, growth in renewables, rising population, higher disposable income and urbanisation, growh of nickel consumption and the relevant demand outlook, it can be inferred that the mismatch between demand and supply is pushing prices up. With the LME stockpile falling to its lowest level, the tighening supply is quite visible from the chart given below. 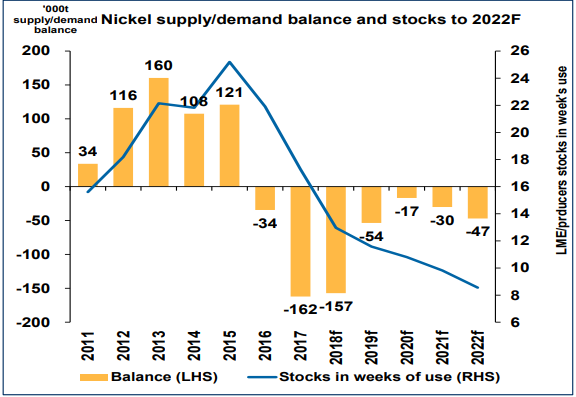 Here, we are discussing few australian companies which are enaged with nickel production or ancilliary activities and have recently come up with their quarterly udpates related to production and sales numbers.

Western Areas Limited (ASX: WSA) is engaged in mining, processing and sale of nickel sulphide concentrate. The company recently released the June 2019 quarterly numbers and updates wherein WSA met all the production and cost guidance metrics for FY19 and generated strong free cash flows. Mine production for the company stood at 5,423 nickel tonnes for the quarter ended June 2019 and 23,208 nickel tonnes for FY2019. Mill production of nickel came in at 5,433 tonnes for June ended quarter and 21,675 tonnes for FY2019. The quarter saw the highest sales of nickel at 5,890 tonnes with FY19 annual sales at 21,483 tonnes. During the quarter, the company completed the early works of Odysseus project within the given time and budget, underpinning the development of WSAâs next long-life nickel sulphide operation. 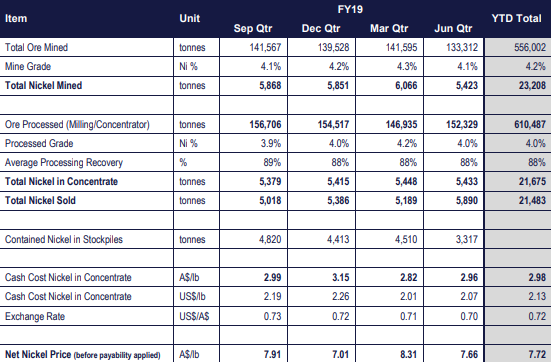 In the beginning of fourth quarter 2019, the company had released a Downstream Nickel Sulphate study update, which expressed the intention of the Management to unlock more value from existing nickel sulphide concentrate production and position IGO as part of the evolving energy storage supply chain.

Looking at the other quarterly updates, the company with the collaboration of AGAA (AngloGold Ashanti Australia), began the development of the Boston Shaker Underground development at Tropicana. Firing of the first blast for the portal at Boston Shaker happened on 08 May 2019.

For the quarter, IGO posted total revenue and other income of A$204.1 million with generating underlying EBITDA of ~A$93.6 million and a margin of 46% for the Group. Revenue from Tropicana posted a growth of 15% to A$75.9 million in the quarter which was led by higher production, primarily driven by higher milled grade and an improvement in recovery and a stronger gold price. Revenue for Nova, in the quarter, came in at $121.9 million as compared to $165.8 million during 3Q of FY19, resulting from the lower metal tonnes sold. Underlying free cash flow for the quarter stood at A$77 million whereas net cash inflow (including $16.1 million of deferred sale proceeds from the sale of the Jaguar Operation), came in at $91 million. For full year of FY19, IGO produced underlying free cash flow of A$277.6 million which included Exploration and Growth of $57.6 million and Corporate and Other costs of $15.2 million.

St George Mining Limited (ASX: SGQ) is an emerging nickel company with one of the most significant nickel sulphide discoveries in recent times. The company recently updated high-grade nickel-copper sulphide drilling at Mt Alexander. SGQ informed about multiple intersections of nickel-copper sulphide mineralisation where in it mentioned about the completion of four drill holes. The company also informed about the important extensions to known zones of high grade mineralization.

As per the quarterly activity for June ended 2019, the company completed RC (reverse circulation) program at Mt Alexander. The quarter also saw various intersections of high grade nickel copper sulphides at shallow depths. The company arranged 42 new EM conductors on priority basis which are planned to be drilled in Q3FY19. The company identified strong nickel-copper in soils anomaly at the Fish Hook Prospect which is a part of the underexplored ~8,000m eastern extension of the Cathedrals Belt. 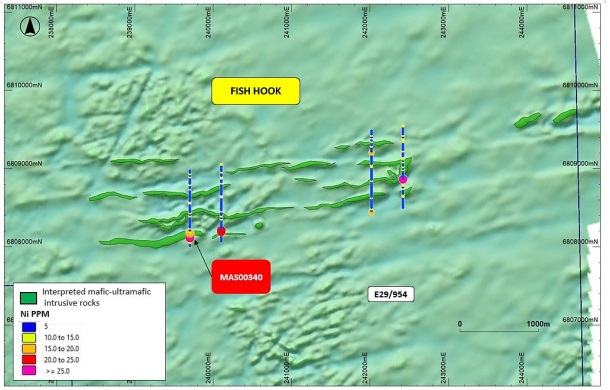