How Is The Needle Moving On These Three Energy Stocks – LCK, WEL, STX?

The energy sector is one of the rapidly growing sectors; the demand for energy is high in the international market as the economic activities thrive in the global economy. The high demand for energy requires different energy resources, which can be broadly classified into renewable and non-renewable resources. The renewable sources are marking a rapid expansion in the global market; however, the scalability issues coupled with less market penetration is still supporting the trend of non-renewable energy resources such as Coal, Crude Oil, etc.

The non-renewable energy still captures a large portion of energy pie in the market, and the producers and explorers of these energy resources are positioning themselves to take advantage of high resources and commodity prices in the international market.

The company’s National Electricity Market (NEM) acts as a wholesale market for supplying electricity to the end consumers such as retailers and other large customers in South Australia Queensland, New South Wales, Victoria and Tasmania. The flagship program of the company is the Leigh Creek Energy Project, which sits within the currently dis-used Leigh Creek Coalfield. The company intend to produce energy from the resource that is no longer economically viable to mine process through in-situ gasification (ISG), which converts solid coal into its gaseous form.

As per the company, the Leigh Creek Energy Project hosts different commercial opportunities such as electricity, synthetic natural gas, methanol, liquid fuels, ammonia and it's derivative, that would fulfil the fertilizer product line of the company. The company recently secured PRMS 2P certification for the project.

Winchester Energy Limited (ASX: WEL) is an oil and gas explorer and developer hold project in the Eastern Shelf of the Permian Basin, Texas, USA, where the company operates various oil and gas leases and working interest.

The operating leases offer the company several prospective unconventional oil opportunities and conventional oil targets in Wolfcamp shales at shallow depth and Ellenburger Formation respectively. As per the company, the presence of several known oil and gas producing horizons in the company’s tenement demonstrates tremendous opportunity and upside for Winchester. The company recently increased the targeted drilling in Mustang Prospect and provided an update on the prospect.

The leases of the company are as: 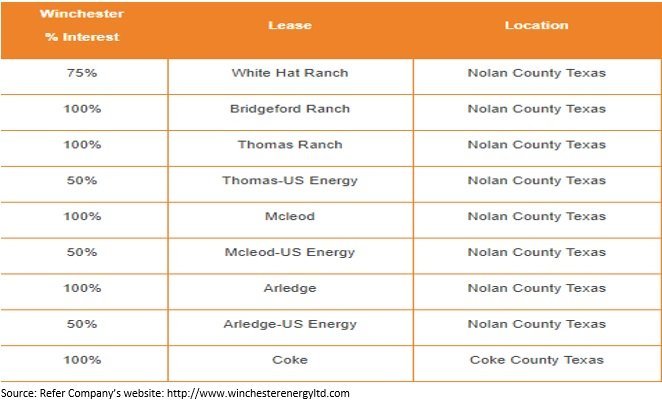 The share price of the company closed at A$0.029 (as on 26th April), unchanged as compared to its previous close.

Strike Energy Limited (ASX: STX), an oil and gas explorer, operates in Cooper Basin and Perth Basin. As per the company, its various permits such as PEL94, PEL95, PEL96 and PELA640 in the Cooper Basin are large gas resources.

The Cooper Basin is among Australia’s most prolific hydrocarbon regions, that could provide the company with an advantage in terms of quality production of oil and gas. The permits of the company in the region are as: 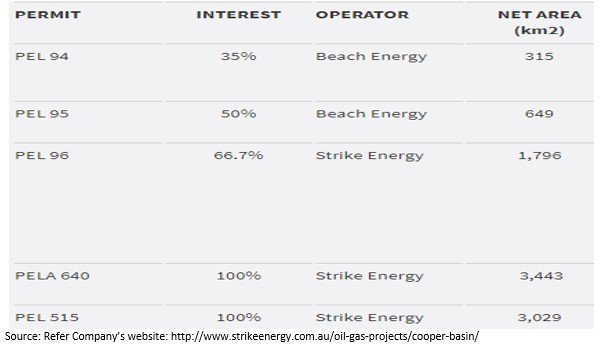 Apart from the Cooper Basin, the company operates in the Perth Basin as well, through a farm-in signed by the company in 2018, which makes the company eligible for 50% interest in the permit EP469 ( West Erregulla).