Report released by a company in every three months highlighting its activities during the period, financial position and upcoming plans along with other key details is termed as quarterly report.

In this article, we would be discussing four stocks that have recently released their quarterly reports.

Wingara AG Limited (ASX: WNR), which is a developer as well as operator of key infrastructure assets in the food supply chain, released its quarterly results for the period ended 30 June 2019 on 30 July 2019. WNR owns as well as operates value-add, mid-stream assets for the processing, storage and marketing of premium agriculture produce for exporting through JC Tanloden (JCT) and Austco Polar Cold Storage (APCS).

During the reported quarter, the company registered strong growth in customer receipts. In Q1 FY2019, receipts from customers increased by 21% to $ 7.63 million as compared to the previous corresponding period. At the Epsom production site, JCT started upgrades. On the other hand, APCS completed stage 1 of the energy efficiency program.

Magnetite producer, Grange Resources Limited (ASX: GRR), on 29 July 2019, released its quarterly report for the period ended 30 June 2019. As highlighted in the past, the second quarter remained challenging for the company with low production, followed by low product sales. The operations team had commenced opportune maintenance work on time and focused on the reduction on the west wall, which would offer the subsequent area of access to the Main Ore Zone in the near-term.

The underground feasibility study is progressing well, while the Exploration Decline development is also being carried out as per the plan, according to the market update. 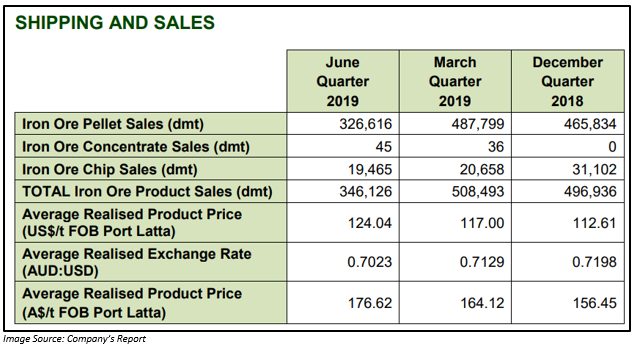 On 30 July 2019, the company made an announcement, under which it provided a production update on the Savage River magnetite iron ore mine in Tasmania. The company was successful in establishing access to the Main Ore Zone from the west wall of North Pit and started the mining process of high-grade ore. It would lead to full production rates, expected to run for 2H 2019. The Exploration Decline is continuing as per the plan and is expected to complete by the end of 2019. The prefeasibility study for the underground project is under progress. 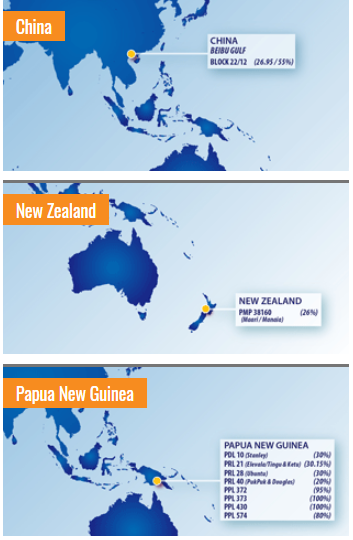 The company made a repayment of the senior debt facility worth US$ 35.2 million during the June 2019 quarter. The position of the company’s net debt as at 30 June 2019 was US$ 28 million, which represented a 68% fall from 30 June 2018. Horizon Oil also finalised recovery of outstanding insurance claims related to repair works at Maari. Its cash position as at 30 June 2019 stood at US$ 21.5 million.

The annual sales of 1.87 million barrels for FY2019 was up by 13% when compared with the same period a year ago. The average realised oil price was US$ 67.90/bbl, which was exclusive of hedge settlements. In the June 2019 quarter, there were sales of total 432,493 bbls at an average realised oil price of US$ 73.41/bbl, which was inclusive of hedge settlements. The production of 1.6 million barrels during FY2019 represented a 22% increase in the production from FY2018. The June quarterly production was up by 3.1% to 407,453 bbls. The operating cost of the company during the June 2019 quarter was below US$ 20/bbl.

The company during the period, continued with its fast-track development strategy at its flagship project, Rincon and was able to attain a substantial milestones which include the beginning of the lithium carbonate (Li2CO3) production operations from the industrial scale pilot plant, in order to supply high-value product into executed Sales Agreement. With this, the company was able to join the exclusive list of international lithium carbonate producers.

With the chemical process being tested, it was proven that AGY could produce Li2CO3 product with more than 99.5% grade. The company, at present is working proactively to evaluate and contemplating new projects under the lithium sector, where it could use its experience as well as its expertise. For this purpose, AGY is currently going through the evaluation process and is amid the process of related discussions.

Other than this, the company is awaiting approvals on the progress of approximately 2,000tpa commercial operation module Li2CO3 processing plant as well as related operational works at its Rincon project. Also, the company is in the process of preparing applications for the approval of full-scale 10,000tpa operation project development.

The company also conducted the processing work related to the high purity lithium hydroxide (LiOH) at the pilot plant, as well as an internal laboratory for the sample testing. Based on the laboratory analysis, it was found that 56.84% LiOH content value has 99.61% purity of lithium hydroxide monohydrate.