Lithium chemicals are trending down in the international market; however, the projections of high demand in the coming years is prompting miners to continue the exploration and development of lithium chemicals.

The demand for lithium chemicals is projected by many industry experts to increase in the coming years amid the predicted battery boom in the energy storage sector; however, the demand of lithium-based chemicals such as lithium hydroxide is currently showing slower growth than previously projected by the market participants.

Australia is now the most significant contributor in the global lithium supply chain, which accounts for its abundant lithium reserves and high engagement of lithium explorers, who are engaging themselves in not just the primary lithium production but in the lithium downstream processing as well.

The lithium market is currently oversupplied, and the recent stance of Chile to inch up the production could add more to the supply chain; however, the industry experts predict that the lithium consumption in the coming years would surpass the supply chain.

AGY is an ASX listed mineral explorer which is having operations in many geographical areas, such as Argentina, Tasmania, Queensland, etc. The project portfolio of the company in Argentina includes its Rincon, Mina Teresa and Pocitos projects, which are all lithium based projects. AGY holds the Mt Paris Lithium Project in Tasmania; while its Queensland based Wee MacGregor Project is a Copper, gold and cobalt project.

AGY also hosts a graphite project in Namibia - Erongo Graphite Project. The Rincon Project of the company is the key asset, and the project is in Salta Province of Solar del Rincon.

In an announcement made public by the company recently, AGY mentioned that the company commenced the production of lithium carbonate from its industrial-scale pilot plant, which is the part of the Rincon Lithium Project.

The company executed sales agreement in March 2019 and now decided to produce and store the lithium carbonate until the product gets ready for the shipment.

AGY intends to reach the 2,000 tonnes per annum modular operations, which is the next milestone to achieve in the development of the project. The company is currently expecting regulatory approvals for the current stage of the work, and in the meantime, the executives of AGY would attend strategic meetings in Japan. The purpose of those meetings would be to produce the lithium carbonate (99.5 per cent) off-take agreements.

LPD or famously known as Platypus Minerals Limited is an Australian Securities Exchange listed lithium explorer, who apart from mineral exploration and development, is engaged in the licensing of its proprietary L-MaxÂ® Technology that extracts lithium and recovers valuable by-products from less contested lithium-mica and phosphate minerals. The business of the company is spread among various geographical areas such as Australia, Peru, Canada, etc.

The exploration assets of the company include the Lemare and the Royal projects in Canada, and Euriowie Project in New South Wales, which consists of over 50km2 of tenements. LPD is famously known for its cost-effective technology to produce lithium chemicals from the lithium mica resources such as lepidolite and zinnwaldite. The companyâs L-MaxÂ® and Li-OHÂ® leach the lithium micas to produce lithium carbonate and lithium hydroxide, respectively.

In an announcement made public by the company recently, LPD mentioned that the companyâs merger partner- Desert Lion Energy Inc received the approval for a statutory plan of Arrangement under the Business Corporations Act from the Ontario Superior Court. The final approval from the court would now allow LPD to acquire all of the outstanding common shares of Desert Lion through its wholly owned subsidiary.

ADV is an Australian mineral explorer listed on the Australian Securities Exchange, engaged in mineral exploration and resource evaluation. The footprints of the company are mainly in Canada and Australia, and the business portfolio of the company includes Manitouwadge, Hinton North, Seymour Lake, and Root Lake in Canada. The Seymour Lake and Root Lake are lithium-based projects, while Yinchen Project is a Tin-based project in Belitung, Indonesia.

In a recent announcement made public by the company, ADV mentioned that the company would assume 100 per cent ownership of a Joint venture, Pickle Lake Gold Project in Ontario, Canada.

By providing exposure to multi-commodity such as gold, the company is likely to diversify the non-systematic risk or Unsystematic risk. The decision of the company to acquire the 51 per cent stake of Murchison Minerals Limited in Pickle Lake Gold Project would serve as the value add for the companyâs investors in the short-term. 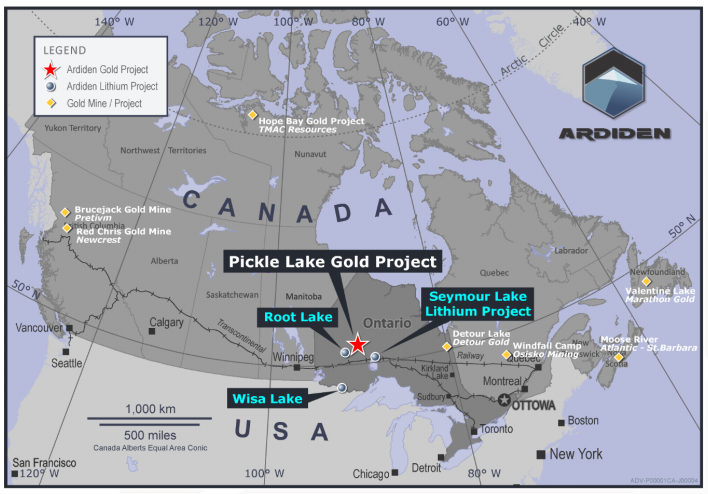 ADV notified Murchison that post the fulfilment of all Option conditions and due diligence of the drilling along with the robust review of the project; the company exercised its Option to acquire the 51 per cent stake of Murchison in exchange of a 1 per cent Net Smelter Royalty from any future gold production.

In the interview with the Boardroom media, the Non-Executive Director of the company, Ms Pauline Gately mentioned that the company is bullish on lithium over the long-term and long-term trajectory of lithium would see the prices again rising in the international market.

Ms Pauline explained the current lithium scenario as a burst bubble and said that post the bubble burst the market gets more normalizsd and behaves on the rationale of demand and supply of the commodity.

The duo concluded that interview by explaining the strategy to keep the lithium exposure for the long-term and diversifying the risk over the short-term.

In an announcement made public by the company recently, AJM mentioned that Ningbo Shanshan Co. Ltd became a substantial shareholder of the company, and acquired 11.8 per cent interest from the former shareholder Shaanxi J&R Optimum Energy Co. Ltd.

On 5th July, the shares of the company were placed on a trading halt amid pending announcement from AJM regarding changes to the companyâs existing offtake arrangements. The normal trading of the shares is expected to start on 9th July 2019 post the announcement.