The sharp rise in prices is due largely on back of the following global macro events: -

Apart from central banks, there exist more diverse demand for gold across consumers and investors such as Technology demand, Jewellery demand and investment demands. In the milieu of which it is quintessential to analyze this impact on gold prices as shown below: -

Technology demand is very negligible to have any impact on gold prices. Also, on the contrary, the price of gold can affect technology demand, as it is price-taker and not price setter.

Gold Investment is done in two ways, either via Physical Investment, i.e. directly holding the gold coin and bar and Exchange Traded Fund (ETF), i.e. indirectly holding funds backed by gold. In this fund manager or custodian invest in hard gold assets. The demand for ETF is more than the physical investment because of calculative risk and easiness to liquidate than the physical gold.

Also, the increase in the price of gold has dwindled the demand of gold in Q3’2019 but compensated by the surge in ETF inflows in the same quarter. Jewellery demand was hampered by 16% seeing the expected fall in price after economic recovery. Similarly, the decline in bar and coin was 50% followed by a 4% drop in technology. This fall in demand was compensated by ETF inflows of 258t in Q3’2019.

The gold supply has reached the highest level of the past two years in the past quarter. The high gold prices have motivated the miners to supply more to the continuously increasing demand.

Recycled Gold: With the highest growth of 10.3% observed in the recycled gold in Q3,2019 and saw the highest level since Q1, 2016. The recycled gold volume increased to 353.7 tonnes. The gold price rally has encouraged the consumers to sell back their holdings for profits resulting in increased supply even though the mine production is quite stagnant. With US-China Trade war likely to extend till the 2020 US presidential elections, the price rally is set to continue till for the upcoming year. This would result in even increased gold supply from the recycled portion.

Mine Production: The mine production decreased by 0.6% to 877.8 tonnes in Q3,2019 as compared to previous corresponding period. The revamping of large-scale mines such as Cadia valley, Natalaka have increased production, but falling head grades and emergency shutdowns in other operations such as Boddington, Superpit and Syama underground have offset the impacts. The output from China continued to decline, mostly due to environmental reforms which were introduced in 2017. Grasberg, which is transitioning from open pit to underground operations, dragged down the production of Indonesia. The gold mining industry has been experiencing a consolidation phase with Barrick-Randgold and Newmont-Goldcorp mergers, two of the biggest companies in the sector. The increase in gold prices has pumped up new energy among miners to invest in new projects such as Mcphillarnys gold mine.

Gold prices reached a six-year high of US $1,547 on 3 September 2019. With the glut in iron ore and coal supply, gold’s will continue to provide a haven to its investors. The demand from Jewellery, mainly dominated by China and India, would be closely watched as the prices are currently unattractive. 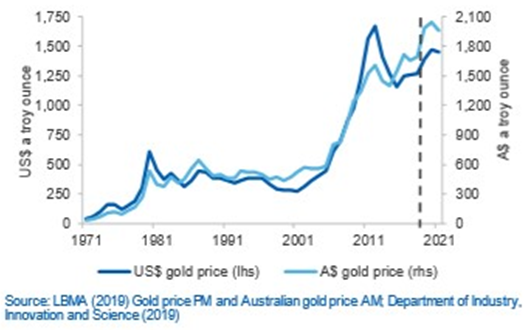 The surging demand from central banks is likely to continue as long as gold continues to provide security against price drops and fluctuations in the commodity, geopolitical issues and trade war. The gold price would increase further due to trade tensions, rising geopolitical conditions and the volatility in the bulk commodity markets.

The gold prices are currently in a correction phase and the battle between the bulls and bears is unfolding. On the fundamental front, the uncertainty over the US-China trade war is largely looming unsettled and the upcoming global elections are adding more uncertainty. The prices have reached year highs, making it unattractive for the jewellery demand, on the other side the unabating quantitative easing by the central banks is adding more liquidity to the gold demand.