2018 marked strengthening of economy that was creating opportunities to reorient policy towards the longer-term pursuit of sustainable development, after a long period of stagnation. While 2019 depicts contradiction, given that disrupting forces have been sweeping the global economy. Sensitive to micro and macro-economic forces, trade flows are adversely impacted by the protracted trade wars. Automation and digital disruption are boosting productivity for a few economies, while eroding sources of advantages for others. The constant threat of climate change looms volatile than ever, along with geopolitical pressures and the prospect of a sharper-than-projected global slowdown.

Currently, global trade is decaying and dragging down economic activity in nearly every major economy. According to the latest release by The Organisation for Economic Co-operation and Development (OECD) in November 2019, the weak trade and investment and persistent political uncertainty are weighing on the world economy, threatening long-term growth in the current time. In 2019, the World GDP growth is expected to be 2.9%, the lowest annual rate since the Great Financial Crisis of 2008. In 2018, the Global GDP had expanded by 3.5% in 2018.

What’s triggering and rather thought-provoking is the fact that this GDP growth is likely to remain subdued at 2.9% to 3.0% in 2020 and 2021. The slowdown has taken both advanced and emerging-market economies into its radar, though the gravity depends on the importance of trade in different countries. In the current global economy: 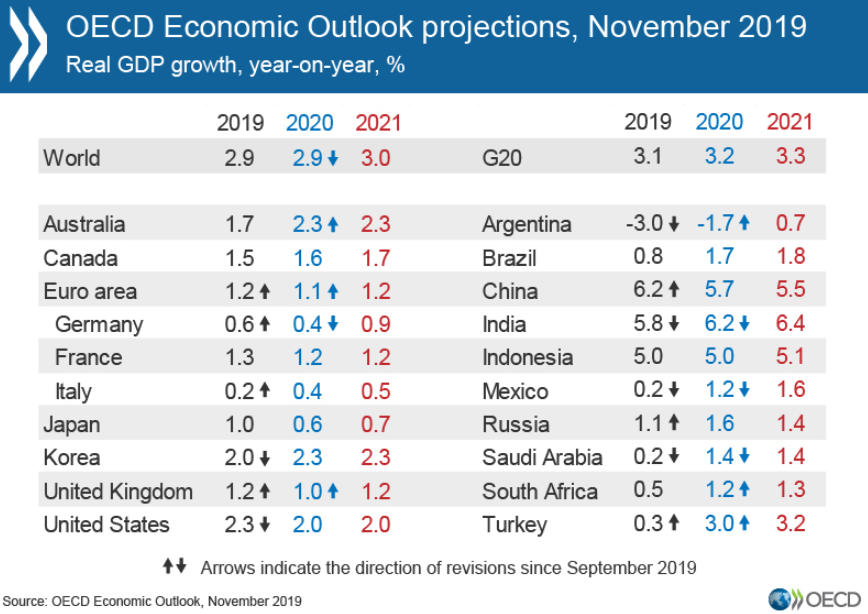 Given the current turmoiled economic stance hovering over the world, economies are in dire need of co-ordinated political action to restore confidence, boost inclusive growth and raise living standards. However, there is a pervasive agreement among economy experts that by 2030, the world will be older and wealthier with reduced differences in GDP/capita throughout nations. An inclusive and dynamic global economy is integral to providing the aspiring targets of 2030.

Let us graze through the global economic outlook of the years to come:

The Fed Rates Cuts Amid A Slow Economy

The Federal Reserve is the central bank of the US, and aims to give a secure, flexible and steady monetary and fiscal system. To attain its ultimate objective, the Bank has been making headlines through 2019, driven by its rate cuts, to boost the US economy, which is currently vulnerable to recession, exposed to trade war with China and a global slowdown, which threatens to drag the U.S. economy down.

But why must the Fed keep cutting interest rates? Let us find out-

High corporate debts and faltering profits are a bane to every economy. The US, one of the world’s powerhouses is currently stuck between a booming economy amid whispers of a financial crisis around the corner. The main reason for cutting rates as much as thrice in a mere four-month span suggests that the Fed intends to aid the corporate sector, which is dangerously over-indebted, creating a financial bubble.

Secondly, the ongoing trade conflict with China and thirdly, a global economic slump are reasons enough for the Bank to shun the rates, to improve the debt figures.

In its last Federal Open Market Committee meeting in October, the Fed indicated that it has no plans of a further cut except in a situation wherein it finds strong evidences that the economic outlook has deteriorated and needs to be checked upon.

This is reason enough for marker experts to believe that given the current sustained downturn in inflation and macro and micro economic factors causing the US (and global) economy to slow, could make the Fed announce more rate cuts in or around the first half of 2020, or as soon as in its next meeting in December.

Experts close to the Government indicate that even Mr Trump wishes for more aggressive rate cuts to aid the economy and help it’s not-so-likeable outlook. This is compared to economies like Australia, Japan and the EU, where Central Banks have been slashing rate cuts to boost their respective economies.

CLICK HERE FOR YOUR FREE REPORT!
Tags:
Global Economy by 2030