Australia and US Agree to Develop Critical Mineral Assets- Beginning of New Partnership Amid Trade War?

The ongoing uncertainty in the relationship of two of the most powerful economies of the world, the USA and China, amid bleaker prospects of the future of the world’s economic growth has spurred nervousness in countries, businesses and investors alike. However, markets have continued to appreciate in value, as investors have noticeably favoured companies that seem immune from these macro level economic turmoil.

The dynamic nature of the functionality of economies continue to surprise the world each morning and official agreements between countries amid this volatility steals the show.

In this article, we would concentrate on a recently formed partnership between Australia’s Geoscience Australia and US’ United States Geological Survey. Let’s dive right in!

The US-Australia Partnership on Critical Minerals

To the delight of many, Australia’s Geoscience Australia and the US’ United States Geological Survey (USGS) have inked a project Agreement to enhance one another’s supply and understanding of critical minerals. 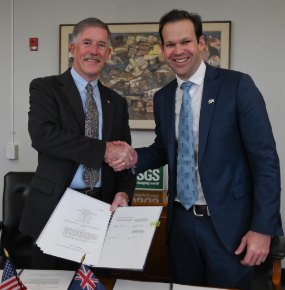 Of course, it is! The newly formed collaboration between the world’s strongest economy and one of the strongest economies depicts that economic relations between the US and Australia are noticeably stronger. Let’s understand the Agreement, before discussing it further:

What Will Be the Outcome of the Critical Minerals Agreement?

Senator the Hon Matt Canavan, Minister for Resources and Northern Australia stated that the critical minerals Agreement would enhance the US’ and Australia’s understanding of their geological resource potential for critical minerals (incl. rare earth elements) and contribute to a robust evidence base for global supply potential. It would help the nations to better identify and close critical minerals knowledge gaps, wherever existent.

Australia would reap the benefit to understand future trends and match its resource potential to international demand. The innovation in the critical minerals sector, which is gaining traction, would pace.

Now that we understand the Agreement and benefits that it is likely to bring in the coming months, it is important to gauge over the main element of the Agreement- Critical minerals. Critical minerals are a necessity for the manufacture of defence tools, high-tech, aerospace, agricultural, automotive, renewable energy and telecommunications technologies. In the current time, critical minerals are found in routine items such as lithium-ion batteries which supplies power to laptops and smartphones.

Rare earths, specifically, are the clean energy future, and are driving several emerging clean energy technologies that focus on greenhouse gas emissions reduction and dependence on fossil fuels. They are used in rechargeable batteries, make the world’s strongest permanent magnets for wind power, hybrid and electric vehicles, and are used as phosphors in flat screen display panels and smart phones as well. They are integral in improving energy efficiency and increasing renewable power generation capacity and have a very strong macro outlook.

Production of rare earths is projected to increase at ~5% per annum over the next five years and would reach 222 thousand tonnes in 2023.

Australia is home to world-class deposits of critical minerals and rare earth that represents a substantial commercial opportunity, and there is an attractive job creation potential in regional Australia. The Department of Industry, The Australian Government and Export Finance Australia aim to develop these lucrative elements, so that the Aussie companies are able to leverage their access to the available and proposed government support to accelerate critical mineral and new rare earth processing activities in the country.

Tech-driven industries would also benefit from critical minerals, which will in turn open up new opportunities in trade and manufacturing, creating jobs of the future for several Australians.

A great initiative is the Critical Minerals Facilitation Office, which is due to open on 1 January 2020, and help interested parties to secure investment, financing and market access for critical mineral projects, as well as promote global cooperation to diversify supply chains.

On the investing end too, it should be noted that the Australian Securities Exchange (the ASX) has a hoard of metals and mineral players who are gaining investor traction with their progresses with rare earths, like Greenland Minerals Limited (ASX: GGG), Lynas Corporation Limited (ASX: LYC) and Krakatoa Resources Limited (ASX: KTA).

What Does The Government Say?

Pleased and Proud Minister for Resources and Northern Australia, Mr Canavan was in dialogue with US Commerce Secretary, Wilbur Ross and other officials in Washington DC to deepen the Agreement ties. He said that the bilateral cooperation on critical minerals with the US will offer opportunities for new projects to get off the ground.

It will allow scope for Australian miners, who are well placed to grasp opportunities, to enter secure and stable supply chains to meet the growing demand in major economies such as the US.

Another follow-up meeting pertaining to the Agreement has been scheduled for February 2020.

What About China’s Dominance in Rare Earths?

China is the rare earths powerhouse currently, producing (primary production and mining) almost 77% of the world’s total. It is also the largest user of rare earths, accounting for 69% of world end-use consumption. Australia follows suit with 12% share and is the second largest producer with 3% of the rare earths’ resources of the world. North America stands at #3, with 7% share. The US is heavily dependent on imports (17%) of processed rare earths and has a small domestic mine capacity.

The Agreement signed between Australia and the US is perceived as a strategy to weaken China’s hold on rare earths, where consumption is expected to continue growing in-line with manufacturing activity. However, it should be noted that low prices and production quotas in China have curbed rare earths production growth.

In mid-2019, China imposed a 25% tariff on rare earth imports from the US, which consequently made the US produced rare earth oxides expensive when they were imported for processing in China.

The outlook for rare earths depends on whether there are further tariffs applied or export controls introduced.