Subscription video-on-demand (SVOD), which is a subscription-based business model, is a popular way of watching video content. This service enables users to get access to a variety of video on demand content, which they can view at any time by making a flat fee on a monthly basis.

This is quite evident from the recently announced âthe new Foxtel experienceâ by Foxtel, Australia-based media company, which is struggling with growing its user base as well as retaining them in recent years. The Australian pay TV company confirmed a partnership with US-based streaming service, Netflix during a press conference in Sydney, in addition to the announcement of a range of changes to improve its customer experience.

Foxtel is a provider of diverse subscription-based TV services, catering to regional as well as metropolitan areas. The company also operates the only dedicated, live, 4K broadcast channel of Australia. It gives its clients a premium, streamed and live experience to entertainment, movies, news and sports. Its services are streamed over broadband and broadcast via satellite distribution system.

While, Netflix is a California-based company, engaged in providing subscription based streaming over-the-counter service, with a global paid subscriber base of more than 150 million as of July 2019. The company was founded by Reed Hastings and Marc Randolph during 1997.

What is in store for Foxtel users?

Under the new experience, the company intends to offer access to more on-demand content, as well as a new, simplified user interface, which is scheduled for launch in the coming months. Additionally, the partnership announced on 24 July 2019 would enable the customers of Foxtel to get a direct access to the popular TV shows and movies streaming on Netflix, as a new Netflix button has been added to their remote control. The current Foxtel subscribers will get access to Netflix for free for a six-month period; however, in order to avail this service, they are required to re-contract before the month of September 2019. Meanwhile, new subscribers of Foxtel with a package worth $ 58 for sports, drama and entertainment services can get Netflix added to their account for free for six months.

The changes on the IQ4 set-top box were scheduled to come into force on 24 July 2019. Moreover, the users of IQ3 set-top boxes will get access to new services within the coming few months. After the free period, the subscribers would have to make full payment to access Netflix, which offers its monthly services in Australia at $ 9.99 for a basic package and $ 17.99 for a premium package, while its standard service starts at $ 13.99 per month in the Australian market.

The deal is a win-win for both the companies, as Foxtel will get to keep its loyal subscribers by keeping them more engaged, while Netflix will get to acquire more customers through Foxtel. The deal highlights how Foxtel is looking to retain its subscribers by cashing in on the pure dominance of Netflix, the most favourite streaming app among Australians.

Though Netflix dominates the Australian market in subscription services, it reported a loss of around 130,000 subscribers in the US market during the second quarter of 2019, which is also the first fall in its US subscriber base since 2011. The fall was attributed to the increase in price for its subscription services, at a time of intensifying competition.

The figure below highlights the streaming serviceâs financials (Figures in USD): 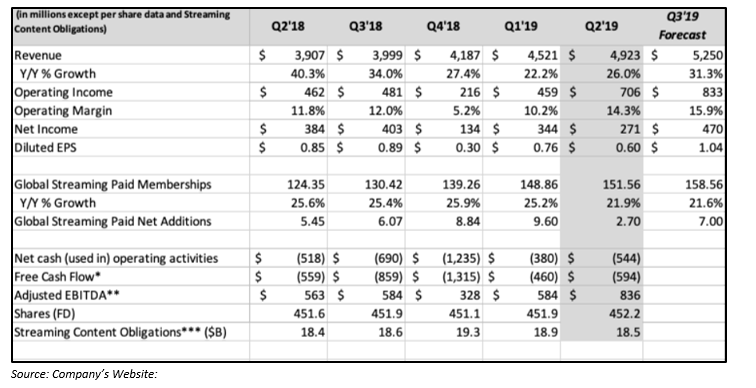 Majority of Foxtel is owned by News Corporation (ASX: NWS), which is a diversified media and information services company. NWS owns a 65 per cent stake in Foxtel, while Australiaâs leading telecom company Telstra Corporation Limited (ASX: TLS) owns the remaining 35 per cent.

NWS released financial information related to Foxtel in the month of May 2019, according to which the latterâs revenue from subscription decreased to $ 1.35 billion in the first half of the financial year 2019 ended December 2019 from $ 1.47 billion (unaudited pro forma condensed combined financial data) registered in the same period a year ago. Revenue from subscription primarily represents subscription revenue from retail broadcast, Foxtel Now and OTT services, in addition to revenue from commercial customers, pay-per-view purchases, broadband, among others. During the first half of FY19, Foxtel registered $ 7 million in profit after income tax expense, compared with $ 120 million in the year-ago period.

News Corporation and its subsidiary NXE Australia Pty Limited (new Foxtel) are in talks with certain potential lenders to secure funds to refinance the existing debt of new Foxtel, which was formed after the combination of Fox Sports Australia Pty Limited and Foxtel Group. New Foxtel started consolidating Foxtel in April 2019.