A flick through iflix, an Asian version of Netflix

Australia's one of the most successful entrepreneurs, in south-east Asia, Patrick Grove is trying to obtain an Australian Securities Exchange (ASX) listing for his streaming business service ‘iflix’, an Asia-focused TV shows and movies streaming platform, as soon as this year. iflix is an Asian version of media-services provider, Netflix, that was established to reach one billion customers within a decade.

Mr Patrick Grove is the co-founder and the current chairman of iflix. He stands at 105th position in Financial Review Rich List having a net worth of $885 million. Mr Grove had already established and listed online classified companies on the ASX over the previous decade including iCar Asia (ASX: ICQ), iProperty Group, and iBuy Group. The iProperty Group was sold to REA Group (ASX:REA) in 2016 for $751 million.

Headquartered in Los Gatos, California, Netflix has changed the way we watch TV. As per the official estimates, more than half of American households subscribe to a streaming service, and almost 35 million households have quit cable in the past decade. People are moving to streaming services like Netflix, and the billions are adding to stock market wealth with the downfall of cable.

Below are some of the content partners for iflix: 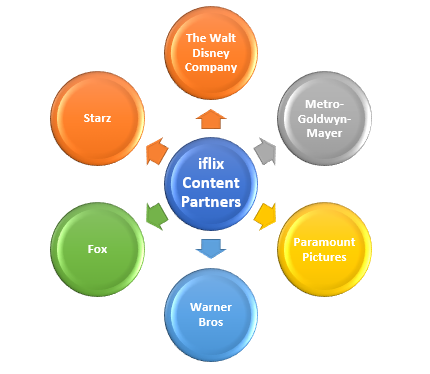 iflix offers subscription video on demand in the same way Stan or Netflix does in Australia. The company defines itself as the world's leading entertainment service for developing markets. iflix targets consumers in Malaysia, Thailand, the Philippines, Indonesia, Saudi Arabia and Sri Lanka, among other countries.

Mr Grove does not see Netflix as a competitor as he describes iflix as hyper-local in price, language, content and distribution. He compares iflix’s typical price with the price of a pirated DVD.

The current Chief Executive Officer of iflix, Mr Mark Britt, opined that HBO, Netflix and Disney are products built for wealthy people who are quite sophisticated around payment mechanisms and for Apple owners. He further informed that iflix had delivered a 300 per cent growth in the last 12 months.

iflix has more than $400 million in backing from media giants like Hearst Group (United States), Sky TV (United Kingdom), and MNC. Recently, iflix entered into an agreement with Indonesia’s largest integrated media company, PT Media Nusantara Citra (MNC) under which there was an inclusion of up to 10,000 hours of MNC content in the iflix platform.

In 2017, iflix announced a 133 million US dollars capital raising led by a US-based television station owner and publisher ‘Hearst’, valuing iflix at more than $700 million. If iflix get listed on the ASX, it will be Mr Grove’s fifth Initial public offering (IPO) on the ASX. The listing could value the company at more than $1 billion.

Imitating Netflix, Mr Grove is planning to devote 50 per cent of iflix’s content budget on original productions. He believes that he is taking matters up a notch.

At the beginning of this month, iflix also partnered with a kid animation content creator and distributor, One Take Media Co (OTMC) to launch OTMC’s premium kids animated movies and series on iflix platform.