Global Entertainment- Would Netflix Recover From Its Historic Nose-Dive?

Since time immemorial, cinema has been the primary source of entertainment, recreation and creative content. It is regarded as a communal factor that binds different cultures of the world and contribute towards creating a colossal global family that has the same interest in motion pictures. The times we live in is often referred to as âThe Golden Age of Storiesâ, and stories are immortal, challenging oneâs assumption and inspiring their audiences in multiple ways. 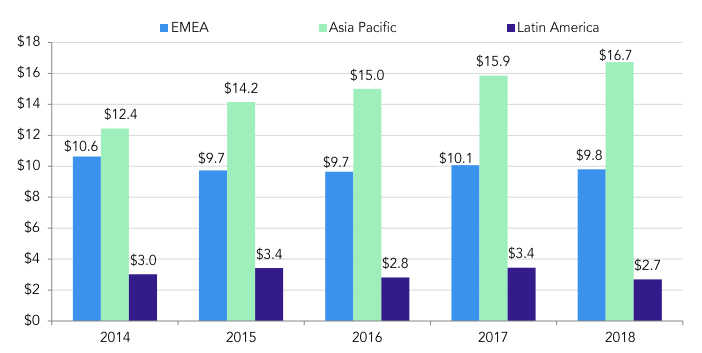 Cinema received an all-together different identity with the addition of media services in the late 1990âs. Names like Netflix, Amazon, Blockbuster Video, Redbox, Hulu Plus and CuriosityStream became every householdâs go-to entertainment source. The phase where one had to visit a theatre to watch a movie was long gone, with an ocean of options right at home on their television and laptop screens.

According to the Theatrical and Home Entertainment Market Environment (THEME) report created by the Motion Picture Association of America (MPAA), 2018 reported a combined home entertainment and theatre market worth of $96.8 billion, up by 9 per cent from its prior corresponding period and 25 per cent from the past five years. The US/Canada box office hit a record high of $11.9 billion, with the total global box office topping $41 billion. There were more cinema screens across the globe, reaching up to 190,000, a rise of 7 per cent.

The most interesting figures were reported at the end of the home entertainment segment, with the user spending witnessing a lift of 16 per cent at $55.7 billion. It was estimated that over 70 per cent adults in the US watched movies and television shows through an online subscription channel. Across the globe, there were approximately 613 million subscriptions to online video subscriptions, up by a significant 27 per cent when compared to 2017.

Worldwide, the digital spending soared up by 34 per cent on a relative comparison to 2017, with 24 per cent in the US alone. Thus, it is safe to state that digital spending was the driving factor for the growth of the global home entertainment market. Since 2014, there has been a positive uplift of the digital media space, with the global digital spending up by a whopping 170 per cent. It should be noted here, that while the figures remain to be on a rising graph, the physical spending had been shunned by 48 per cent since 2014, proving that digital viewing is the preferred choice of consumers, and is here to stay.

For the first time in history, in 2018, the subscriptions to online video services took over the traditional cable subscriptions, with the latterâs $556 million witnessing a dip of 2 per cent. However, cable subscriptions are not a thing of the past yet, as even with the decrease in overall subscriptions, they remain the highest revenue generating video platform and have witnessed an increment of approximately $6.2 billion to $118 billion, last year.

Players in the Home Entertainment Market:

Entertainment is no different that business when it comes to dynamicity. With the changing times, trends and likings evolve; the way people consume content witnesses a shift very often. This needs to be addressed and duly adhered to in the home entertainment business as well, as consumers take this to the rescue, either for entertainment or to merely relax. It is of utmost importance for the media and entertainment sector to be up-to-date with the latest trends that are creating the buzz across societies, adopt them, build them and eventually showcase them on screens.

Interestingly, these entertainment services have gone a step ahead when it comes to justifying the old maxim âSharing is Caringâ. A majority of Amazon Prime and Netflix users share their accounts with family and friends, which increases the viewersâ bandwidth. Moreover, these home entertainment companies have started developing their own movies and originals, to grasp more viewer attention and provide users with numerous choices.

Market experts believe that the competition in the Home Entertainment space would grow, looking at Disneyâs announcement to remove its content from Netflix and launch a streaming service of its own in 2019. There would be radical change in the dynamics of advertising and mergers and acquisitions are likely to take place. The telecom sector would be directly impacted by the shifts and enhancements in the Home Entertainment Space and the rise of subscription streaming services, along with increased demand for original digital video content would push telecoms to integrate digital content into their usual offerings.

At the backdrop of this context, let us now look at, which could be referred to as the magnate of media services and entertainment providers, and a household name in the present times- Netflix, and a stirring update about the company that has been the talk of the town.

Company Profile: Based in California, Netflix, Inc., an American company was established by Reed Hastings and Marc Randolph during 1997.

With the primary goal to provide subscription based streaming over-the-counter service, as of April 2019, the company had more than 148 million paid subscribers, across the globe. The âNetflix Originalâ content is its own online library. The services of the company are available in almost all the countries, with offices in India, Brazil, Netherlands, Japan and South Korea. However, due to domestic restriction, Netflix ceases to exist in China, North Korea, Syria and Crimea. Netflixâs revenue for 2018 was approximately $15.79 billion.

In Australia, the Netflix pricing starts at $9.99 per month for basic services and $17.99 per month to avail premium services, with an in-between availability of a standard service which starts at $13.99 per month.

Tumbling down of Shares and loss of customers: Amid the rise of home entertainment media services, Netflix witnessed a gloomy trading session on 17 July 2019, when its shares price fell by a historic ~10 per cent. Piling up the problem hill was the loss of approximately 130,000 subscribers in the United States in Q219 period, for the first time since 2011. After a projection of adding almost 5 million global subscribers, the company was successful to add only 2.7 million subscribers in its kitty.

The major drivers of this downtrend are attributed to the rise in subscription prices, at a time of intensifying competition. The companyâs revenue for Q219 period stood at $4.92 billion, which was more than $3.91 billion in Q119. The Net cash used in operating activities in Q219 was $t million vs. $518 million in the pcp.

The companyâs latest revenue highlights are depicted below: 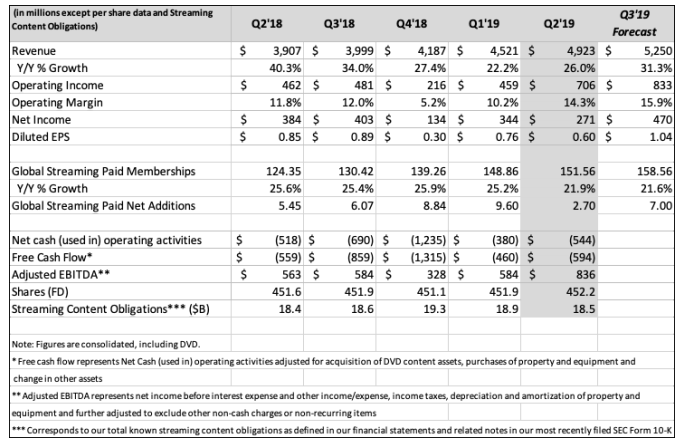 Netflixâs Outlook: During the Q3 period, the company expects to grow by 7 million paid memberships, more than 6.1 million in the pcp. With a great start to Q3 with âStranger Things 3â, the company is hopeful of a healthy quarter ahead, and its operating margin target for FY19 remains the same at 13 per cent, up by 300 basis points on a YOY basis.