Dividends are part of the entity’s earnings that are paid to the shareholders of the company. Therefore, it can be said that dividends are part of the income distributed to the shareholders out of the net income earned during the period; net income excludes expenses, taxes, depreciation, amortisation etc. from the total turnover.

At times, the companies pay extra-dividend or special dividend. Generally, this happens when a company achieves some unexpected high-income, which could be unexpected high-value order, profits from the sale of a business, cost-cutting initiatives and contingent income from petitions etc. In the recent past, Woolworths Group Limited (ASX: WOW) had a dividend component of A$24.15 in its buy-back program from the sale of its petrol business.

In this article, we would discuss two stocks with over 70% dividend pay-out ratio, as per the last full-year results:

Rural Funds Group (ASX: RFF) owns high-quality agricultural assets in Australia. The group leases out its assets to generate stable income along with value growth on those assets to generate capital growth for the investors. RFF is a stapled security, a constituent of S&P/ASX 300 & S&P/ASX Small Ordinaries etc.

The group distributes the dividend on a quarterly basis. Currently, the annual dividend yield of the stock stands at 4.44%. In the year 2018, the group had distributed an annual income of ~A$0.1 per stapled security. Currently, the group has announced cumulative dividends of ~A$0.08 per stapled security for 2019 period, and the latest dividend has been scheduled to be paid on 31 July 2019. 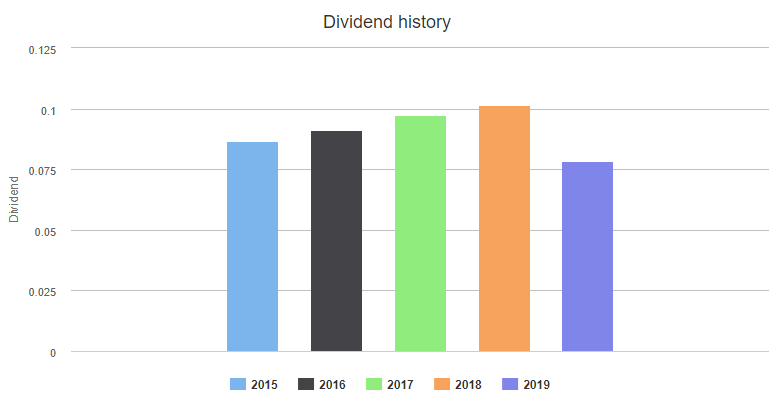 Based on the figures from the last FY close, the dividend pay-out ratio of the stock for the financial year 2017-2018 was ~71%, which depicts the capability & commitment of the company to pay the dividends. Alternatively, it means that the company has paid 71% of the diluted income in dividends.

Based on the figures from the last FY’s close, the dividend pay-out ratio of the stock for the financial year 2017-2018 was ~75%, which depicts the capability & commitment of the company to pay the dividends. Alternatively, it means that the company has paid ~75% of the diluted income in dividends. In addition, the stock of the company is also recognised in the S&P/ASX Dividend Opportunities Index that tracks best paying dividend companies.

In June 2019, the company announced the appointment of Mr Benjamin Ward as the Managing Director of Auto. Accordingly, he would be joining the executive leadership team on 29 July 2019. Also, Mr Ward had demonstrated experience in retailing, product-sourcing, merchandise and store management expertise for close to 25 years. Prior to this appointment, he was based in Germany with ALDI Supermarkets.

In April 2019, the group presented trading update for the first seventeen weeks of the second half of the 2018-19 financial year. Notably, the CEO of the group spoke about the initial focus of the group for 100 days, during his tenure since February 2019.