At a time when most companies have decided to either slash their dividend or withdraw their guidance due to the COVID-19 uncertainty, some have managed to provide a dividend to their shareholders.

The coronavirus has had a detrimental impact on Australia. As on 02 April 2020 at 6:00 AM AEDT, the government has registered 4,976 confirmed cases with 21 reported deaths.

In this article, we would be looking at those companies which have provided their shareholders with a dividend.

ASX-listed AGL Energy Limited is involved in the energy business and accounts for ~20% of the National Electricity Market’s generation capacity. The Company operates the biggest private electricity generation portfolio in the country, with the total capacity of 10,413 Mega Watts. AGL is also an active contributor in gas & electricity wholesale markets. It has 3.7 million customer accounts which comprise of housing, small & large companies as well as wholesale clients.

AGL had a decent 1H FY2020 with double-digit growth in statutory PAT and EPS. Key highlights include:

Notwithstanding the Loy Yang outage, higher depreciation costs & market headwinds, the Company anticipates its underlying profit after tax for FY2020 to be in the upper half of the guidance range of $780 million - $860 million.

On 16 March 2020, the Company provided an update to the dividend and distribution. The reason was the update related to the DRP price, which is $18.22.

Sydney Airport is a Company engaged in Airport operations on 10 March 2020 released an announcement where it reported a significant downfall in traffic performance during February 2020 because of the coronavirus outbreak.

Looking at the recent announcements by the governments (both state and federal) and the responses of competing airlines including Qantas Airways (ASX:QAN), Air New Zealand, and Virgin, the Sydney Airport is working through the precise scheduling impacts on Sydney Airport with its airline partners. The Company expects and is preparing for a considerable but temporary drop in global as well as domestic traffic.

SYD stated that the priority at this point is the health and safety of the people as well as everyone who comes to the airport daily. The Company also assured that it has a solid balance sheet as well as liquidity position. However, still, it would be evaluating its capital expenditure program for 2020. It would be progressing with key projects & postponing less critical projects until they have further clarity regarding the tenacity of the existing travel impacts.

WAM Global Limited is an investment management Company with expertise in the Australian and global equity markets. The Company made its ASX debut on 26 June 2018, and since 2019 it has provided a dividend to its shareholders. During 1H FY2020, the Company declared an inaugural dividend of 3 cents per share, up 50% as compared to FY2019. The payment date of the dividend is 28 April 2020. The last election date for the DRP is 20 April 2020.

The Company’s 1H FY2020 results for the half-year ended 31 December 2019 was impressive with WGB reporting a 185.7% growth in its operating profit before tax to $27.2 million driven by sound investment portfolio performance as well as the growth in the assets over the period. The revenue of the Company from the ordinary activities soared 204.8% to $42,876,958. 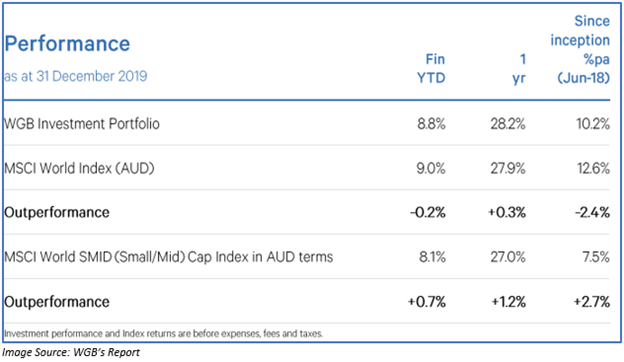 The Company made its ASX debut during June 2020 and has past dividend history. In 1H FY2020, the Company declared an interim dividend of 23 cents.

APA’s business model is a low-risk model. They have robust risk management practices in place. The manage counterparty risk by:

The Company’s revenue weighted average contract tenor on 1 January 2020 is in surplus of 12 years.