Canberra Has Affectionately Been Dubbed ‘The Weed Capital Of Australia’

The last Wednesday of September 2019 will be remembered in the Australian history when lawmakers in the ACT voted to pass the bill, allowing the people of the ACT aged 18 or above to possess and cultivate marijuana.

The new law will come into effect from 31 January 2020, permitting the residents of the capital territory to possess up to 50 grams of marijuana. It also allows the residents to cultivate two plant per person or four plants per household.

‘Drugs of Dependence (Personal Cannabis Use) Amendment Bill 2018’ is the historic legislation that was passed by the Legislative Assembly. The Bill was sponsored by a Labour Party Member of ACT Legislative Assembly from Yerrabi – Mr Michael Pettersson.

Mr Petterson, a former trade unionist, had introduced the bill in the year 2018. In his speech at the Legislative Assembly on a historic day, he said that the community had supported this cause, depicted by public research that found 54 per cent of Canberrans are in favour of the cause while only 27 per cent had opposed the cause.

Among the six states and two main territories in the country, Australian Capital Territory became the first one to legalise marijuana for recreational purposes. Although  the laws differ from state to state, in ACT, a person could be subject to fines of $160 on the possession of 50g or cultivating one or two plants. If the person has  possession of more than 50g, it could lead to two years in prison or fine of maximum $8k.

Although, the new legislation states that cannabis should be kept out of reach of children, and adult are not legally allowed to use it near children. In addition, the cannabis cultivation in the community gardens remains illegal.

According to the Australian Institute of Health & Welfare, Cannabis is the most widely used illicit drug in the country. It was also noted that cannabis is relatively easy to procure in the country.

In 2017-18, cannabis had the major share in the national illicit drug seizures at 52.7% and arrests at 48.8%. Despite the majority of the share, cannabis only accounted for 28.3% of the weight of illicit drugs nationally.

The 2016 National Drug Strategy Household Survey has shown that cannabis is still among the most popular drug out of the illicit drugs in the country. In Australia, 35% of the people aged 14 or above had used cannabis, and 10.4% had used cannabis in the past twelve months.

The below graphic illustration depicts the use of cannabis in the past twelve months in different age groups. 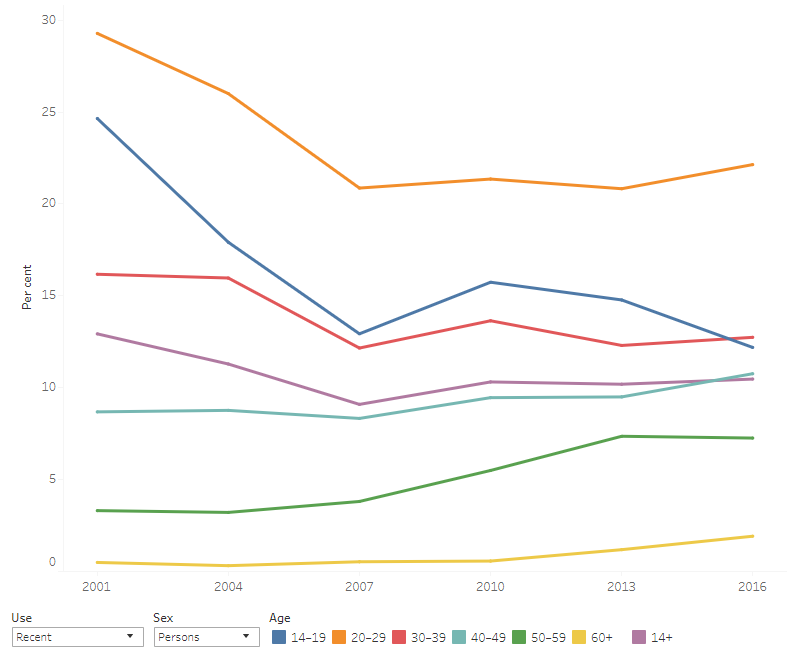 How Are Cannabis Cos Holding Up?

As such, there is no clarity on how it impacts the high growth, underdeveloped cannabis industry in the country. Among the cannabis majors from the ASX-listed universe, there has been no acknowledgement regarding the historic reform.

At a market capitalisation of ~209 million as on 11 October 2019, CAN is one of the largest companies, plying trade in the high growth industry like cannabis.

In the year ended 30 June 2019, Cann Group continued harvesting medicinal cannabis in its Southern & Northern facilities in Melbourne. The company had completed over 40 harvests from a base of genetics that consisted of 24 imported varieties.

In addition, the company had harvested its initial large scale crop of internationally sourced genetics. The existing facilities of the company were operating at the full capacity, and harvested crop was being supplied to manufacture the resin for reformulating to deliver that to the Department of Health of Victorian Government.

The company has said to place emphasis on the construction and development of the facility at Mildura. It was also said that the company has been working on to secure the debt funding to complete the facility.

It was also assessing the possibility to test the existing pathways to export for medicinal cannabis. The company was motivated towards creation of its third-party GMP product manufacturing capability with a partner, allowing to derive better formulations to be supplied for the country’s patients, and its offtake agreements.

In FY 2019, the revenue from the ordinary activities increased to $4.25 million from $1.5 million in the previous year, depicting a growth of 182.72% over the course. However, the net loss of the company increased by $6.2 million, reaching $10.92 million for the period.

At a market capitalisation of ~152 million as on 11 October 2019, AGH is also one of the largest companies, plying trade in the high growth industry like cannabis.

Subsequently, it represented the maximum number of patients prescribed to the use the medicinal cannabis of the company in a single month. The company has witnessed a month-over-month growth rate in new patients per business day was approx. 22.2%.

It was asserted that the uptick in the recent medicinal cannabis products is being underpinned by the company’s strategy, which includes an on ground medicinal science team and its proprietary platform that helps to reduce the application times for health care professionals prescribing the company medicinal products.

It was reported that the NSW Health had simplified the requirements for prescribers of medicinal cannabis in the country’s most populous state. Since 30 September 2019, it is reported that only approval by Therapeutic Goods Administration would be required in most cases.

The company had anticipated that the patient’s number would increase as a part of this change. It was said that the changes are implying the growing acceptance of medicinal cannabis by the government.