Can value-added Medicinal products change the course for Pot Stocks?

Cannabis, also known as marijuana among other names, has been in the news ever since it was first legalised in Canada in 2018, making it the second country after Uruguay (in 2013) to do so. While there was a lot of hype surrounding the cannabis industry in 2018 led by legal acceptance of medicinal cannabis in multiple countries, the industry couldn’t hit its strides in 2019.

The multiple challenges that the industry has faced include a disappointing framework in Canada for access to cannabis-based products such as supply issues and advertising restrictions, complicated legalisation procedures across different geographies and lack of innovative products from the companies.

However, with the approval of novel cannabis products - such as edibles, extracts, topicals and beverages - for sale by Health Canada on 17 October 2019, we could see a change in the outlook towards the industry. These new products are a part of value-added cannabis products that might change the dynamics of the cannabis industry with more countries likely to follow Canada in legalising the latest cannabis products.

Let us throw some light on these value-added products and their potential impact on the global cannabis industry.

What are value-added cannabis products?

While the efficacy and safety of these products remains the same as existing products, the ability to use them anywhere and everywhere makes them attractive for the users.

The new drugs, however, have a few risks associated with them. Unlike existing products, the effects of edibles do not show immediately after consumption and that can last up to a day. Also, the edibles are expected to be more potent than the other products, and thus, individuals need to be careful while consuming edibles. Further, it is advisable not to consume edibles with other products such as prescription medicines or alcohol.

What could be the impact of the new products on the cannabis industry?

Value-added cannabis products are expected to have a significant impact on the cannabis industry. As most of the people prefer products that are easy to consume, such as edibles including baked goods or even gummy bears, the adoption rates of the new products should be significantly high.

In a recent survey, ~11% of Canadian citizens said they were already consuming cannabis edibles while another 13% are likely to purchase them legally.

According to some market experts, the new cannabis products are predicted to add ~C$2.7 billion worth of sales to the Canadian cannabis market. According to another study, it is forecast that with the availability of new products, ~1.5 million new customers might be added to the Canadian market.

At a global level, a research firm predicted the cannabis edibles market to exceed US$11.5 billion by 2025.

With the benefits that the new products provide keeping the efficacy levels as the same as existing products, experts believe that the cannabis industry will get a significant boost in the future.

Despite 2019 being a disappointing year for the global cannabis industry, including the Australian markets, the Australian cannabis industry could have a bright 2020 just like it is estimated for the global markets. According to a research firm, the export market for the country is projected to reach ~$55 billion in 2025, potentially making it one of the biggest exporters in the world.

Let us look at a few ASX-listed pot stocks that could be impacted by Health Canada’s approval of these new products.

The company focusses on research and development activities through its various partners CSIRO and Agriculture Victoria, among others.

On 07 February 2020, Cann announced that it had secured funds for working capital requirements through the issue of convertible notes. The amount raised from the issue is ~$8 million and is likely to settle on 10 February 2020.

Primarily operated in Australia and Canada, THC Global Group Limited is a pharmaceuticals company engaged in the production of cannabis-based medicinal products and production and supply of hydroponics equipment and materials. The company has a strong presence in the three continents through its multiple partnerships with players such as Endoca (Europe), Bol Pharma (Israel) and Sinapse in Australia.

The overall strong quarter was aided by improved demand of products CannEpil® and Mercury Pharma 100 (MP100) and rising awareness of MGC’s products among healthcare professionals. 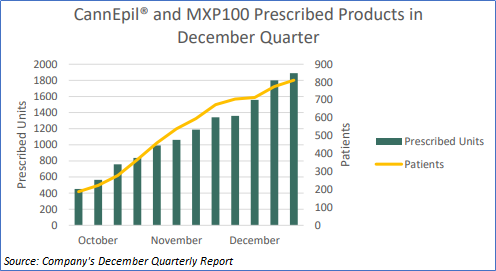 Althea Group Holdings Limited is engaged in the production, distribution and export of medicinal cannabis products. Also, the company provides an array of management services to aid both patients and healthcare professionals. Currently, with a presence in Australia and the UK, Althea aims to target Asian and European markets in the future.

Althea’s notable performance in the quarter ended 31 December 2019 reported a revenue of $1.1 million, which was 45% higher than the previous quarter. Also, the company had 4,018 patients by the end of December, exceeding its target of 4,000. Further, healthcare professionals recommending Althea’s products rose from 76 in the previous year to 432 by 2019 end.

In a recent announcement, the company updated that it would sell its HFA or Hemp Foods Australia to a subsidiary company of Shanghai Shunho New Materials Technology Co., Ltd in a deal worth $500k. Through the sale, Elixinol aims to update its strategy with an emphasis on hemp-derived CBD market.

Also, the company has decided against acquiring a cultivation licence for medicinal cannabis in Australian region. Elixinol intends to sell Nunyara-owned assets and use the proceeds to support its CBD operations.

CLICK HERE FOR YOUR FREE REPORT!
Tags:
ASX:AGH ASX:EXL cannabis ASX:MXC ASX:THC ASX:CAN
All pictures are copyright to their respective owner(s).Kalkinemedia.com does not claim ownership of any of the pictures displayed on this website unless stated otherwise. Some of the images used on this website are taken from the web and are believed to be in public domain. We have used reasonable efforts to accredit the source (public domain/CC0 status) to where it was found and indicated it below the image.