Nearmap Ltd and Audinate Group Limited are the two companies that investors would like to keep a close track post their good performance in 1HFY2019. Both the companies reported healthy growth in revenue and profitability. Considering the previous half performance, the investors would be keen to track the upcoming results from these two tech companies. In this article, we would summarize the recent achievements of the companies and their outlook, released to the market.

Nearmap Ltd (ASX: NEA) operates in the industrials sector. The company got listed on ASX in 2000. It supports its clients in securing deep location-based insights by offering premium geospatial content as a service. It serves businesses as well as government agencies. 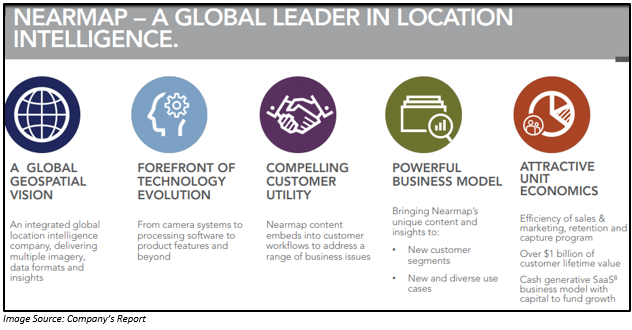 Recently on 6 June 2019, Nearmap Ltd announced the launch of Nearmap 3D, its latest product, which enables clients to stream as well as export 3-Dimension imagery on-demand and at a huge scale, using the company’s MapBrowser web application.

Nearmap 3D offers a fully immersive 3-Dimension experience to the clients. They can visualize cities in 3-Dimension from any angle through Nearmap 3D. The product allows the clients to measure distance as well as export custom regions in various 3D formats.

The company also plans to introduce the beta version of its AI product. The company has built highly precise machine learning models through its ongoing investment in research and development. It also deployed them on a large scale, changing millions of aerial images into valuable datasets, which can be used to measure change as well as quantify attributes more accurately and efficiently. All companies whether small businesses or large ones, in addition to cities, would be able to benefit from location intelligence, which is driven by artificial intelligence.

Now, the company is inviting clients to participate in the beta program and do the trial on various use cases.

In 1H FY2019, the company reported a 44% increase in the annualized contract value to $ 78.3 million as compared to the previous corresponding period. The revenue of NEA grew by 45% year-on-year to $ 35.5 million in the first half of the financial year 2019. 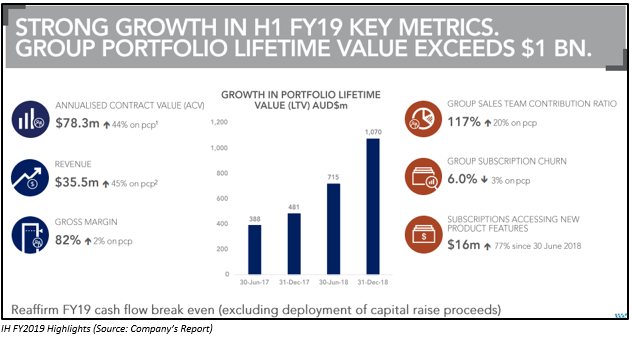 The company during this period launched a range of new products. It made offline 3D subscription available for its clients, as well as rolled out roof measurement tools, and enhanced integration and scalability for enterprise customers.

Moreover, the company introduced next generation of HyperCamera2, enabling the clients to make faster and higher capture. Using the existing extensive data set of Nearmap, the data science team of the company is carrying out research on deriving insights.

During the period, the company also raised capital, thus strengthening its balance sheet and helping it in accelerating strategic objectives such as international expansion, sales and marketing as well as product and technology development. Various projects as part of the company’s global scale-up are in progress.

Outlook and Priorities for 2H FY2019:

For 2H FY2019, the company’s outlook was to work on sales efficiency. During the period, BAU costs remained consistent with the first half. Other initiatives taken during the period are aimed at delivering growth over the next 12 - 18 months. The company made a range of releases to boost the workflow utility and stickiness of the MapBrowser platform, as well as 3D visualization and export tools.

The company highlighted that it would reaffirm cash flow break even for FY2019, which excludes the deployment of capital raise proceeds.

In the Macquarie Australia Conference, which was held in the month of May 2019, the company highlighted that its outlook and priorities for 2H FY2019 would include driving strong portfolio growth across Australia, New Zealand, United States and Canada. It would also look at other regions where there is a scope of expansion in the future. It would also continue to drive its leadership in delivering new products as well as content, extend its leadership in capture system along with processing. It would also make investments in data analytics for location intelligence.

The company also highlighted that it would change the way its customers work and enhance their experience via broader tools as well as easy to use platform.

In CY2019, trading was as per the expectations of the company. By the end of Q3 FY2019, the Group Portfolio LTV (Life Time Value) was more than $ 1.4 billion. The company also stated that it would continue to make investments for supporting sustained growth.

As highlighted in the operational position of 1H FY2019 and Macquarie Australia Conference, the company made significant progress in 2H FY2019. The launch of Nearmap 3D also supports the company’s strong foothold in the market. If the company achieves as per its outlook during the second half of FY2019, it would shine in the near future.

About the Company:  Serving a global client base, Audinate Group Limited (ASX: AD8) offers access to professional digital audio networking technologies. The Dante platform of the company helps in distributing digital audio signals over computer networks and is planned in such a way that it brings the benefits of IT networking to the professional AV industry. 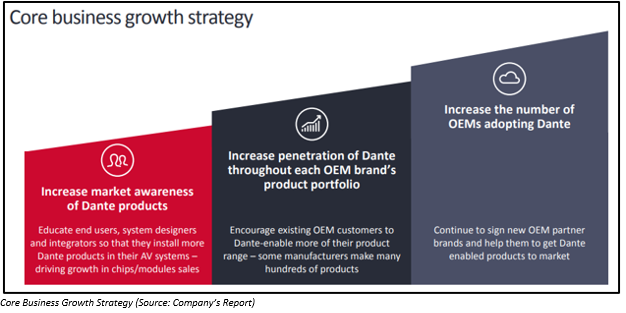 Dante Embedded Platform™ helps creators in providing complete Dante features in software, which runs on Linux for Intel as well as ARM processors. On the other hand, Dante Application Library™ helps designers in integrating the features of Dante into their personal computers and Mac applications. AD8 expects the new software-focused offerings to start making initial revenue contribution during FY2020.

The company stated that it would be introducing these products in association with three partners, namely QSC, Analog Devices and Zoom Video Communications Inc. These three companies would be representing their solutions at InfoComm 2019 show in Orlando.

On 6 June 2019, Audinate Group announced that it had completed a $20 million institutional placement. The placement was made for sophisticated and professional investors, with the company offering approximately 2.86 million new fully paid ordinary shares in Audinate. Each share was issued at a price of $ 7.00, which represents a 5.9% discount to the last traded price of the shares of the company on 4 June 2019 and a 6.3% discount to the 10-day volume weighted average price of the shares of the company till 4 June 2019 of $ 7.47.

Further, post the completion of the institutional placement, the existing eligible shareholders of the company would be given an opportunity to subscribe for new shares in the company via a Share Purchase Plan (SPP) at the same price that of the institutional placement. The documents of the SPP was dispatched to these existing eligible shareholders on 12 June 2019.

The funds raised through the equity raising would be used in boosting sales, marketing as well as training footprint of the company across new product markets. Moreover, the equity raising will be used to support the product range expansion of Dante AVIO adapters and Dante AV. It would also help in reducing the timeframe for the implementation of Dante software. The company would also direct some of the funds towards adding strength to the balance sheet of the company and support the development of next-generation Dante platform.

AD8 reported a very good set of 1HFY2019 results, with revenue showing a growth of 60% to $ 14.2 million from $ 8.8 million. EBITDA shot up to $1.7 million from $ 0.1 million. It reported an operating cash flow of $ 0.6 million. As part of its strategy to grow revenue in FY19 and the future the company declared its key priorities few of them were: Expand the offering to make inroads within the OEMs, promotion of key products such as Dante AVIO adapters and Dante Domain manager, commercial launch of Dante AV module in mid CY2019.

Conclusion: Launch of new offerings and capital raising put the company in a strong position in terms of expanding its business. The company seems to be on track for further growth in the future. 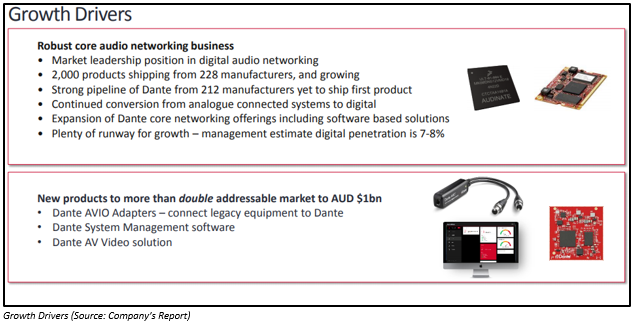 The shares of Audinate Group Limited have given an outstanding return of 122.89% in the previous six months. With the opening of ASX on 10 July 2019, the price of its shares was A$ 8.300. By the end of the trading period, the stock traded flat, standing at A$ 8.180. Audinate Group Limited has a market capitalization of A$ 525.94 million and approximately 64.3 million outstanding shares.