A Look At Upward Momentum Of Nearmap

Nearmap Ltd (ASX: NEA) is a technology-driven company which provides its customers instant access to high-resolution aerial imagery across Australia. Its technology is frequently updated and provides current and accurate aerial views. It caters to Australia, the US and New Zealand. NEA has expanded to Canada recently. Industries that use NEA’s services include engineering, rail, construction, property and insurance.

The company aids users to save time and money, hence avoid road rush by providing inspected and monitored locations on its cloud-based platform.

In the past 12 months, the company has depicted upside momentum on ASX with the stock price up by 274.73%. The total Global aerial imagery market was estimated at USD$7.4 billion in 2018; and is anticipated to grow up to USD$10.1 billion in 2020.

In H1 FY19, the Annualised Contract Value (ACV) soared up 44% and was valued at $78.3m and helped the revenue post a growth of 45% and was at $35.5m. The gross margin, however, improved by 2% and stood at 82%. The company’s group sales team contribution ratio was improved by 20% when compared to pcp and was recorded at 117%. The group subscription churn, at 6.0%, witnessed a downward movement of 3% from pcp. The subscriptions accessing the new products feature paced up by 77%, since June 2018 and was valued at $16m. 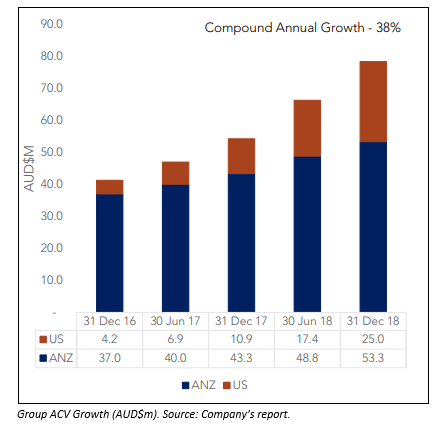 The company is keeping its upward trend intact, as witnessed by the growth in its operations. Offline 3D subscription, Tool for Roof measurement, enhanced integration and scalability for the enterprise customers were amongst the new products that the company launched. It also had the HyperCamera2, allowing higher, faster capture. A Data science team was into research to derive insights from the company’s data set. The balance sheet was in a strong position. The newly opened office in New York is a doorway to an expanded market, outside Australia.

Looking at its equity structure front, the company issued 708,345 Fully Paid Ordinary Shares on conversion of Options on 29th April 2019.

Earlier this year in February, the company had released its half-yearly report.

Below are the cash flow details of the company as released in its report: