Let’s have a look at the Small-Cap Index to understand the past performance and fundamentals in terms of valuation parameters.

The S&P/ASX Small Ordinaries Index (XSO) is used as an institutional benchmark for small-cap Australian equity portfolios and the index is designed to measure companies included in the S&P/ASX300, but not in the S&P/ASX 100. The XSO comprises 196 companies with the largest total market cap of $8792.58 million and the smallest total market cap of $81.8 million as of 28th June 2019.

Looking at the historical performance of S&P/ASX Small Ordinaries Index, we infer that the index has been underperforming the S&P/ASX 300 and S&P/ASX 200. The graph shows that from the mid of 2012-2013, the gap has started to widen which broadly, has sustained.

Index Performance (Source: Fact Sheet of S&P/XSO as of June 2019)

Let’s discuss a small cap company from resource space, which may generate a handsome return in the coming years.

Bellevue Gold Limited (ASX: BGL) is engaged in the exploration of the Bellevue Gold Project. Bellevue was once one of Australia’s richest gold mines, producing 800,000 ounces of gold at an impressive grade of 15 grams per tonne over a mine life that spanned a century. However, gold production ceased at the mine in 1997, and has effectively been ‘parked’ since then. Bellevue had missed out on major advances in the exploration techniques and the gold price resurgence over the past decade. The company acquired the Bellevue Project during 2017 and FY18 and declared a maiden JORC inferred gold resource of 1.9 million tonnes at 8.2g/t gold for 500,000 oz for the project.

Capital Raising Program: During FY18, the company raised capital to fund the exploration drilling at Bellevue, complete the resource estimate, and for general working purposes. The capital raised amounted to $3.4 million in August 2017, $5.0 million in November 2017, and $8.0 million in March 2018. The company as on 22nd February 2019, announced that it has commenced a ~$20 million placement of around 37 million shares at a price of $0.55 per share. The Placement was supported by institutional and sophisticated investors based in Australia. The Placement was well supported by North American institutional investors, which also includes a number of specialist global gold funds. The Placement price was a discount of – (a) 9.8% to the stocks’ last closing price of $0.61 per share on 19th February 2019; and (b) 5.8% to the 10-day volume weighted average price of $0.58 per share. The company will deploy the raised fund for ongoing exploration at the BGL’s flagship Bellevue Gold Project and for general working capital purposes. The Management also stated that the company is fully funded to undertake drilling activities at its flagship project for the next one-year.

During FY18, the company achieved few milestones with regards to the exploration of the Bellevue Gold Project, underpinned by a successful drilling campaign, which returned significant high grade results, discovery of the high grade Tribune Lode, a second high-grade discovery known as Viago Lode, a rapid delineation of a resource estimate at the Tribune Lode discovery. The company has acquired a dominant project portfolio around the Bellevue Gold Mine in a well-endowed mining district and within close proximity of the existing gold operations. It currently holds more than 4500km for gold and potentially base metals.

The project has seen a rapid resource growth with multiple drill rigs turning with low discovery costs of $15 oz. The project in last 18 months has reached from discovery drill hole of [email protected] 27.4 g/t as on 20th November 2017 to 1.8 m oz @ 11.1 g/t of gold in the third quarter of FY19. 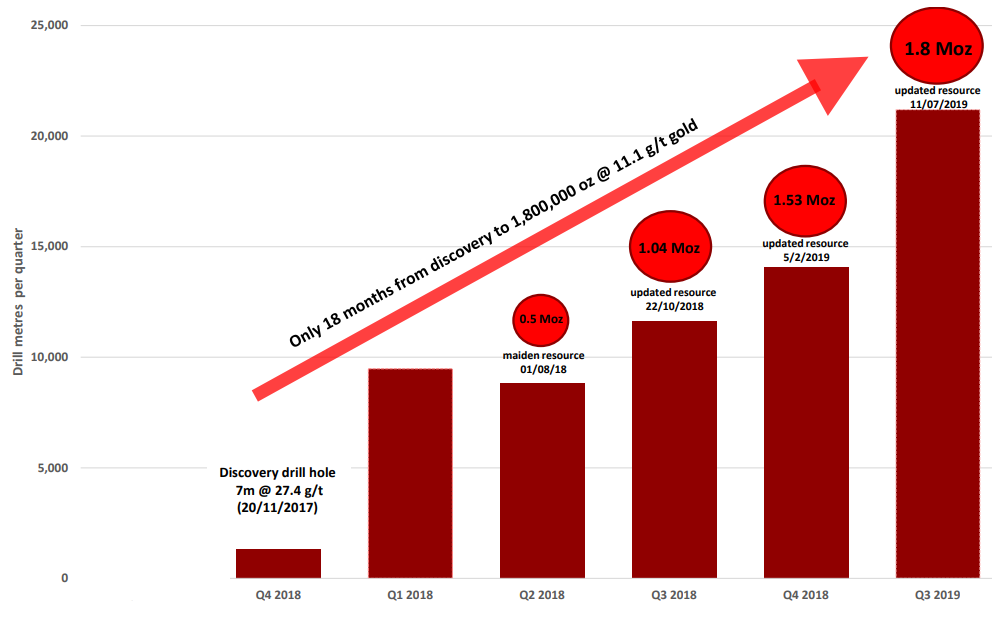 Shareholder Summary: As per the latest report on 15th July 2019, total global and domestic institutions hold 41%. Major substantial shareholders, 1832 Asset Management LP accounted for 11% of the total shareholding, followed by Tolga Kumova at 9%. The Board and Management, on a fully diluted basis, hold approximately 11% of the total outstanding shares.

The company has unique opportunity to unlock the full potential of one of the oldest, high grade gold mines. The company, since the acquisition of Bellevue Gold Project, has witnessed a significant progress with uncovering potentials.