In this article, we would discuss two stocks that have performed well in the past and their shares have also given decent returns in the year 2019.

Electro Optic Systems Holdings Limited (ASX: EOS) is into the business of designing, developing and manufacturing advanced electro optic technology devices and systems for the space as well as defence markets.

During 1H FY2019 ended 30 June 2019, on a consolidated basis, the company’s revenue from ordinary activities increased by 62% year-on-year to $57.43 million, while net profit after tax registered growth of 40.8% to $7.52 million on the prior corresponding period. Net cash used by the company in its operating activities was $1.28 million. The position of net cash by the end of 1H FY2019 was $36.23 million.

During the six-month period to June 2019, EOS Defence Systems reported a profit before tax of $10.9 million, represented an improvement in EBIT, which was noted at $10.6 million for the period. The improvement in the result was partly attributed to improved efficiency as plant utilisation moved past 60% of full capacity in the Australian plant located at Hume, Australian Capital Territory. For this segment, the improvement was reported in marketing, investment in new products or customisation of the current products. In locations such as the US, Singapore and the UAE, the company also initiated capacity expansions. 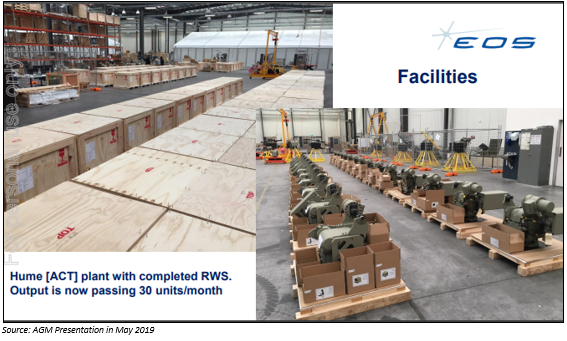 EOS Space Systems registered a loss of $1.2 million during the six-month period to June 2019, which was in line with the company’s expectations. This segment of the company continued to make strong investments in research & development activities.

Defence segment: The company expects to register stronger results in 2H FY2019, based on further improvements in capacity utilisation; however, this improvement will be largely offset by significant investments EOS is required to direct towards management, engineering and production resources in order to prepare for the next level of growth.

The company during 2016 to 2019 also implemented a plan for the expansion of the annual RWS production capacity of 600% from $50 million to $300 million, with the plan entailing the establishment of a scalable production in Australia, as a template that could be replicated across the globe.

Electro Optic Systems Holdings is required to start the next level of capacity expansion at least one year before output starts to saturate at $300 million of yearly production. In this phase, capacity would be targeted to grow by 300% during 2020-2024 in order to achieve an annual production capacity of more than $900 million.

Three aspects of the new expansion include New Plants, New Processes and the Supply Chain.

The sector has ample contract backlog to obtain the forecast EBIT growth for 2019, 2020 and 2021. At the same time, the company is looking for more contracts which would support in boosting revenue by 2020 as well as pushing production requirements above the existing capacity.

Space Segment: EOS is expecting to register sufficient profit from the EOS Space Sector in the second half of the year. This segment is currently participating in more than $200 million of potential procurements across the globe. The outlook for the EOS Space Sector is positive and improving. 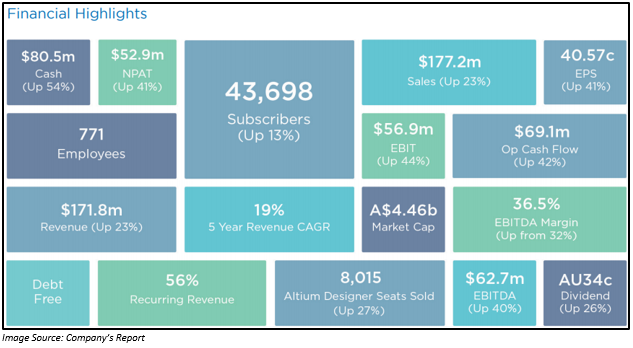 The company is aiming to become a PCB design software market leader. The company expects to achieve revenue of US$200 million by 2020. Additionally, it is is focused and dedicated towards achieving market dominance by 2025 with 100,000 subscribers.

Electro Optic Systems Holdings Limited and Altium Limited have delivered strong results in their recently reported financial reports. Additionally, the companies are focused and committed towards achieving their long-term objectives. One can expect that the shares of these companies in the upcoming period would deliver a better return.