The last year of the decade had seen one of the most drastic shifts in the interest-rates scenario globally. In 2018, the Federal Reserve in the US had raised the federal funds rate four times. The last rate increase was announced in December 2018. At that time, there was a general expectation in the market that interest rate will continue to rise with the Fed at least announcing two more hikes in 2019.

And, what happened in 2019 was quite contrasting to what was predicted in late 2018.

Interest rates started moving down across the globe, and in Australia as well. During 2019, the Reserve Bank of Australia (RBA) slashed the cash rate on three occasions, 0.25 per cent each time. Cash rate cuts in June, July and October were directed by the RBA in a bid to salvage the plaguing economic conditions. While, the income tax rate cuts introduced by the Commonwealth Government to increase the disposable income further augmented these interest rate cuts to some extent.

However, the RBA’s policy stance was not appreciated by the consumers, as noted by the Westpac-MI Consumer Sentiment Index in November 2019.

Presently, the cash rate stands at 0.75 per cent, and the RBA lowered the cash rate in June 2019 (first time) after a pause that lasted over two-and-half years with the previous cash rate cut being in August 2016. 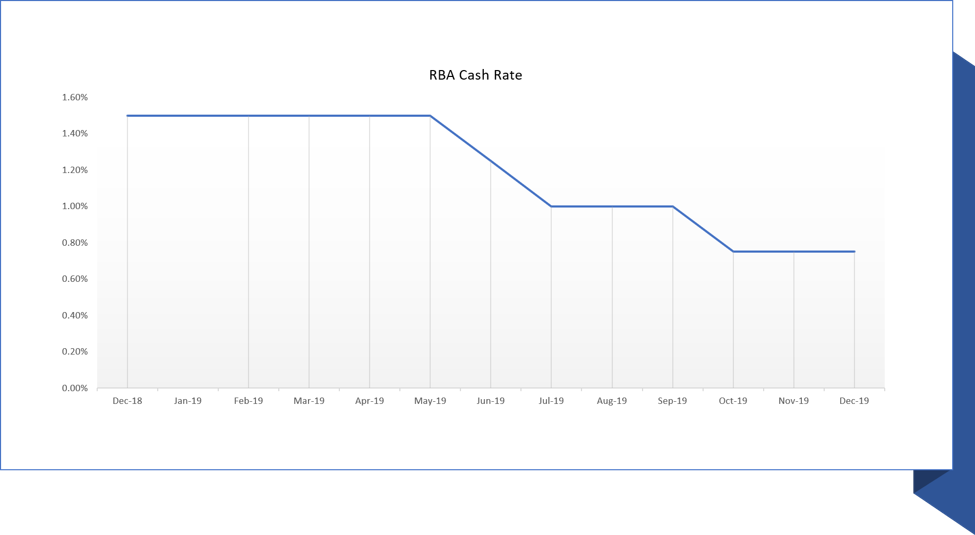 The below chart depicts the changes in Australian Government Bond Yields from 21 January 2019 to 21 January 2020. It is evident that the yields on the domestic sovereign bond market have come down significantly.

In 2019, the increasing recession expectations took a toll on bond yields along with the impact of interest rate cuts. The scenario is expected to remain same in 2020 as well, following the RBA’s easing monetary policy stance. 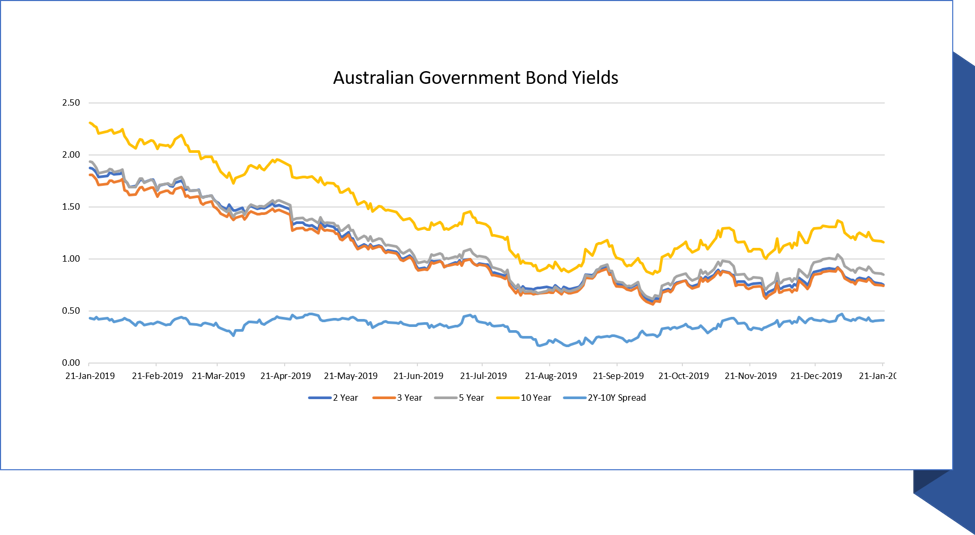 According to the Australian Prudential Regulatory Authority (APRA), by June 2019, there were 148 Authorised Deposit-taking Institutions (ADIs) operating in the country with assets of $4.54 trillion, up from $4.32 trillion in the previous year.

The economy is experiencing a rise of neo- lenders, with some typically not acting as an ADI but providing a type of financing. The rise of buy-now-pay-later companies in financing purchases that used to be financed by credit cards could be major shifts in the high-margin business of the banking companies.

And, the country is also witnessing the emergence of focused lenders, particularly in the consumer financing areas but not limited to other areas such as small business financing – Prospa Group (ASX:PGL).

During the first five months of 2019, credit creation was subdued. The RBA data showed that total credit growth was in the range of 0.2% to 0.3% on a monthly basis during this period. The rate cuts over June to October, were targeted towards tackling this situation.

It appears that the personal credit market is experiencing significant stress, and this could be due to new channels of consumer financing, which we had discussed earlier.

Revival of the Housing Sector

Australian property depicted some optimistic trends during the second half of 2019, and in November 2019, the country’s property prices recorded their largest gain in the single month since 2003, according to CoreLogic. Since June 2019, the property prices in the country have increased by more than 4.7 per cent.

Also, the data from the Australian Bureau of Statistics (ABS) suggests that weighted average increase in property prices of eight capital cities in the country increased by 2.4 per cent in the September quarter.

As per the latest data released by the ABS, the loan values had depicted a rise in the month of November2019 (up 1.6 per cent), marking a sixth consecutive month of growth. In in the same period, the owner occupied first home buyers constituted around 30 per cent of the new housing loan commitments.

Year 2020 has marked the launch of “First Home Loan Deposit Scheme”, which is likely to further boost the mortgage demand in the country for first-time buyers. And, this scheme is likely to enable first-time homebuyers to apply for a mortgage at 5 per cent deposit.

Open Banking Delayed for a While

Open banking is to set allow consumers to choose from a wide range of service providers through data mobility across competing banks/service providers. Its launch is delayed for a while now, and the banks along with industry have been preparing for this regime change in the industry.

In open banking regime, the customers would have an option to share their data with competing service providers and switching banks would be easy. The data would include transaction history, personal information and some other data which would be required to switch any service across service providers.

Further, plans are in place to roll-out open banking regime into the energy and telecommunications sectors as well.

Opportunities for the Big Four Banks

The opportunities for growth in the banking sector, especially for big four banks are limited to core areas of the business. And, the big four giants are likely to concentrate on their core offerings to deliver robust outcomes going forward.

Green shoots in the economy are likely to bring more optimism to the banking industry, and a decent pick-up in GDP growth could prove to be a favourable outcome for the big four banks.

Some more factors such as revival in the consumer confidence, household spending levels, wage growth, and employment would deliver better outcomes for the economy, and consequently, for the banks as well.

And, as the risks of slow-economic growth fade away, the Australian government bonds could yield much-higher than what is on the table presently, which is likely to be favourable for net interest margins.

With interest-rates at rock bottom level, the big four banks are presented with an opportunity to refinance the existing debt capital. And, the APRA’s decision to increase total capital adequacy ratio by 3 percentage points by 2024, would make the big four banks more resilient.

The big four banks are also exposed to risks, including a downturn in economic activity, geopolitical crisis, deterioration in asset quality, a drastic increase in number of bankruptcies, regulatory overhangs like class actions, proceedings.

Also, the big four banks have been investing in technologies and digitisation, and failure to achieve desired outcome from these investments could hurt the operating performances of the big four banks. Moreover, the execution risks also prevail.

Further, the big four banks could have some adverse impact due to damaging weather conditions like droughts, bushfires, and other natural calamities.

CBA posted a net operating income before impairment and operating expenses of $24.33 billion, and net profit after tax from continuing operations was $8.37 billion. In FY 2019, the bank delivered total dividends of $4.31 per share.

WBC posted a net operating income before impairment and operating expenses of $20.64 billion, and net profit after tax was $6.79 billion. In FY 2019, the bank delivered total dividends of $1.74 per share.

NAB posted a net interest income of $13.55 billion, other income of $4.37 billion, and net profit after tax from continuing operations was $5.09 billion. In FY 2019, the bank delivered total dividends of $1.66 per share.

ANZ posted an operating income $18.78 billion, and net profit after tax from the continuing operation was $6.31 billion. In FY 2019, the bank delivered total dividends of $1.60 per share.

As such, the big four banks are yielding over 6 per cent, except for CBA, according to the data based on closing prices of 22 January 2020.