All About Retirement In A Warren Buffett Context

It is strange yet understandable that the greatest investor of all times has his investment thesis revolving around simplicity. Famous for his discipline and conservative approach to investing, Warren Buffett, an American business tycoon, speaker, investor and philanthropist has often been referred to as the Wizard, Sage and Oracle of Omaha for his investing style. Investors preach and follow his tips religiously with the hope of being successful in their own investments.

Todayâs article would revolve around the retirement strategies that Mr Buffett believes in, and advice that he has for people to have a saner after-work life. But before devouring ourselves to his investment philosophy, let us get acquainted with the Wizard and his company:

Regarded as one of the most successful investors of all times, Warren Buffett was born in Omaha and developed an inclination towards investing in his youth. He brushed his investing skills at the Columbia Business School and attended the New York Institute of Finance. Mr Buffett created Buffett Partnerships Limited in 1956, which went on to acquire Berkshire Hathaway, a textile manufacturing company, which presently owns over 60 companies worldwide (including Duracell, Dairy Queen and Geico).

Since the acquisition, Mr Buffett has been the companyâs largest shareholder and Chairman. The pioneer has pledged to give away over 99 per cent of his fortune towards philanthropist causes and in 2019, he donated US$3.6 billion, majority of it to Bill and Melinda Gates Foundation.

An American multi-national conglomerate holding company, Berkshire Hathaway Inc. has a diversity of products- investments, insurance, food processing, aerospace, utilities, automotive, consumer products and retail, to name a few. It was founded by Oliver Chace and Warren Buffett and is headquartered in Omaha. The company is best known for leadership and control by Warren Buffett. It has averaged an annual growth of 19 per cent in book value since 1965.

As per the financial results, which was released in August 2019, the companyâs total revenue (by its operating businesses) was up by 2.3 per cent on a Y-O-Y basis, to US$63.6 billion. The operating earnings amounted to US$6.14 billion (down by 11 per cent on previous corresponding period). The decline was primarily driven by lower underwriting income at the companyâs insurance operations. At the end of the period, the company had the highest amount of cash and equivalents at US$119.12 billion, on its balance sheet. This was as compared to US$110.5 billion reported at the end of 1Q 2019.

It should be noted that the company earned US$5.74 per class B share in the second quarter of 2019, up by 17.8 per cent on prior corresponding period. 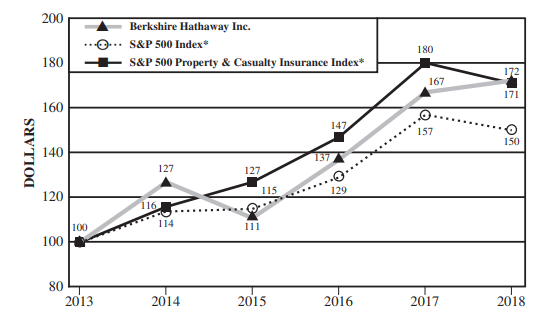 It is a globally accepted belief that retirement planning is a necessary evil, and a chore that everyone needs to perform. Now that we understand Mr Buffett and his company, let us look at the retirement advice that the tycoon swears by:

Why Are Index Funds suited for Retirement?

Mr Buffett believes that consistently investing in a low-cost index fund makes the most sense practically at all times. Index funds, a form of passive investing, hold every stock in an index, including big companies, and offer low turnover rates, which consequently means that fees and taxes charged to them are always on the lower side.

Mr Buffett suggests that one should keep buying these funds, irrespective of the market conditions, as business is dynamic, and one should not lose out on time if a temporary crisis arises. His inclination towards index fund arises as these funds are a great way to avoid the risk of picking individual stocks. Moreover, these funds have the tendency to accumulate brownie points when it comes to saving on fees and charges, which are cumulative expenses.

Breaking down the concept further, the trick of trade is not to pick the right company but buy all the big players (through S&P 500, for example), and consistently apply this practice to build a portfolio of very low-cost funds, because as Mr Buffett says- Costs really matter in investments.

Closer to home, let us look at a couple of index funds which one can consider investing in and which are listed and trading on the Australian Securities Exchange:

The Vanguard Group Inc, founded in 1975, is one of the worldâs largest and most experienced indexing specialists, with offices in London, United States, Tokyo, Australia and Singapore, to name a few. In the Australian context and as of 30 June 2019, it has total assets under management worth of A$7.9 trillion.

Incepted in 2000, BlackRock Investment Management (Australia) Limited is the responsible Entity for the iShares S&P 500 ETF. The company has exposure to huge, well-established U.S. players and provides low-cost, tax efficient access to 500 of the largest companies in US by market capitalization.

One should understand that there are no guarantees in the stock market, but Mr Buffett has the conviction that index funds are perhaps the smartest of investments.