As the selection of an appropriate stock for investment requires a lot of time and energy, investors can make use of some relevant tools that help in stock selection. One of such widely used and effective tools is the price-earnings or P/E ratio, which is calculated by dividing the stockâs current market price by its earning per share (EPS). This ratio gives an idea to the investor about the growth potential of a particular stock.

A stock with a high P/E suggests that the investors are paying a higher price for the share relative to its earnings, while a lower P/E indicates that one is getting more earnings from the particular stock for the investment made.

However, the low P/E ratio does not confirm that the companyâs earnings will fall in the future. So, an investor should also study the other aspects of the company before making an investment decision. Considering this, let us discuss three financial stocks with a low P/E ratio (below 15x) listed on the ASX:

Resimac expects its Normalised NPAT to be in the range of $24 million to $27 million in 1H20, that reflects lower 1st quarter funding costs propelled by the relatively low spreads between the Australian central bankâs cash rate and 30-day Bank Bill Swap Rate (BBSW) and continued strong Assets Under Management (AUM) growth.

The company assumes spreads between 30-day BBSW and RBA cash rate to remain broadly in line with current levels and expects its NPAT of 2H20 to be lower than that of 1H20. In addition, the company anticipates a continuation of uncertainty about the central bankâs monetary policy and interest rates in 2020.

NPAT: The companyâs Statutory and Normalised NPAT increased by 86 per cent and 19 per cent to $47.2 million and $31.1 million, respectively during the period.

RMC closed the trading session higher on 22nd November 2019 at $1.240, with a rise of 9.7 per cent relative to the last closed price. The stock has generated a return of 189.4 per cent in the last ten years.

Navigator has released its FY20 earnings guidance after taking into account known subscriptions and redemptions for the December 2019 quarter, year-to-date actual results to 31 October 2019 and the impacts of cost rationalisation. The company expects to attain an EBITDA of about $33.5 million in FY20.

The company notified that its full year result would be materially consistent with the EBITDA achieved in the second half of the previous financial year - $17.6 million.

EBITDA: The company earned a record EBITDA of $37.7 million that was 10 per cent up on the prior year. As per the company, its EBITDA was largely consistent with the cash flow which was generated from its operating activities, and which was available to pay dividends to shareholders. 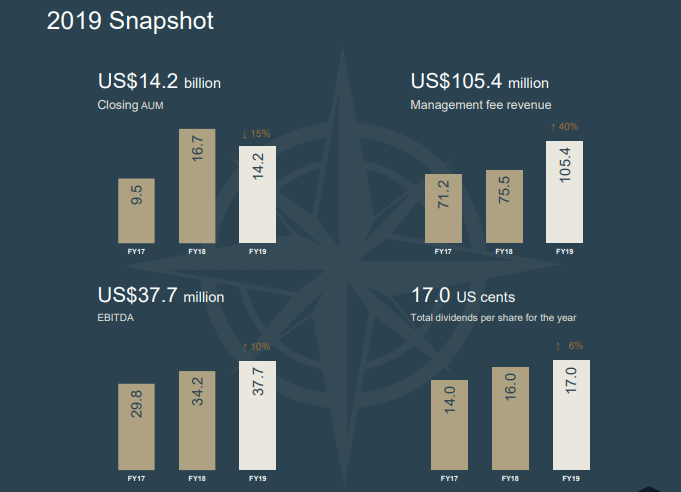 The non-operating holding company of a diversified financial services group, MyState Limited (ASX: MYS) is a leading provider of wealth management, banking and trustee services to customers around the country via its retail brands - Tasmanian Perpetual Trustees and MyState Bank.

The company recently notified that its Non-Executive Director, Mr Stephen Lonie, passed away after a short illness.

The company reported the following financial results for the period ended 30th June 2019:

NPAT: The company recorded a decline of 1.5 per cent in its Statutory NPAT to $31 million in FY19. Excluding the effect of its discontinued operations, its NPAT fell from $31.3 million to $29.8 million.

Cost-to-Income Ratio: The companyâs cost-to-income ratio increased from 62.7 per cent to 64.8 per cent, adversely impacted by growth in technology related costs and reduced income related to movements in BBSW linked funding costs.

It is worth noting that all these financial stocks that have low P/E ratio have delivered significant returns in the last ten years. However, it should be kept in mind that though P/E ratio is an important indicator of companyâs performance, an investor should do a proper research before buying or selling a stock on the basis of a single factor.