A look at Lendlease & Mirvac: Growth versus Challenges

The real-estate sector witnessed a topsy-turvy year during FY19 period, wherein most of the companies were struggling to sell their units due to lower consumer spending and credit worries across the lending industry. We will be discussing two real estate and property management stocks which is now showing signs of improved top-line though struggling with margin pressure.

Let’s have a look at Lendlease and Mirvac with their recent updates.

Lendlease Group operates in retail property management, asset management and construction of several greenfield projects primarily in largescale urban projects. The company operates across the regions of Asia Pacific, Europe and the Americas.

Operating performance for FY19 for the period ended 30 June 2019: LLC notified on its FY19 financial report, wherein the company recorded revenue of $13,414 million as compared to $13,287.9 million in FY18. Profit after tax came in at $804 million, down by 16% on y-o-y basis on account of inclusion of $500 million pre-tax provision on underperforming projects booked in first half of FY19. Group EBITDA, during the year stood at $1,328 million, decline 9% on y-o-y basis. Construction and investment segment took a hit and reported operating EBITDA of $211 million and $489 million, registering a decline of 29% and 27% on year-on-year basis. 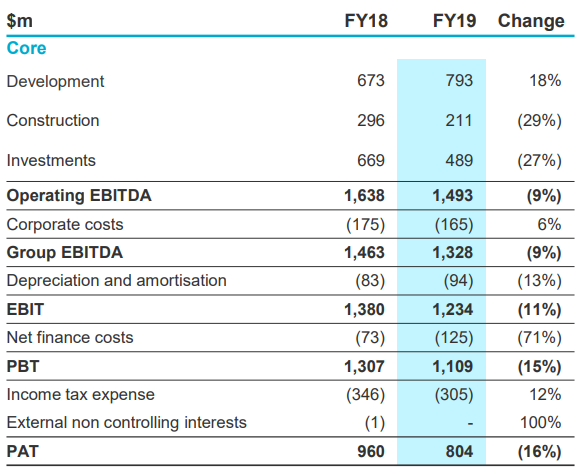 Development: This segment business reported operating EBITDA of $793 million from development segment, reporting a growth of 18% on y-o-y basis. Development segment reported ROIC of 11.6% and a capital investment of $4.8 billion. The product pipeline of the business stood at $76.1 billion as on FY19. The year was marked by strong residential for sale apartments while subdued performance persisted in communities’ segment across Australia. The Asia region reported strong EBITDA driven by Paya Lebar Quarter. Europe region reported lower EBITDA due to lesser completion of projects. The Americas segment reported higher EBITDA driven by first contribution from urbanisation projects.

Core Construction segment: The Australia segment derived strong revenue growth of 8% to $4.1 billion. EBITDA margin for the five-year stood at ~4%. The company secured new work of $4.5 billion including Sydney Metro Martin Place and Victoria Cross integrated station developments, Melbourne Park Redevelopment Stage 3. Within the Americas segment the business reported a decline in revenue of 9% at $4.3 billion followed by weaker activities across LA and Chicago. Net work secured from the segment stood at $3.7 billion. The European segment delivered stronger margin and revenue growth driven by benefits from high margin construction and management contracts.

Management’s view and action: As per the Engineering and Services segment, the management will look for strategic review of the segment as the segment is going through several headwinds. As per the management’s commentary, the Engineering segment in Australia has the potential to drive strong business growth in the coming years, while on a macro level, the sector is going through several challenges. Due to the under-performance of the engineering segment, the management has decided to sell the segment and they have started the sales process. The business reported that the it has received good level of interest from parties looking to acquire either the whole business or Engineering or Services separately.

Within the Office segment, the business completed approximately 17,700 square metres of leasing activity. Also, the company maintained a high occupancy of 98.4%.

The company reported $3.1 billion active office development pipeline during the period, which is 90% of the pre-committed. Construction further progressed during the quarter, with the following key highlights:

Industrial Segment: The company maintained high occupancy of 99.7% with a WALE of 7.5 years. The business completed approximately 8,000 square metres of leasing activity during the quarter. The company submitted a Development Application for the masterplan of a new industrial led employment precinct at 300 Manchester Road, Auburn.

MGR settled 613 residential lots and on track to achieve over 2,500 settlements during the quarter while defaults remain less than 2%. The business maintained a high level of residential pre-sales at $1.3 billion during the quarter. In Q1FY20, the company released over 240 lots during, with steady sales at the masterplanned communities, across the FY20 releases to date, which includes:

The company entered into an agreement to acquire 18-hectare site at Milperra, NSW with the opportunity to develop approximately 350 homes.