We are discussing five fundamentally strong companies with stable business performance. The associated stocks have generated healthy returns in the recent past. Let’s have a look at the companies.

On 20 September 2019, CSL informed that one of its directors named Paul Perreault has disposed 5,350 ordinary shares and his current holding stands at 128,031 ordinary shares.

The company announced an unfranked dividend of USD 1for each ordinary share, payable on 11 October 2019.The annualized dividend yield of the stock is at 1.12%.

Outlook: The management expects strong demand for plasma and recombinant products in FY20, while it expects marginal improvement in the plasma segment. CSL expects Seqirus to deliver inline results and likely to benefit from product differentiation and process improvement. While the Management expects revenue to grow at 6% during FY20 and the NPAT is projected between US$2,050 million to US$2,110 million, higher by ~7-10% from FY19.

The company reported active customers at 4.6 million at the end of FY19, up 130% y-o-y; currently on-boarding stood at 12,500 new customers per day. US and UK witnessed growth which was better than previous estimates aided by major new merchant brands continue to on-board. The Management expects future expansion and platform innovation in the US on account of strategic partnership with VISA. Underlying free cash flow for the financial year FY19 stood at $33.3 million indicating a high return on capital employed (ROCE) business model.

FY19 Financial Highlights for the year ended 30 June 2019: NEA announced its full year financial report, wherein the company reported 45% increase in revenue at $77.642 million and net loss of $14.93 million, increased 35% y-o-y. Employee benefits expense during the year stood at $36.84 million as compared to $31 million in the previous year.

The company reported cash and cash equivalents at $75.91 million, total assets at $158 million and net assets at $87.65 million as on 30 June 2019. During the year, NEA made product and content expansion such as the roll out of 3D Online. Moreover, the company launched an Artificial Intelligence product (beta version). Again, NEA conducted capture program expansion including the first capture of Canadian content, covering 64% of the population. Cash costs of capture were higher by 22% on prior year basis.

REA Group Ltd (ASX: REA) owns and leases various  properties across the U.S., Europe, Australia and Asia which are utilized in the conduct of the company’s businesses.

Recently, REA notified that one of the company’s director named Tracey Fellows disposed off 9,100 ordinary shares at a consideration of $956,428. The total number of ordinary shares held by Tracey s after the disposal is 7,386.

Key Performance Highlights for the year ended 30 June 2019: REA announced its full year financial report, wherein the company reported 8% y-o-y growth in revenue of $874.9 million and NPAT of $295.5 million, up 6% y-o-y. Revenue from Australia segment grew by 9% at $799.3 million as compared to $734.1 million in the previous year. EBITDA margin stood at 57%, with no change from previous year. The business reported 8% decline in Australian national listings, including 18% in Sydney and 11% in Melbourne. The company reported growth in Commercial and Developer revenue despite the slowdown in dwelling commencements. 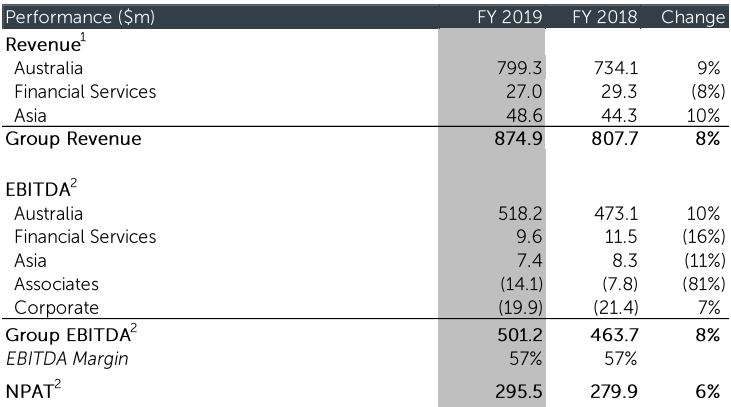 Resmed INC (ASX: RMD) is a software company and derives its revenue from countries like U.S., Canada, and Latin America etc.

Key financials for the year ended 30 June 2019: The company announced its full year results for financial year FY19 wherein the company reported revenue growth of 11% y-o-y at US$2.6 billion; up 13% on a constant currency basis. The company reported net profit at US$404.6 million, up 28% y-o-y. Gross margin expanded 80 bps to 59.0% during FY19. The company reported higher gross margin, as a result of positive contribution from MatrixCare, along with benefits from manufacturing and procurement efficiencies, which partially offset the decline in average selling prices.