The substantial rise of digital media content has led to the subsequent decline of newspapers and magazines. This is happening not only in the Aussie media industry but all over the world.

Meanwhile, the BSA ACT or Broadcasting Services Act 1992 outlines the regulations for the conventional tv and radio broadcasting space in Australian region, and also forms the provisions for regulating portion in the internet space.

It also gives powers to the ACMA or Australian Communications and Media Authority for regulating and observing the broadcasting sector. ACMA develops co-regulatory codes of practice for the FTA or free-to-air commercial and community tv and radio space and outlines the rules for the subscription in both tv and radio industry.

Further, print news media has made self-regulatory standards for practicing it. The Australian Press Council is the main body that sees to the grievances against Australian newspapers and associated digital outlets.

As per the company’s release dated 7 February 2020, NWS for the second quarter this year has reported 6% decline in the total revenue to $2.48 billion compared to the prior year period. This decline is on back of 2 percent adverse effect due to overseas currency variations, subdued environment faced by the Book Publishing section, low subscription revenues at Foxtel, low print associated advertising revenues at the News and Information Services section and negative pressure at REA Group driven by the difficulties in the Australian housing market.

However, these falls were partly offset by the increase in the circulation and subscription revenue at the News and Information Services division. As a result, for the second quarter 2020, the net income fell 13% to $103 million and 4% decrease in the Total Segment EBITDA to $355 million.

Further, during the first half 2020, the company has posted decrease in the net cash provided by operating activities to $192 million from $358 million in the prior year period. The company during 1H 2020 has generated the free cash flow of $(96) million versus $26 million in the previous corresponding period.

Moreover, by next month this year, Foxtel and some of its subsidiaries have signed a subordinated shareholder loan facility deal with Telstra (that holds a 35% interest in Foxtel).

As per this agreement, Telstra will offer Foxtel ~$170 million to be utilised for financing the cable transmission costs as per a services arrangement amid the companies- Foxtel and Telstra. 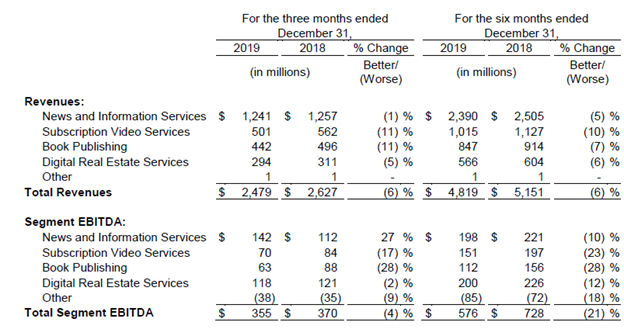 The company for FY 20, expects Pro Forma Group EBITDA to post low single digit growth on the back of decline in Metro FTA market in mid-single digits. The forecast reflects the weak consumer demand in various consumer facing businesses, and general subdued environment in the overall advertising market.

Proposed merger of Seven and Prime has been terminated:

The company will not acquire 14.9% stake in Prime Media Group after the company did not get requisite vote of Prime shareholders, who did not approve the proposed merger of Seven and Prime.

Refinanced the debt facilities for further 3 years to January 2023:

Southern Cross Media Group Ltd (ASX: SXL) formerly known as Macquarie Media Group, is one of Australia's major diversified media company that is into operation of regional radio and television stations in Australia, and also is into publishing of community newspapers in the United States.