Australia is the fourth largest producer of coal in the world after US, China and India. Australia Coal Price has fallen by 5.13% to 82.32 from last month and has declined by 21.82% in one year from the level of 105.29. As per contract for difference (CFD) that tracks the benchmark market for coal, the price of the commodity has declined by 25.33% from the starting of 2019. The price effects are seen on the stocks as well.

For 2019, National Australia Bank had lowered its forecasts by 7% for thermal coal price to $88/mt FOB Newcastle on the back of the global worries amidst US-China trade war. For April-June, the bank expects the price to fall by 12% to $82/mt; for July-September, it is expected to fall by 13% to $85/mt and for October-December, the price is anticipated to fall by 5% to $90/mt. However, the bank has kept its outlook for 2020 unchanged regarding the thermal coal price. For the four quarters of 2020, the bank expects the price of coal to be $93/mt, $90/mt, $88/mt and $90/mt, respectively.

Below are 4 coal stocks trading on ASX-

39% increase in the total saleable coal production during April 2019 Quarter: New Hope Corporation Limited (ASX: NHC), an Australian company that produces thermal coal through its operations in two open cut coal mines in South East Queensland, that comprise of New Acland project and the Jeebropilly coal mine located near Ipswich. The company during the March 2019 quarter has reported 39% increase in the total saleable coal production to 2.91 million tonnes compared to the corresponding quarter last year. There has been 61% rise in the total sales of the coal to 3.07 million tonnes during the quarter. The company during the April 2019 quarter had acquired an additional 10% interest in the Bengalla Joint Venture from Mitsui and now it has 80% interest in it. During the quarter, from its interests in Bengalla, the company had produced 90% more than the corresponding period last year to 1.7 million tonnes. The company has scheduled to complete the mining operations from the Jeebropilly coal mine by the end of calendar year 2019. As a result, the company during the April 2019 quarter, continued with its closure planning and the optimization of the land use post-mining. Moreover, the Queensland Department of Environment and Science had granted NHC the application meant for the amendment of the Environmental Authority for the Stage 3 Project of New Acland Coal Mine. This project requires a number of approvals, that includes Mining Leases, an Associated Water Licence and some secondary approvals in order to start its mining. The company needs to get these approvals on time to continue with its operations at New Acland mine and the employment of people currently engaged there. Additionally, during the April 2019 quarter, the index prices for export thermal coal had fallen by US$9 on the prior quarter to US$91.30. Meanwhile NHC stock has fallen 39.11% in three months as on June 6th, 2019 and is trading at a P/E of 14.05x. The stock settled the day’s trading at $2.590, down 0.39% as on June 7th,2019. 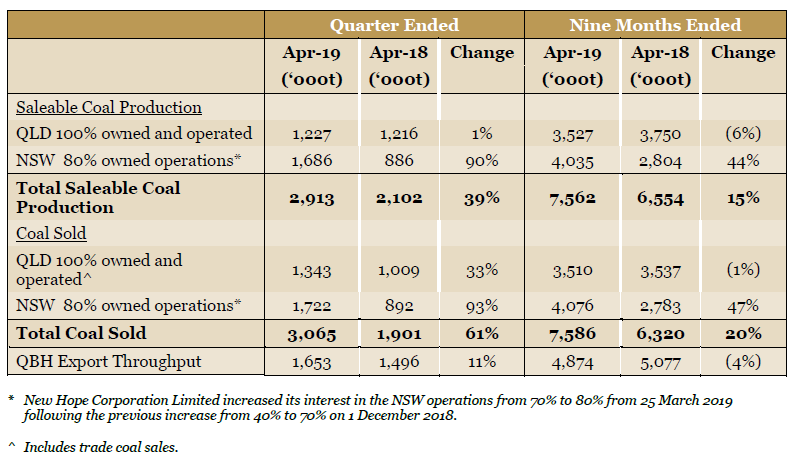 Lowered the production guidance for FY19: Whitehaven Coal Limited (ASX: WHC) is principally engaged in the development and operations of coal mines located in New South Wales. The company produces thermal coal, which is used for the production of steel and for the sale in the Asian key markets. As per IEA, the demand for coal to be used for both steel and electricity production in the Asia Pacific region (WHC’s key market) is expected to rise by 12% or 491Mtce (575Mt of 6,000 kcal/kg coal) by 2040. Further, WHC’s Managed saleable coal production is anticipated to increase substantially after the starting of the Vickery and Winchester South projects. Meanwhile, WHC’s Winchester South metallurgical coal project is now declared as ‘Coordinated Project’ under the State Development and Public Works Organisation Act 1971, which will allow the whole-of-government assessment of the project. The project, after it attains its full capacity, is expected to attain ROM production of approximately 15 million tonnes per annum. On the other hand, the company has lowered its production guidance for FY19, now expected to be in the range of 20.5 million tonnes to 21 million tonnes on a managed basis, compared to the previous expectations to be between 21.5 million tonnes to 22.5 million tonnes. This is on the back of the fall in the saleable coal output for the March quarter due to lower production from its Maules Creek Mine in New South Wales. During the March 2019 quarter, there has been 17% decline in total run-of-mine coal production to 4.9 million tonnes. As a result, WHC stock has fallen 14.29% in three months as on June 6th, 2019 and is trading at a P/E of 6.61x. The stock settled the day’s trading at $3.830, down 0.26% as on June 7th,2019.

Outlook for FY19: Yancoal Australia Limited (ASX: YAL) is an Australian company that principally operates ten coal mines across New South Wales, Queensland and Western Australia. The company for FY19 expects consolidated attributable saleable coal production to be approximately 35Mt. The company expects 2019 consolidated attributable cash cost (excluding Government royalties) to be about A$62.5/t. The capex for FY19 is expected to reach about A$28 million (equity share). Dividend payout for 2019 is projected to be 50% of the net profit after tax. Further, the company expects long term target for Net Debt / Operating EBITDA Leverage Ratio to be less than 1.5x. The company’s main focus is to reduce its debt. Meanwhile YAL stock has fallen 18.78% (source: ASX) in three months as on 7th June 2019 and is trading at a P/E of 4.76x. The stock settled the day’s trading at $3.200, down 0.62% as on June 7th,2019.

5% quarter-on-quarter increase in the production from Cook Colliery during March 2019 quarter: Bounty Mining Limited (ASX: B2Y), which has started trading on ASX from June 2018, offers mining contracting services for coal. The company holds interests in the three coal projects mainly situated in Queensland, namely Cook Colliery project, Minyango coking coal project and Cook North project. The company, ramping up the production at Cook Colliery Project, has undertaken the prefeasibility studies for Cook North and Minyango Projects. For March, the company’s ROM production was 56,108 tonne, in April it was 43,286 tonne and in May it was 58,532 tonne. During April, the company had made most of the relocations underground and from May the impact of the changes has started to show results. Moreover, from April, the company had drawn the full amount of the first loan facility of $20M, which has been given by Bounty’s largest shareholder Amaroo. The company has received the approval to increase the size of the debt facility from $20M to $35M. By end of June, the company plans to complete and present to the Management Board its business strategy, mine plan and financial forecast, which will form the blueprint for the company’s strategy for the next two years. The preliminary drafts have already been provided to the board. Additionally, the company is in discussion with Amaroo and many other potential sources to get funds for meeting the company’s obligations for repayment of debt and to finance multiple number of one-off commitments required to complete the acquisition of Cook, performance guarantees related with the company’s rail and port agreements, and the equipment required for the mining. Further, during the March 19 quarter, the company has delivered 5% increase in the production on the previous quarter from Cook Colliery to 146k run of mine tonnes. This reflects its best quarterly production since the mine got re-commissioned in January 2018. During the march 2019 quarter, there has been 5.6% decline in direct mine site (Cook Colliery) cash out flows than the previous quarter. As a result, B2Y stock has risen 17.28%) in three months as on June 6th, 2019. The stock settled the day’s trading at $0.094, down 1.053% as on June 7th,2019.