A Glance At 3 ASX AgTech Stocks – ROO, RGI, ABT

Agtech sector is the new hot thing, marking the growing awareness and utilization of technology in the agriculture sector. The Agtech sector is gaining momentum amidst growing population, increased food demand, environmental concerns, ecosystem degradation and infrastructural bottlenecks in the agriculture. The technological development revolves around vertical farming, farm drones and adoption of data science. There seems to be incredible opportunities with the technological disruption expected in the space, which aims at improving crop yields, farm productivity and agricultural produce.

With the great opportunity in the sector, investors are keenly eyeing the stocks in the Agtech space to diversify the portfolio and share expected gains. Let us look at few related stocks in this space:

Roots Sustainable Agricultural Technologies Ltd (ASX: ROO) is the company that develops precision technology for the agriculture to enhance the productivity of the crops yields using its Root Zone Temperature Optimisation (RZTO) technology. The company also operates in China & Israel. ROO stock rose 3.13% on July 18th, 2019 after the company lodged supplementary prospectus with the Australian Securities and Investments Commission (ASIC). The company’s management has decided to again obtain the shareholder’s approval in the upcoming general meeting to 1. be a participant in the Shortfall offer and 2. for the issue of the EverBlu Options on the same terms as the resolution approved at the company’s AGM.

The company’s Entitlement offer will close on 19th July 2019, 5:00 pm AEST. The company is raising up to $1,700,752 at the issue price of $0.04 per option. The company intends to use the funds raised for the expansion of the cannabis growers by increasing the activities related with marketing and sales in North America. The funds will also be used for increasing the sales in China and South Korea, developing the Spanish and Australian markets for the company, upgradation of system components that comprises of smart pipes, coils, agronomic field test and monitoring etc, for working capital that is required by the company to carry out operations and to incur the costs related with new offering.

At the end of March 2019 quarter, the company had cash & cash equivalents of US$563,000. On the other hand, ROO continues to expand in North American cannabis and agriculture sector and is undertaking strategic steps for the same. Since March 2019, the company has made RZTO sales to 4 North American clients. The company has also recruited senior management and operations personal in US to cater to the increase in the demand and management of RZTO installations in the future. ROO plans to take the advantage of the robust growth anticipated in North American cannabis sector, expected to reach US$35 bn in the time frame of four years. The cannabis sector in California and Colorado had delivered the sales of $4.08 billion in 2018 and by 2023 the North American cannabis market is projected to post the sales of total worth $35 billion.

Roto-Gro International Ltd (ASX: RGI) is an Australian based company that works towards getting the license for Roto-Gro System, which is automated rotary hydroponic advanced garden systems, meant to expand medicinal cannabis sector. The Company, well placed to revolutionise the global perishable food and cannabis market, has signed strategic partnerships with Gibio Inc. and Freshero Pty Ltd. 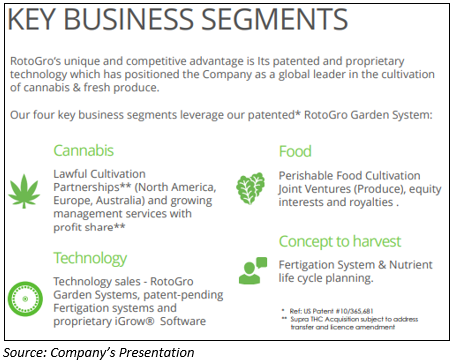 RGI has also signed Share Purchase Agreement for the acquisition of all the issued and outstanding shares of Supra THC Services Inc for. Supra holds a Dealer’s License which has been issued by Health Canada for growing & cultivation of lawful cannabis.

RGI plans to start the cultivation of cannabis for the first time in the first half of calendar year 2020. In 2019, the company had received the Purchase Order from Miracle Valley for the total amount of $2.3 million and had received the Purchase Order from Frozen Penguin, Phase 1 for the total amount of $600k. The company continues to work with Siksika Herbz GP Inc. This is through the partnership with Frozen Penguin, for developing the facility for the Phase 1 cannabis cultivation planned to involve 150 RotoGro Hydroponic Garden Systems.

On the other hand, RGI has very recently appointed Ms Melanie Leydin as Chief Financial Officer of the company, who has rich experience in accounting.

Abundant Produce Limited (ASX: ABT) is engaged in the development, production and commercialisation of vegetable seeds, in addition to the development of wide range of nutraceutical skin care products. 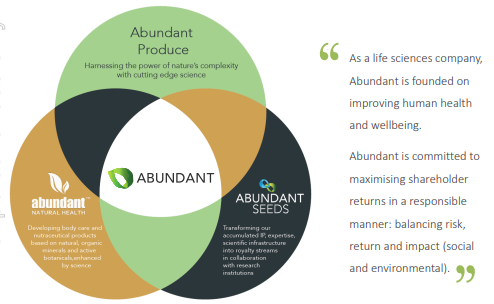 Share Purchase Plan: On 11 July 2019, ABT announced plans to raise up to $2.5 million through a share purchase plan (SPP) to fund its operations and expansion of the Abundant Natural Health business. The company will issue fully paid ordinary shares worth $10,000 to its shareholders at an issue price of 6 cents per share. Eligible shareholders have the opportunity to increase their shareholding without incurring brokerage, commissions or other transaction costs.

The plan is underwritten up to an amount of $1 million by Top Cat Consulting Services Pty Limited, which is controlled by ABT CEO Anthony Crimmins. The company will seek approval for issuing shares to the underwriter from the shareholders during a meeting scheduled on 15 August 2019. Additionally, the company would seek approval for Non-Executive Chairman Graham Brown and Non-Executive Director Seona Wallace, to each subscribe $25,000 for 416,666 shares at 6 cents per share.

Its net cash used in operating activities stood at $381,384 compared with $1,051,200 in the first half of FY18. At the end of December 2018, the company had cash & cash equivalents of $2,971,188. During the period, the company announced plans to raise $1 million for funding the development, production, marketing, distribution and sales of further ANH magnesium-based body care and nutraceutical products through the issue of 5 million shares at an issue price of 20 cents per share. 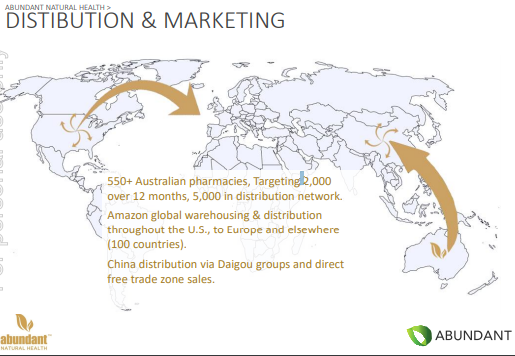