A Flick Through Modern Derivatives: Swaps

In this article, we will try to walk you through-Swap Derivative. Before diving into swap derivative directly, let’s start with the definition of the derivative for a better understanding and then discuss the complex swaps.

A derivative is a contract between a buyer and seller whose value depends on the price of an underlying asset. Derivatives are used by the investor for mitigating the risk of adverse price movement. There are majorly 4 kinds of the derivatives agreement. These are forward, future, options and swaps.

Amongst these four derivatives contracts, in this article, we will discuss swap derivatives.

Swap is a derivative contract under which cash flows or liabilities from 2 distinct financial instruments are exchanged between 2 participants, and in most of the cases, swaps involve cash flows centred around the notional principal amount like bond or loan. The institutions are the major players in the swap market. Swaps are relatively modern derivatives, which were first used in 1970.

Swaps are traded outside the stock exchange and happen over the counter. In swaps, the parties involved in the contract exchange the cash flow in future based on the present formula. One party pays a fixed price while the other pays a floating rate or variable rate. To explain the concept of swap more precisely let’s consider an example.

Let’s say there are two parties (say X and Y) two have entered into a swap agreement for a period of three years. Party X is the fixed rate payer, and Party Y is the fixed-rate receiver. Let’s assume that the swap agreement states a notional amount of $100 million at a price of 7%. In this transaction, party X is the fixed rate payer who agrees to pay party Y at a fixed interest rate of 8% while party Y agrees to pay party X at a floating interest rate of LIBOR+1%. 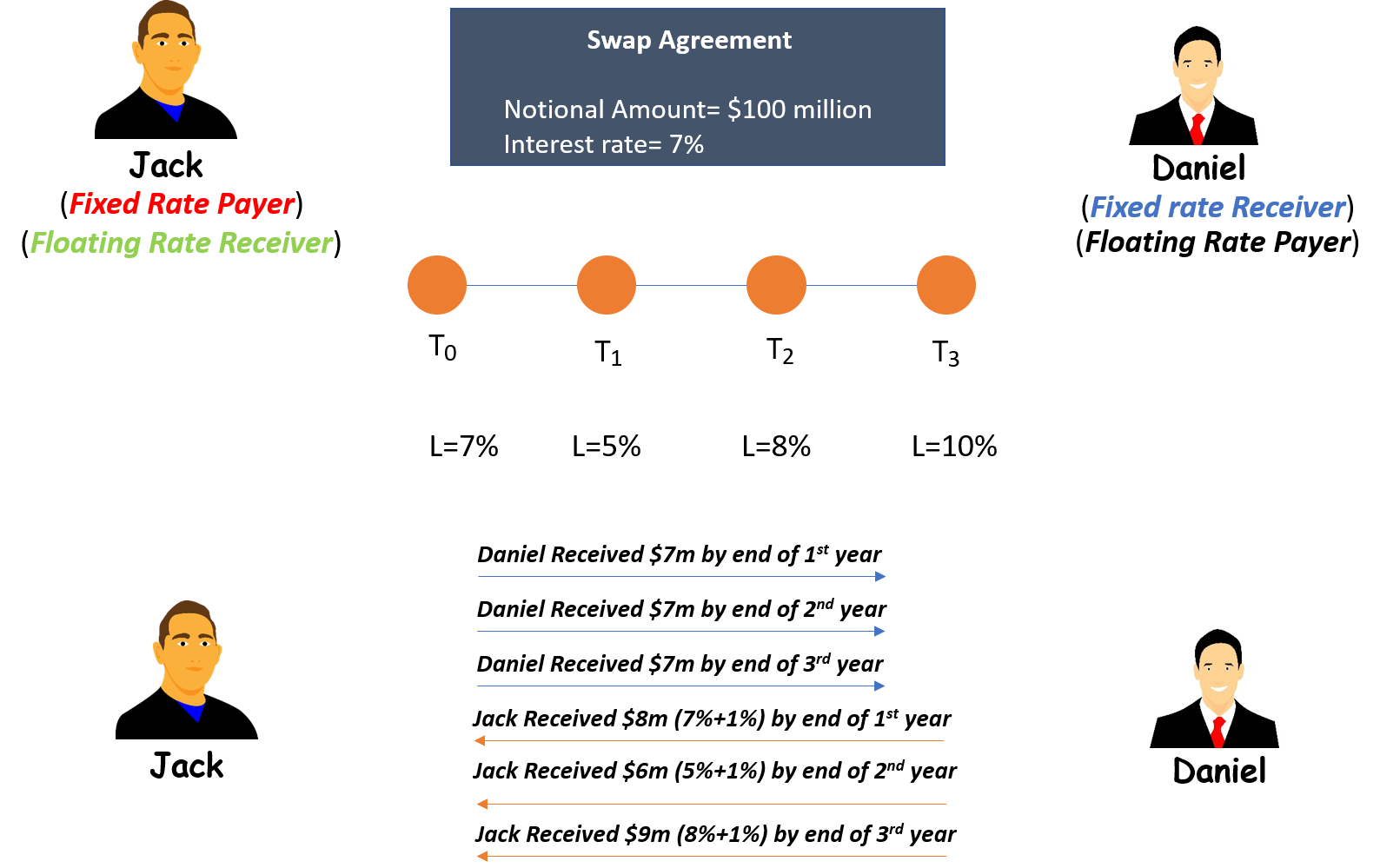 Now, the next question which can strike is whether there is any risk associated with the swap? The response to this question is: Yes. Swap being a derivative product involves risk and to overcome this risk is difficult. Thus, to minimize risk, the parties involved in the transaction conduct credit check of each other.

Another way to minimize risk is through the central counterparty or the CCP that works in a similar way the exchange works, where both the parties need to deposit certain deposit margin. Risk in the swap can be minimized but cannot be eliminated.

Plain Vanilla Swap is the most basic type of swap and is similar to those involving currencies and commodities. In this type of swap arrangement, the counterparties associated exchange the payment on a periodic basis based on certain parameters using the interest rate as the foundation for the agreement.

Parties basic objective behind entering into plain vanilla rate swap is to hedge against the floating-rate exposure. But it can also be used to get benefited from the declining rate environment by shifting from a fixed to a floating rate. Both the legs, i.e. fixed, and the floating are denominated in the same currency.

How does cross currency swap operate?

Now, company A’s subsidiary requires USD to fund its business. So, if company A which is situated in Australia, is looking to raise US$1 million. Company A can borrow the loan amount at 6% (AUD) and 10% (in USD)

Similarly, Company B is looking to raise $1.45 million to fund the business requirement of its subsidiary company situated in Australia. Company B can borrow the amount at fixed rates in the US at 5% while if it takes a loan in Australia, it might have to pay the interest of 9%.

Both the companies by the end of the agreement, swap back the principles as they did not continue the contract. Company A will pay B A$1.45 million and receive US$1 million, and company B will pay US$ 1 million to A and receive A$1.45 million.

The biggest advantage of a currency swap is that the loan is available to both the counterparties at the lowest available rate in the market.

Commodity swap occurs within the companies using the raw material to produce a finished product. The profit from the product is directly proportional to the prices of the commodity. For example, the Price of petrol will be impacted if the price of crude oil influences.

Credit default swaps provide insurance against the scope of the default by a borrower.

For example, Borrower A requires $20 million to fund his business. He goes to the bank and borrows $20 million against an interest rate of suppose 10%. Now, the bank would run a risk of loss, if the borrower fails to pay the bank its principle and interest amount. To mitigate such risks, there is a third party (insurer) which takes the risk to pay back the entire amount taken by the borrower in case the borrower defaults. This service is rendered to the bank by the insurer for a fee. This complete arrangement is called the credit default swap.

The zero-coupon swap is used by the companies to reduce risk on a loan in which interest is paid at the time of maturity. Banks issue such bonds to meet interest payments- end of maturity payments.