Most large well-known companies in Australia, such as the major banks and resources companies, listed on ASX account for a large part of Australian output and provide employment to a significant number of individuals.

The major Australian equity market, Australian Securities Exchange (ASX), came into existence as a result of the merger of the Sydney Futures Exchange and the Australian Stock Exchange. Currently, ASX is among the top-10 listed exchange globally measured in terms of market capitalisation.

Over the years, the Australian equity market has evolved significantly in terms of ways of doing business as well as growth and expansion. The market has undergone various fluctuations and endured through the domestic as well as global economic uncertainties.

Letâs take a look at few highlights from the ASX Group Monthly Activity Report for the month of September 2019:

Australia is a strong economy with the ability to minimise the exposure to the risks faced by other developed nations in the globally uncertain scenario. The geographical proximity of Australia with the key emerging markets along with sturdy commodity prices adds to the growth prospects of the country for the upcoming years.

The safe and reliable business environment of Australia for hosting business makes it strikingly attractive destination for foreign investors to invest. There can be several reasons as to why investing in an equity market would be a viable investment for an inexperienced as well as experienced investor. Below are some reasons:

Recently, to further strengthen Australia's financial architecture, key proposals in the CLERP 9 Paper aimed at ensuring the effectiveness and quality of the audit process were introduced. Some of them are:

In addition to this, the shares of a few Australian companies have experienced a dip in their prices or have been placed in trading halt by the ASX. To some extent, the dip in their prices was witnessed as an implication of persisting regulatory risks.

It is important to understand trends in profits since dividend payments to shareholders are largely driven by corporate profits. As per the RBA, the company profits of the ASX listed companies have increased by an average of approximately 10% per year since 1937.

More recently, with the stabilization in the market in terms of relative size, growth in the earnings has been significantly aligned with or a bit slower than the nominal GDP 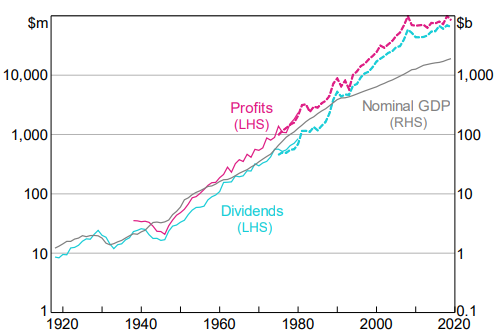 More than half of the Australian Securities Exchange by market capitalisation is comprised of financial companies and resources companies. However, it is worth noting that there have been significant fluctuations in the relative share of various sectors in the equity market of Australia over time.

With listed companies from diverse sectors and industries, including companies having major offshore operations, ASX provides an enhanced opportunity to the investors for better opportunities and exposure.

The employment of technology in the financial markets has facilitated the integration of financial markets and synchronisation of market investing ways. An investment in foreign equity markets can help to counter the risk involved with the domestic stock market and provides fortification against volatility to some extent.

The wide variety of investment alternatives provided by ASX to investors for portfolio development are constituted by the listing of a huge number of companies from multiple sectors like healthcare, technology, media, oil and gas, telecommunication etc.

The performance of the Australian equity market was noted to be relatively stronger than other global markets during the period after the global financial crisis, as an implication of the continuous demand from a Chinese-induced commodity boom.

Moreover, with almost all businesses open to foreign competition, robust regulatory frameworks and transparent business processes, Australia continues to be an attractive and dynamic destination for investment.

Australia has witnessed a remarkable uninterrupted expansion for a period of 28 consecutive years. Along with setting a record among developed economies, the Australian economy gained credibility and reliability as a low-risk and safe environment for business.

This fortunate record of steady growth validates the robustness of Australiaâs economy, coupled with empowered regulatory institutions in the country. With the strong infrastructure in the regulatory area, the Australian economy has developed the ability to respond to global changes. The steady growth of the Australian economy is fortified by a diversified and services-based economy.

Stepping into the shoes of an investor, one must realise that a more imperative figure for the investor is the dividend yield (the ratio of annual dividends to share price). The dividend yield reflects the profit that an investor earns as a reward for holding shares of a company.

The shares in the Australian equity market have not only provided yields in the form of dividends and recurring profits but have also generated significant appreciation in the share prices, thereby generating capital gains for the investors.

According to Reserve Bank of Australia, the share prices of the top 100 companies have increased by approximately 6% per year in terms of a geometric average, or by around 2% (after accounting for inflation) over the period of last 100 years. 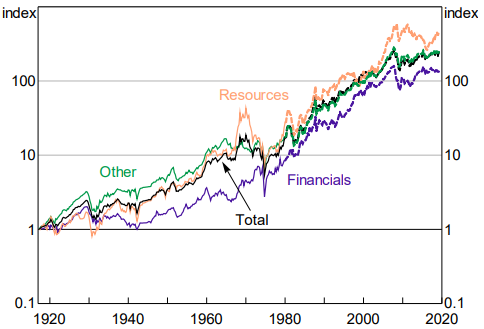 Notwithstanding the fluctuations of overperformance and underperformance in the long-term, it is notable that the different industrial sectors in Australia have performed quite similarly.

â2018-19 financial year might just be the biggest year for dividends at the market level, particularly if one includes special dividends and tax-effective, off-market buybacksâ

In conjecture to the above,

âLow inflation and a softening housing market in Sydney and Melbourne suggest the official cash rate is likely to remain stubbornly low at 1.5 per cent for some timeâ

The Australian equity market has grown over the past century to be one of Australiaâs most important financial markets.

All the trading venues and clearing and settlement facilities in relation to ASX are regulated and supervised by the Australian Securities and Investments Commission (ASIC). Moreover, the Reserve Bank of Australia maintains the oversight of financial system stability in Australia. The combined efforts of ASIC and RBA further strengthen the credibility in the operations of ASX.