5 Industrial stocks under discussion: Which one looks attractive?

The industrial sector comprises of the companies that manufacture and sell machinery, equipment and supplies that are primarily used to manufacture goods, which are generally sold to consumers.

Some examples of industries in the industrial sector are:

Let’s look at five industrial stocks and their recent updates.

Qantas Airways Limited is engaged in the business of international and domestic air transportation services, the sale of worldwide and domestic holiday tours and associated support activities.

Highlights of AGM for FY19

The company reported underlying profit before tax of $1.3 billion for FY19, which was lower than the record result the company achieved in 2018 due to headwinds it faced during the year. Due to higher oil prices, the company’s fuel bill rose by more than $600 million, and the company also suffered a $154 million hit from lower Australian dollar on non-fuel expenses.

In FY19, the company returned $1 billion through dividends and buy-backs and in the month of August 2019, it announced a fully franked ordinary dividend of 13 cents per share. Also, the company announced a $400 million off-market buy-back for up to 80 million shares.

Aurizon Holdings Limited is engaged in the business of:

The company announced that Dr Sarah Ryan and Mr Lyell Strambi will join the company board as Non-Executive Directors with effect from 1 December 2019. Dr Sarah has about 30 years of international experience in the oil and gas industry.

Mr. Lyell is currently the Chief Executive Officer of Melbourne Airport and has extensive experience spanning more than 40 years in the aviation and transport infrastructure sectors both in Australia and overseas.

CIMIC Group is an engineering-led construction, services, mining, public private partnership and services leader across the infrastructure, lifecycle of assets and resources projects.

CPB Contractors has been selected to upgrade a northern section of Melbourne’s M80 Ring Road. Approximately $331 million of revenues is expected from this design and construct contract

This project has been funded by Australian and Victorian Governments and is aimed at reducing congestion, enhancing the safety of drivers and increasing capacity. The construction is planned to begin in early 2020 and be finished in early 2023.

Auckland International Airport Limited is the third busiest international airport in Australasia as more than 75% of all international visitors to New Zealand arrive here. In the past 12 months, more than 20.5 million passengers have travelled through the airport’s terminals.

The total number of passengers in Auckland airport increased by 0.8% in September 2019 versus last year. The transit commuters up by 12.0%, international commuters were up by 1.0% and domestic commuters were down by 0.7%. 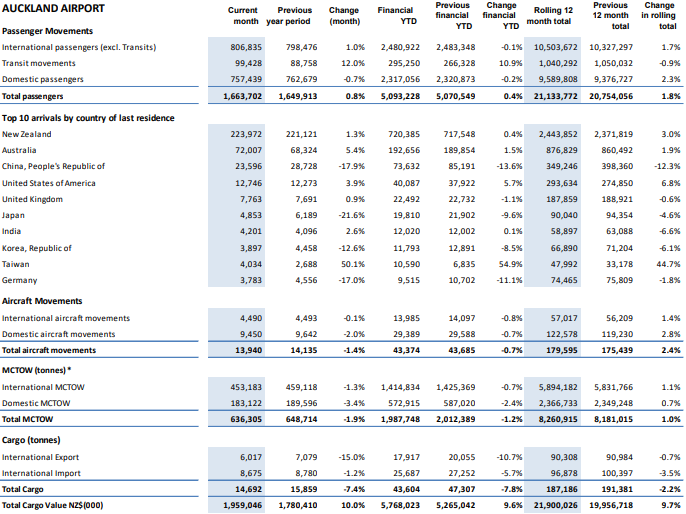 New Appointments in The Company

Recently, Elizabeth Savage became part of the company’s Board as an independent non-executive director (IND) director, following a go ahead for her nomination during the AGM for FY 2019. Christine Spring was also appointed as an IND of the company, after approval at the AGM.

SEEK Limited is engaged in the business of:

FY19 was a successful year for the company as it continued to deliver its purpose of helping people live more fulfilling and productive work lives and helping organisations succeed.

Although, the macro-economic conditions were challenging across its key markets, the company achieved strong financial results while continuing to invest across Asia Pacific & Americas and SEEK Investments, including its Early Stage Ventures.

The company’s key achievements during the year includes: