Resources Sector is one of the leading income generators in Australia, contributing to the development of the Australian economy. The resources sector consists of those companies that have their businesses generally in the exploration and production of minerals.

In this article, we would be digging deeper into the four ASX- listed resources sector companies. During the time of writing the report, on 31 October 2019, the S&P/ASX 200 Resources index last traded in red zone at 4,625.1 points, with a decline of 0.29% or 13.5 points compared to its previous close.

Letâs have a look at the four stocks with their recent updates:

Silver Lake Resources Limited (ASX: SLR) is involved with the exploration, development and operation of mines, as well as the sale of gold and gold/copper concentrate in Australia.

Change in Substantial Holding and Issue of Shares

SLR through a release dated 25th October 2019 announced extension of off-market takeover bid for all the fully paid ordinary shares in Egan Street Resources Limited and outlined the advantages of the companyâs all scrip Offer for the shareholders of Egan Street.

On financial front, the company has recently updated the market with results for the September 2019 quarter. To know more about it, Click Here

Alacer Gold Corp (ASX: AQG) is engaged into exploration and production of gold. The market capitalisation of the company stood at $1.89 billion as on 31st October 2019.

Alacer Gold Corp, through a release dated 29th October 2019 updated the market with its operational and financial results for the third quarter 2019.

Sundance Energy Australia Limited (ASX: SEA) is involved with the exploration for and development work as well as with the production of oil and natural gas in the USA region.

Galaxy Resources Limited (ASX: GXY) produces lithium concentrate and is involved in the exploration for minerals in Australia, Canada and Argentina.

A Quick Check on first Quarter of FY20 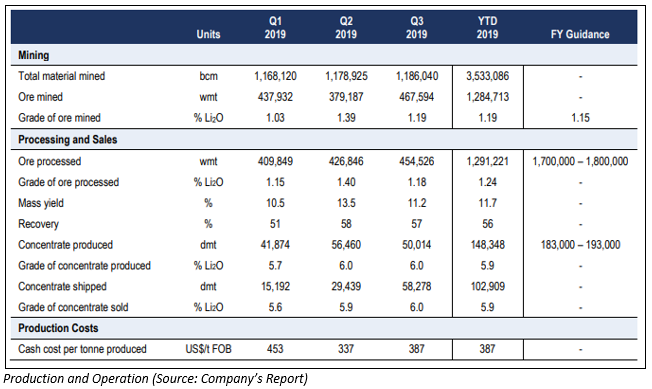