Lithium battery supply chain and performance across the electric vehicle industry remained soft in the third quarter of the year 2019, which nudged the ASX lithium miners to curb down on the production level to balance the demand and supply dynamics.

Galaxy Resources Limited (ASX: GXY)- an ASX listed lithium miner decided to scale back the mining rates by 40 per cent at the Mt Cattlin lithium mine in Western Australia. The Australian miner decided to slash the production to prevent intensive cash-burning at the operational sites amid falling grades and increase in required ore quantity.

GXY witnessed cash depletion at the end of the third quarter (ended 30 September 2019) amid weak lithium prices in the global market, which left the company with net cash of USD 169 million and a USD 32 million debt (as on 30 September 2019).

The net cash was down by over 4.30 per cent against the previous quarter of net cash of USD 176.3 million with zero-debt.

The weaker battery metals price had forced many other Australian miners to slash the production rate. Previously, ASX-listed lithium miner-Pilbara Minerals Limited (ASX: PLS) decided to limit the production due to weak spodumene prices in the international market.

Also Read: Syrah Resources Under Duress; What to Expect from the Graphite Miner Ahead?

Not just the Australia battery metal miners were facing a tough time in wading through the weak market conditions. The global giant-Glencore decided to curb its cobalt production in Africa over the weaker demand and prices in the international market, while the Chinese battery material mammoth- Tianqi reported a loss in the three months to 30 September 2019.

In a statement, Galaxy mentioned that the reduction in the operation coupled with cost initiatives, which the company is currently considering would allow the miner to keep a low unit operating cost and a positive operating cash margin.

On the mining counter, the total mined material during the quarter witnessed a 1 per cent increase to stand at 1,186,040 bcm; however, the quantity of ore mined surged by over 23 per cent to stand at 467,594 bcm.

The average grade of ore mined witnessed a slight decline during the quarter and stood at 1.19 per cent of lithium oxide, as compared to the previous quarter average processed grade of 1.39 per cent.

The overall mining and processing figures are outlined below: 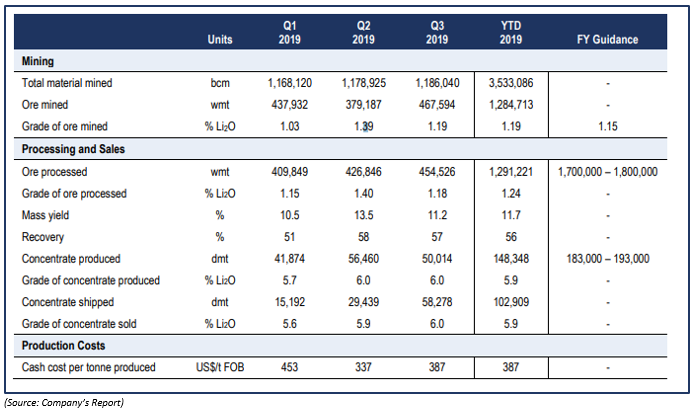 GXY completed three shipments during the September 2019 quarter for a total of 58,278 dry metric tonnes of lithium concentrate, which remained below the guidance range of 60,000 to 70,000 dry metric tonnes.

The cash cost per unit of the production increased substantially to stand at USD 387 per tonnes (FOB basis), which in turn, marked an increase of almost 15 per cent against the previous quarter per tonne unit production cost of USD 337.

However, as mentioned above, GXY decided to take cost reduction initiatives for the Mt Cattlin prospect and the company is undertaking review over all key contracts such as operational, sales, marketing, etc.

The third quarter of the year 2019 witnessed a slower demand for EVs amid escalation in the trade war, which also put pressure on lithium chemical prices in China and forced the Australian miners to limit production. Apart from GXY, many ASX-lithium miners are now increasing the production slowly over the slight improvement in global demand.

How GXY Reacted on Charts

On the daily chart, the stock of the company is moving in a continuous downtrend for quite some time, and the stock is currently trading below the mean of the conversion line and the base line (or Span A), which is currently at $0.949.

The Span A is currently below Span B (mean of 52 days high and low), which in turn, suggests a downtrend; However, the gap between both Span A and Span B is narrowing down, which represents a weakening downtrend.

The conversion line (mean of 9 days high and low) is crossing the light blue base line from above, and the crossover took place below Span A, which represents dominancy of short-sellers in the market. The 14-day Relative Strength Index is moving in line with the narrowing spread between Span A and Span B, which could suggest that the stock is entering the oversold zone.

GXY stock is beaten down over the falling lithium prices and high cash burning intensity, which in turn, reduced the long-term and short-term return profile of the stock.