Mr. Ian Gregory is a professionally well-connected Director and Company Secretary with more than 30 years of experience in the provision of company secretarial and business administration services. He has previously served as Chairman of the Western Australian Branch Council of Governance Institute of Australia.

Earlier, Mr. Robert Ierace was serving as Company Secretary; however, due to increasing finance and governance requirements, the company made a decision to separate the finance and secretarial roles in order to strengthen the company’s professional resource base. Consequently, Mr. Robert Ierace is retiring from the position of Company Secretary to focus on his role as Chief Financial Officer.

Gulf Manganese Corporation recently made a strategic step to diversify its asset base beyond Indonesia by entering into an agreement to acquire a strategic 20% interest in Iron Fortune Pty Ltd. This is expected to provide Gulf with a first to market exploration opportunity in Timor-Leste. As per the Gulf, Iron Fortune’s strong local relationships and geological knowledge of the region will help the company in growing manganese footprint outside of Indonesia.

To acquire the 20% interest, the company will have to make an initial payment of A$100k for exclusivity while the due diligence process is completed. Both the companies have agreed for coordination in order to develop a work plan and strategic direction. And once the due diligence process is finalised, the company will pay a further A$200k and issue shares worth A$100k; and Iron Fortune will issue Gulf a 20% stake.

As per the financial terms, Gulf will also commit to spending A$300k on the Business by 31 August 2020, and a further $300k in the following 12 months to earn 35% and then 51% interest in Iron Fortune. Once the 51% interest is earned, Gulf will complete a mining study and reach a decision to mine to earn a further 29% interest for a total of 80%. After which, the current shareholders of Iron Fortune will have the right to fund the mining and development costs on a pro-rata basis. In case, Gulf completes the acquisition to 100% of Iron Fortune, the current shareholders will receive a 2.0% Net Royalty on Profit.

As per terms of the agreement, Hamish Bohannan will be appointed Non-Executive Director of Iron Fortune Board.

The company’s management believes that this partnership can significantly de-risk the Gulf’s ore supply chain and help it in expanding its high-quality manganese mining footprint and processing capabilities. It is believed that this will help in the development of Gulf’s Kupang Smelting Hub facility. 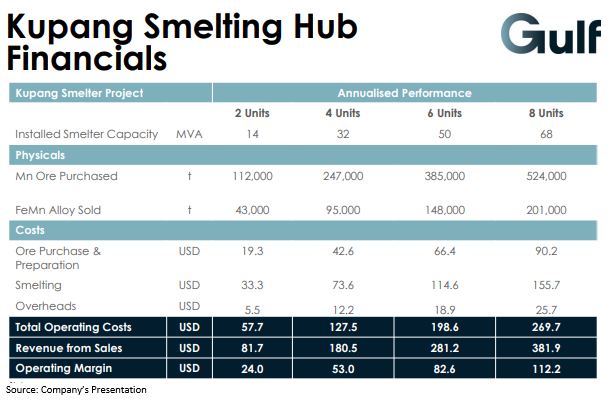 The agreement is subject to various conditions, which include:

In the June quarter, the company made substantial operational progress with several key milestones achieved, including the securing of the Company’s Direct Shipping Ore (DSO) licence in May 2019.

In the month of May, the Company’s Indonesian subsidiary, PT Gulf Mangan Grup (GMG) received its Direct Shipping Ore Licence from Indonesia’s Ministry of Trade, allowing GMG to export up to 103,162 tonnes of high-grade manganese ore per year.

Recently, the company vended High-Grade Timorese manganese mine, Putra Indonesia Jaya (PIJ) to its key Indonesian and Singaporean partners and announced its intention to supply the 100% of the ore produced from this mine to Gulf’s operations in Kupang. It is expected that ore supply from the mine will commence in the month of September 2019. By the first quarter of calendar year 2020, the ore supply is expected to increase to around 2,000 tonnes per month. 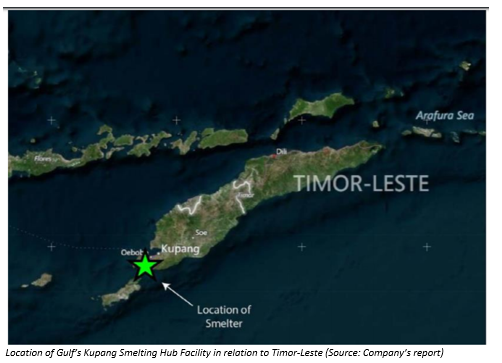 During the quarter, the company successfully raised A$3.24 million by issuing ~647.20 million shares at $0.005 per share. The company has also agreed to place further 45 million shares at an issue price of $0.007 to Acuity Capital for a total of A$0.32 million in accordance with the Controlled Placement Agreement with Acuity announced on 31 January 2018. As per the company, the funds received from the placements will be used to advance preparations for DSO start-up and for general working capital purposes.

By ramping up DSO exports over the coming months, the company intends to utilize the generated cash to finalise the commissioning of first two smelting hub furnaces at Kupang, which remain on-track for completion in the first quarter of next year. The company is also advancing discussions with debt funding providers and potential offtake partners to expedite this construction process.