Stocks of GameStop Corporation (NYSE: GME) and AMC Entertainment Holdings, Inc. (NYSE: AMC) were trending on Wall Street Friday. However, both the shares were trading flat.

Let's look at the recent performance of the stocks.

GameStop Corporation is a video game, electronics, and retail gaming company based in Grapevine, Texas. It is one of the leading video game retailers globally.

The stocks caught the eyes of the investors this year after their rapid rise fuelled by social media trends, hence the pseudonym meme stocks.

Recently, Citadel Securities have come under the scanner for its alleged role in the GME stock trading frenzy. However, on Tuesday, it rejected the claims that it forced Robinhood Markets Inc. (HOOD) and other firms to limit trading in GME stocks, which caused losses to small investors. 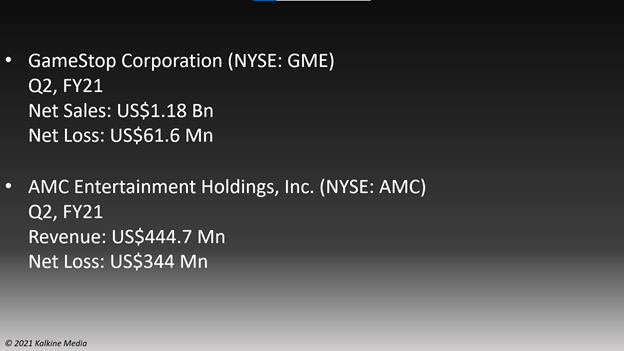 AMC Entertainment is a movie theater chain based in Leawood, Kansas. In addition, it is a theatrical exhibition firm and has operations in the US and various other international markets.

The company announced on Thursday that it implemented an option to buy back US$35 million of its 15 percent cash and 17 percent payment-in-kind (PIK) Toggle First Lien Secured Notes due in 2026. Meanwhile, the total value of the buy-back option is US$41.3 million, which includes the principal, accrued, and unpaid interest.

Bottomline
Both the stocks saw significant gains this year. Also, on Friday, the GME and AMC stocks were among the most discussed stocks on social-media platforms, which may have helped gain traction in the market. GME rose 917.22 percent YTD, while AMC jumped 1793.53 percent YTD. Nevertheless, investors should evaluate the companies carefully before investing in stocks.