In between May 2020 and July 2020, the business performance of Softcat was above management's expectation. The cash generation remained robust, and in light of that, it intends to resume the dividend policy. The Company would pay the interim dividend payment for FY20 that was cancelled in March 2020. The cancelled interim dividend was 5.4 pence per share. The decision over the final dividend payment for FY20 would be announced in October 2020. However, the reinstatement of dividend is dependent on no further disruption in the market conditions. 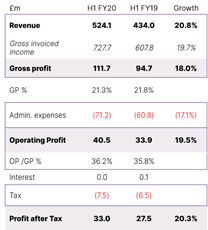 Performance by Segment in H1 FY2020

1-Year Chart as on September-10-2020, before the market close (Source: Refinitiv, Thomson Reuters)

Softcat is confident about the resilience of its business model in the current situation. It has a substantial liquidity headroom and does not have any debt of the balance sheet. It would continue to invest in the business and drive growth over the long-term. The Company is hopeful over the cash generation and its ability to reinstate the cancelled dividend.

Kainos Group PLC is a UK based technology company that provides digital services and digital platforms. The Company is partner of Workday Inc and it responsible for Software as a Service (SaaS) platform. The Company has eleven offices in Europe and the US.

The Company stated that its business performance was steady as it was supported by existing customers and revenue from diverse end markets. Digital Services segment was underpinned by the demand from the Public sector and National Health Service. New consulting contracts supported Workday Practice division. An automated testing platform, Smart, drove growth and new client win. As on 24 July 2020, Kainos Group had net cash of £62 million and did not have any debt on the balance sheet. The Company did not declare the final dividend for FY20, but it announced a special dividend of 6.7 pence per share for FY20. During the lockdown, the Company continued to provide important service such as NHS home testing service, Concardis smart pay in Germany and Workday deployment in Denmark. Kainos Group availed the job retention scheme of the UK Government, but it has decided to pay back the payments related to government support.

Growth drivers for the Company 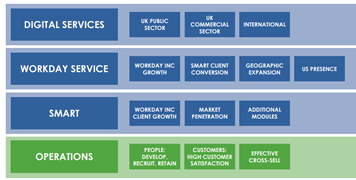 1-Year Chart as on September-10-2020, before the market close (Source: Refinitiv, Thomson Reuters)

Kainos Group stated that based on the current performance, the results for FY21 is in line with the expectation. The Company highlights that it has a strong pipeline and backlog; however, it is mindful of the current economic situation. The performance of the Company is supported by clients such as the UK Public sector, NHS and Workday division.