The share prices of Tullow Oil Plc (LON: TLW) on 21 October 2020 soared after the oil and gas company announced that it has secured an approval from the government of Uganda for divesting the $575 million sale of Uganda assets to Total SE. The company’s stock ended the day around 25 per cent higher at GBX 20.52.

It is to be noted that the explorer has been looking forward to close the divestment in the Lake Albert Development Project since 2017.  Tullow Oil’s endeavour was continually thwarted by tax divergences. Active in more than 130 countries, Total is a French energy company that produces and markets fuels, natural gas, and low-carbon electricity.

Tullow Oil informed that the Uganda government and the Ugandan Revenue Authority have brought into effect a binding Tax Agreement that would reflect the pre-agreed principles regarding the tax treatment of the sale of Tullow's assets in Uganda to Total. Additionally, Uganda’s Minister of Energy and Mineral Development provided consent on transferring Tullow Oil's interests to Total as well as the transfer of operatorship for Block 2.

Key notes from the deal

Once the deal gets completed, Total would make the payment of $500 million in cash. The rest amount of $75 million would be transferred when a final investment decision on the project would be taken. It is to be noted that Tullow Oil remained additionally entitled for obtaining contingent payments linked to the oil price. This conditional disbursement linked to the oil price would happen after beginning of production activities. 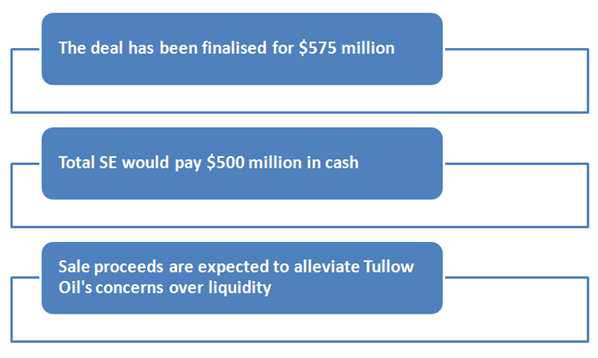 Earlier, Tullow Oil had sought relief from its lenders to evade blowing through debt covenants. It is believed that the proceeds from the asset sale would be useful in restoring stability. Many experts agreed that the approval from the Uganda government is a step in the right direction and would act as a major respite for Tullow Oil.

The sale proceeds are expected to alleviate concerns over liquidity, which was $500 million at mid-year and decrease net debt and leverage to a certain extent. It is to be recalled that in April this year, Tullow Oil had stated that it had agreed to sell its Ugandan assets to Total and the transaction amount would be used to lessen its net debt, make the balance sheet stronger, besides carrying ahead the company towards a more conventional capital structure.

Tullow Oil said that it expected the transaction to close in near future after completing some routine pre-closing activities with Total. It additionally mentioned that all the necessary government-related conditions for closing having been successfully completed.

Also read: How Are Global Crude Oil Giants Responding to the New Normal?

Early this month, Tullow Oil announced completion of bi-annual redetermination of its RBL (reserve-based lending) credit facility with $1.8 billion of debt capacity that has been agreed by the lending syndicate. This approval led the company to maintain $500 million liquidity headroom of undrawn facilities and free cash at the beginning of the fourth quarter.

On 9 September 2020, Tullow Oil released its half yearly results for the six months ending 30 June 2020. The oil and gas exploration company posted revenue of $731 million (2019: $872 million) and gross profit of $164 million (2019: $527 million). It recorded loss after tax of $1.3 billion, which was driven by exploration write-offs and impairments that combined for $1.4 billion pre-tax. While the company made capital investment of $192 million, the decommissioning costs were reported to be at $38 million. Due to weighting of cash taxes, cash capital expenditure, differentials, redundancy costs, and working capital, there were negative free cash flow during the period. Net debt was recorded at $3.0 billion.

Tullow Oil is an independent oil and gas company with focus on Africa and South America. It has interests in more than 70 exploration and production licenses across 14 nations. The company’s exploration portfolio focuses on a balance of near-field and short-cycle projects. In addition, the company gives spotlight to new plays in proven basins and selected frontier areas.