Highlands Natural Resources Plc (HNR) is a UK-based oil and gas company, providing technical products and services. The company identifies the portfolio of projects which generate stable revenue of 80 per cent and has the potential for stimulating capital appreciation. The companyâs area of operations includes Colorado shale, Highlands Water Resources, Enhanced oil recovery, Kansas nitrogen discovery and Montana Project. The group mainly focuses on acquiring oil and gas producing assets and other mineral and technology rights allied to the oil and gas division.

The company has a prospective portfolio of assets in the United States. The core assets are Colorado Shale, Kansas Nitrogen, Montana, Enhanced Oil Recovery, Water, and DT Ultravert. These have been acquired at a low cost and offer the group with a range of value catalysts and potential revenue streams.

The company through a subscription of ordinary shares raised minimum funding of Â£1.27 million to establish a cannabidiol subsidiary in Colorado, US. The company issued shares at 8.5 pence per share to raise the required funds. The raised funds were used to create a new subsidiary Zoetic Organics which will develop an organic and vertically integrated cannabidiol operation.

On 14th June 2019, the company has launched a new CBD (cannabidiol) brand in the United States with the first shipment of products has been scheduled on June 17, 2019. The new CBD brand is called Chill (www.thechillway.com).

Chill is a new variety of CBD products, initially comprising of CBD infused herbal smokables and hemp flower. The product will shortly be extended to chew pouches. As previously announced, the products will be offered to buy in 18 Schrader Oil convenience and gas stores. On the Chill website, the products will be available to buy in the United States shortly.

As part of the subsidiary company Zoetic, Chill will produce CBD products as tobacco substitutes for smokers and enthusiasts. All its products will be formed from natural sources and will be made in Colorado, the United States.Â Apart from the hemp flower smokables, Chill's CBD products will have zero tetrahydrocannabinol (THC). The product will be a third-party tested to make sure they are free of chemicals.

Zoetic remains to develop at a quick rate and the group anticipates launching its 2nd brand and additional products in the coming weeks.

On 16th April 2019, the group declared that Nick Tulloch is a new Company Secretary and Finance Director.

The companyâs total oil production from 8 wells was around 2,700 Bopd and combined gas production stood at 4,000 Mcfpd (approx.) from East Denver. The company operates 5 new wells at choke size of a 25/64th inch and sixth at 29/64th inch. The products manufactured by Zoetic Organics, the wholly owned subsidiary of Highlands, will be available to Schrader Oil convenience stores and will generate initial income in June. Zoetic had established its own website for direct retail sales. 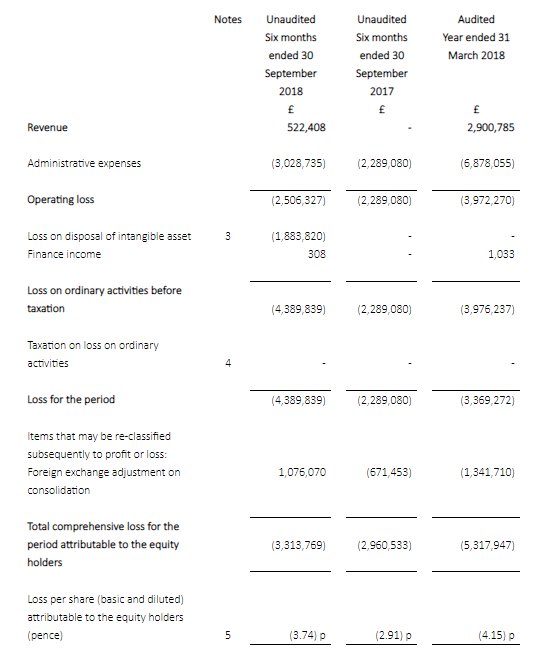 In the first half of the financial year 2019 ending 30th September 2018, the companyâs reported revenue was Â£522,408. The company had started generating revenue from its 3 projects in the current period. Till the last financial year, the company was in the development phase and was relying on its cash balance.

At the time of writing (as on 17th June 2019, at 2:32 PM GMT), shares of the Highlands Natural Resources PLC were quoting at GBX 9.3/share and decreased by 1.59 per cent as compared with the previous day closing. The outstanding market capitalisation of the group stood at Â£13.50 million and is listed on the LSE (London Stock Exchange).

From the SMA (simple moving average) standpoint, shares of the Highlands Natural Resources PLC were trading considerably below the 60-day and 200-day simple moving average prices and significantly below the 30-day SMA price level. However, it has time and again proven right that, if a stock is trading below its 200-day, 60-day and 30-day SMA price level, it shows the stock is in a downtrend and carries the potential to move down further.

The stock has delivered a negative beta of 0.21x, which indicates a negative correlation of the stock as compared with the benchmark index.

Although the companyâs revenue increased significantly in the first half of the financial year ending 2019, the profitability margins have remained stagnant or declined. The company operates in a challenging environment which requires continuous investment, sometimes at the cost of profitability, to stay ahead of the competitors. The companyâs cash generation from its operations remained negative for the period. The company is majorly relying on its East Denver Project to generate revenue and uncertainty due to political or economic factors will hamper the companyâs operations. The company might fail to obtain further financing for acquisitions and business development.

The company Executive Chairman and Chief Executive Officer (CEO), Robert Price, said that the delivery of the first product for retail within three months of commencing operations is an extraordinary achievement and is a testament to the solid work of all the team at Highlands and Zoetic.Â The company is optimistic about the initial sales and will update investors in due course.