The company, which was founded in 2014, aims to bring about disruptive changes to the real estate agency business by bringing in information technology to deliver greater efficiency and transparency. The launch of its operations in the United Kingdom in 2014 to much fanfare, received a warm welcome from the general public who were quite generous to the company, as it saw its revenues reach £136.5 million during the five-year period to 2019.

The company while trying to create a new segment in an old business become too hasty in its execution in order to become the world leader of online Real Estate agency business. It made advertising and selling expenditure at a pace which was not matched by adequate response from the consumers, resulting in the company suffering losses. The experience gained in the markets of United Kingdom and Canada were not very helpful to garner market share in United states and Australia.

On the other hand, the business environments in the United Kingdom and in larger continental Europe were fast deteriorating because of the ill-effects of the uncertainties of Brexit. Consumer confidence in The United Kingdom was low, and the housing market had become soft with many of the real estate players and agency businesses reporting weak numbers. Hence the company decided to do a strategic review of its operations and came to the conclusion that it must curtail its operations in loss making units of United States and Australia and focus its resources on profitable and growing operations in United Kingdom and Canada. The company announced its withdrawal of operations in Australia in May 2019, followed by an announcement of withdrawal of operation in the United States of America in July of 2019.

Though the business model of the company has been a stupendous success in its home market and in Canada, it seems that there is still a long way to go to develop a complete understanding of how this business segment will shape up. The company’s actions were ill timed and hasty as its actions were met with either a deteriorated business environment in continental Europe or lacklustre response from the markets in the United States and Australia as these did not respond in a way it had expected them to.

The business model of the company is a success given the way it is performing in the British and Canadian markets; it would have been prudent on its part if it had spent some more time in these markets and entered back into the United States and Australian markets during a favorable period.

The shares of the company are listed on the AIM segment of the London Stock Exchange where they trade with the ticker name PURP. 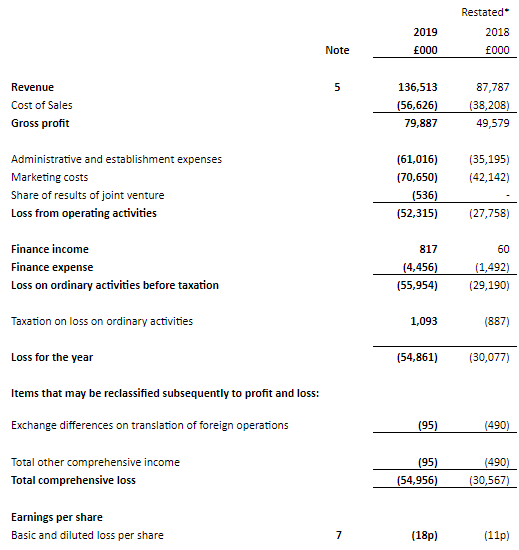 Price Chart as on 24 September 2019, before the market close (Source: Thomson Reuters)

The company this year decided to exit its businesses in both the Australian and the United States markets  and decided to channelize its resources  to its operations in United Kingdom and Canada, where it has a strong, well-heeled presence and where it sees significant opportunities to grow its market share and deliver good value to its shareholders.

Over the five years period since the company was launched in the United Kingdom, its home market, it has been able to bring about fundamental changes in the way real estate agencies operate in that country. The company’s unique selling proposition of a differentiated, technology-led operation to deliver value to consumers as well as profitability to market participants will enable it to make traditional real estate agency business obsolete and bring in greater levels of efficiency and transparency to the industry. However, the current economic and political uncertainty in the United Kingdom translates to challenging market conditions with trading volumes trending downwards.