Eden Research Plc (LON: EDEN) is a Cirencester, the United Kingdom based chemicals company, whose primary business interest lies in the technology development and commercialisation of its products in the crop protection, animal and human health, as well as consumer products and biocides segment.

In the crop protection segment, Eden Research is the only company listed on the London Stock Exchange, that provides biological solutions, that solve the problem of plant diseases such as powdery mildew and downy mildew. As per the company’s assessment, this space is expected to be at a value of US $8.8 billion by 2022. The company’s products in the pipeline from this segment include Fungicides, Nematicides, Insecticides and Molluscicides which are used for Slug and Snail Control.

In the Animal Health space, the company’s technology development revolves around Terpenes, that is a proven solution for a range of pathogens that have an impact on Animal health. Terpenes improve and effectively treat various animal conditions, especially the likes of skin conditions as well as ear infections. This space is expected to exceed the market value of around US $33 billion by 2020. The company’s products in the pipeline from this segment include Companion Animal, Bio-Control, Parasite Treatments and Insect Sprays.

In the Consumer Products segment, the company’s research development, as well as commercialisation, stays focused on its trademarked Sustaine™ technology, that has applications across sectors such as oral care, human haircare, deodorants and headlice. Its Biocides segment products have applications across spaces like hygienic surface treatments and agro-industrial. The company’s products in the pipeline from this segment include Head Lice Treatment, Fragrances, Wound Care, Food flavourings, Odour neutralizers as well as Active ingredient supply and delivery. This space is expected to exceed the market value of around US $10.5 billion.

The company’s current addressable market is worth around US$1.2 billion with sales across 2 continents, which is expected to expand to 6 in the coming years. The company’s two most sought after technologies include Sustaine™ and Terpenes.

Eden Research Plc on 7th January 2020, announced that three of its active ingredients, which are registered with the European Union have received an approval for use in organic farming, post inclusion in the European Union's Organic Production Regulation (OPR).

This is important for the company and highly commendable, primarily because of the growth and development of the organic farming segment in the broader European agricultural landscape, which is in line with the company’s future business strategy. As per the last reported data of 2017, organic farming constituted 12.6 million hectares of agricultural land across the member nations of the European Union, which amounted to around 7 per cent of the agricultural land being used at the time across the continent. This amounted to a growth of 25 per cent in the five years since 2012. This growth has also been supported by conversion from conventional farming to organic farming especially in countries like Italy and Spain, where the conversion surged by approximately 60 per cent.

Post this approval on the mentioned products, the company will be able to support organic farmers by providing them with organic products that can efficiently be utilised to complete the same tasks as those of Chemical Pesticides, within a similar time frame, thus providing an effective as well as a sustainable alternative.

The CEO of the company, Mr Sean Smith, in his statement regarding this approval, said that this development opens up new commercial horizons for the company, which is relevant to all the products of the company and hence can become a big catalyst for the growth, especially in the near future.

On 18th September 2019, the company had presented its half-yearly report, which highlighted its financial performance during the six months ended 30th June 2019. The company reported that the revenue for the period stood at £0.58 million while the product sales for the period stood at £0.45 million. Operating loss for the reported half-year period reduced to £0.63 million as compared to a loss of £0.93 million in H1 2018. The company also reported an upfront and milestone payments of £0.13 million for the half-year.

The company presented its outlook for the future, which was primarily driven by the successful approval of the company’s second product, Cedroz, which is a bionematicide, in the southern and indoor crop EU regulatory zones, and the emergency approval granted in Italy, the company anticipates that on the back of these approvals, the sales and revenue could increase significantly in the future. 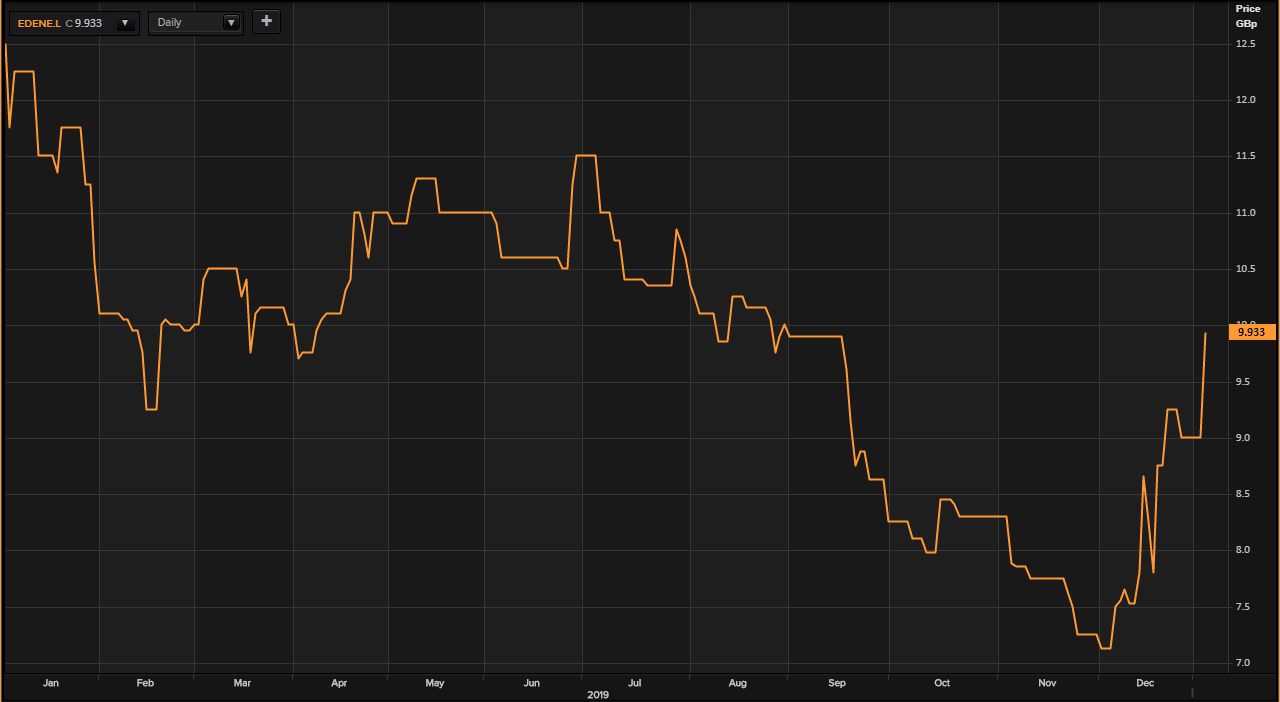 (Source: Thomson Reuters) Daily Chart as on 07-January-20, prior to the closing of the London Stock Exchange

As on 7th January 2020, at 02:08 P.M GMT, by the time of writing, Eden Research Plc’s stock price was reported to be trading at GBX 9.933 per stock on the London Stock Exchange, an increase in the value of 10.37 per cent or GBX 0.933 per stock, in comparison to the previous day’s closing price, which was reported at GBX 9.00 per stock. The market capitalisation of the company stood at GBP 18.65 million in reference to the current stock price.  Eden Research Plc’s share has given a positive return of 32.44 per cent in last one month.

The growth prospects for the company are steadily improving, after the successful final authorisation of Eden's second product, Cedroz, in the southern and indoor crop EU regulatory zones, along with the emergency approval in Italy, coupled with the emergency approval in France for the use of Mevalone for the treatment of storage diseases on apples. Now, with the three of its active ingredients, (registered with the European Union) receiving approval for use in organic farming, a significant boost in sales can be expected for the company in the coming future.