The cryptocurrency market has been reeling under the crypto winter phenomenon for some time now. When the cryptocurrency market hit the US$3 trillion market cap after Bitcoin achieved its all-time high of US$68530 on 9 November 2021, many had believed that it would end the year on a positive note and would have a good Q1 2022. But what followed next was something a very few market players had anticipated.

While the crypto market did manage to end the year 2021 over US$2.21 trillion, the new year started on a poor note. It got worse with Bitcoin & Co. dragging the global crypto market cap down due to a prolonged bearish phase, with almost all leading cryptos, such as Bitcoin, Ethereum, Solana, Cardano, etc., bleeding under the impact of recent Federal policy developments in the US. In fact, on 23 January, Bitcoin fell to US$34,786 dragging the crypto market cap along with it.

Also read: Is UK’s CBDC as good as shelved?

At the time of drafting, as of 24 January, the global crypto market cap stood at almost half of what it had in November last year at US$1.54 trillion following a prolonged bearish trend.

Many experts have started comparing the latest crypto crash to the infamous 1929 Stock Market Crash. As per historians and experts, the 1929 Stock Market crash, which is considered as the worst in the US history, happened after a prolonged period of speculation. In a way, the current cryptocurrency market crash mirrors the similar period of prolonged speculation as in 1929. On 24 October 1929, also dubbed as ‘Black Thursday’, the market saw a fall of well over 11% of its value during the intra-day trading, following which the Great Depression kicked off. 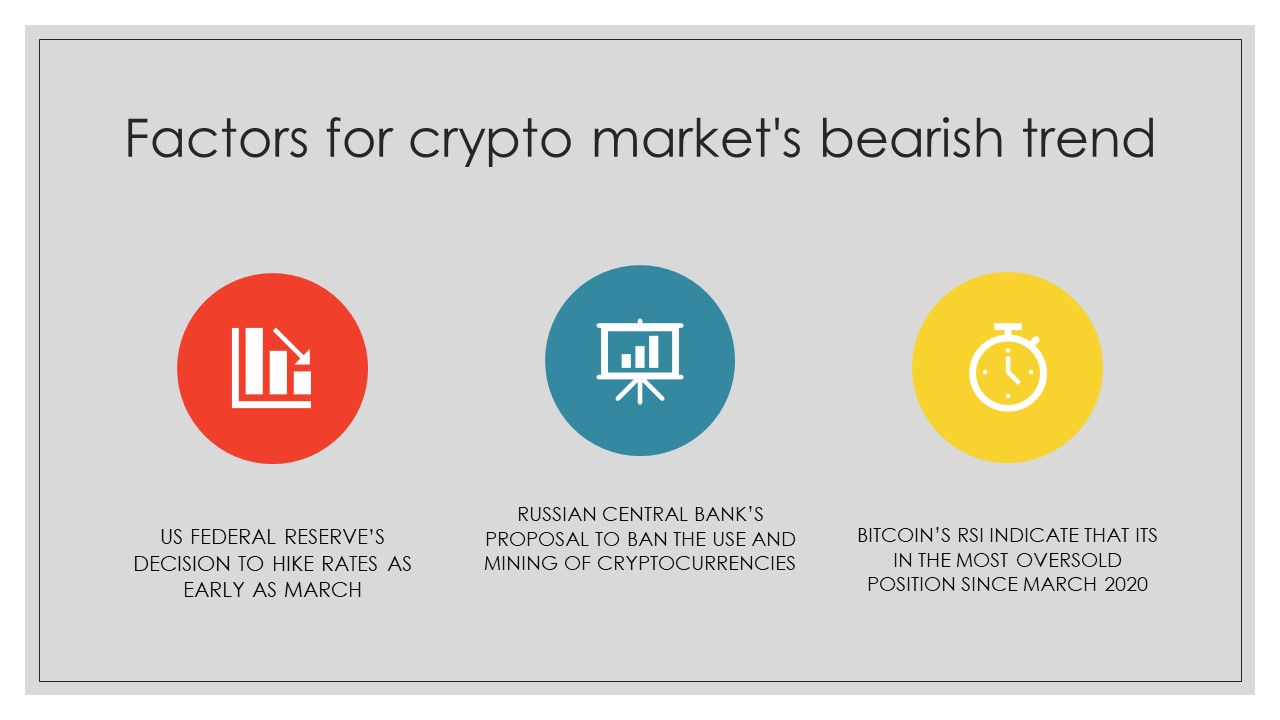 As far as the present crypto market is concerned, in the last seven days, the Bitcoin lost 21%, Ethereum lost 30.62%, Cardano lost 35%, and Solana lost 41% of its value. A few experts have stated that if the current trend continues, then the crypto winter could well be replaced by a ‘crypto ice age’, which could very well see Bitcoin go under the US$30,000 level.

Though few experts don’t expect Bitcoin prices to fall that much, but many believe that the market would be highly volatile and will be affected by the news of Federal Reserve interest rate hikes, leading to further fall in prices.

The Federal Reserve interest rate hikes coupled with the Russian Central Bank’s proposed blanket ban on cryptos seem to have a dual impact on the crypto crash. Analysts from US-based UBS said similar tremors were felt in 2018 when Bitcoin and other cryptos fell more than 75% from their previous highs following a severe sell-off due to rumours of regulatory crackdown in Asia and reducing volumes.

Initially, Russia’s proposed blanket ban had a minor impact on the market. But the following day, the cryptocurrency market went on a free fall as the Bitcoin’s prices fell from US$43,413.02 to US$38,258. This is the second time in the month that BTC prices slumped below US$40,000, sending the market into a tizzy. Within 12 hours of the news, almost US$50 million were wiped out of the overall crypto market on 21 January (Friday).

Besides, Bitcoin’s Relative Strength Index indicate that it is currently in the oversold position since the start of COVID-19.

At present, no one can actually anticipate how far the market will revive from the current lows. For now, investors may choose to shy away from fresh investments and hold on to their tokens till the market bounces back.