A London based hospital trust has been given indications that the AstraZeneca-Oxford University vaccine candidate could be made available by as early as 2 November 2020, according to sources. Security concerns are also being addressed and hospitals are liaising with the police force in this regard.

At the same time, it is known that the Oxford vaccine candidate is under the final stages of clinical trials. The human trials had begun way back in April 2020, involving close to 20,000 volunteers.

Moreover, the National Health Service (NHS) of the UK government was preparing for a vaccination program before Christmas, revealed recent media reports. In this regard, the NHS staff might be receiving a coronavirus vaccine soon, as per an email sent by the health service to its employees.

The NHS has a track record of implementing vaccination programs across the nation. Whenever a vaccine candidate is ready to be delivered, NHS would be working fast with its healthcare partners and for an effective deployment of the vaccine, explained an official from the NHS.

Nonetheless, the Department of Health maintained that any vaccine could be deployed only after its safety and efficiency is completely authenticated by an independent regulatory body.

Glen Burley, chief executive of George Eliot Hospital NHS Trust, Warwickshire recently conveyed to its staff that the Trust, in line with NHS organisations across the UK, was told to be ready to begin with a Covid-19 staff vaccine program in early December 2020.

The vaccine would be given in two doses, spread apart with a 28-day gap, added Burley. 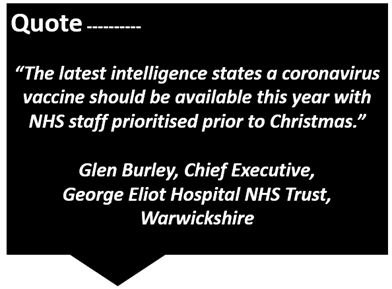 Matt Hancock, the UK health secretary wanted the freedom of fast operations if things progress quickly, though experts still think that a jab would not be publicly available before early 2021.

Therefore, Hancock’s department has put in place robust measures for British medical agencies to authorize a Covid-19 vaccine for UK patients, if media reports are to be believed.

Further, the UK government has also introduced new laws that would allow the country to bypass the approval process of the European Union in case the vaccine is available before end of December 2020, the timeline for expiry of post-Brexit transition period.

The most likely vaccine candidate that would be made available to the NHS employees would be the AstraZeneca candidate in its final trial stages, being prepared in association with the Oxford University.

Some experts said that Burley’s timelines could be overly ambitious and even premature. The reasons they indicate for such an opinion are the fact that there is minimal progress till now on when exactly the vaccine would arrive, no official announcements, and no dates shared.

On the contrary, many scientists and healthcare experts talked about a later date for availability. For instance, Sir Patrick Vallance, chief scientific advisor, UK government said that a vaccine might not be available in the nation before the spring of 2021.

Similar opinions are being voiced across the globe.

For instance, Dr. Anthony Fauci, expert on infectious diseases, US government recently noted that the way thing were progressing, the world would know about the safety and efficacy of a vaccine only by end of November or first week of December 2020.

Fauci also explained that one would need to wait for several months after December 2020 for an amount of dosage that would be sufficient to vaccinate everyone against the deadly virus.

Further, Leo Varadkar, deputy Prime Minister, Ireland, said that a vaccine approval is on cards in the next few months. This would enable vaccinating the most vulnerable people at a mass scale by the first half of 2021.

The German government is planning to create sixty vaccination centers across the nation for proper storage. In this regard, the country’s health ministry has asked its federal states for addresses of the relevant premises by 10 November 2020.

Germany was planning for a vaccine availability by early 2021, with enough supplies for all within six to seven months after that.

Britain has stockpiled 340 million doses of the coronavirus vaccine from six different places, pointed out sources. However, Kate Bingham, Head, UK vaccine taskforce expressed that there are still many uncertainties surrounding the availability of the vaccine which need to be addressed.

She added that in all probability, a Covid-19 vaccine would need to be administered in more than one dosage.

Bingham told that right now even flu jabs were quite commonly being used as a protection against the coronavirus. Admitting that they were only partially effective, she stressed that they were better than having no protection at all.

Experts are cautioning that strict health and safety restrictions would need to be continued with even if a clinical trial proves successful in the coming days. Masks might be required till the end of July 2021, they lamented. The reason is that a majority of the total population would need a high immunity against the coronavirus before the risk of catching infections is minimised.

The total number of reported cases with coronavirus infections for 25 October 2020 was 19,790 in the UK. It was 16.5 per cent more than a week back. This took the total reported number of coronavirus cases in the nation to 0.87 million. Many experts also believed that the three-tier system recently introduced across England might not be sufficient to quickly contain the rising daily cases.